Size of text in the new Retina MacBook Pros

I saw there is a new version of MacBook Pro is out which has Retina Display. This means there are more pixel per inch. Does this imply that text is smaller?

It depends on your setting.

So basically changing the setting offers: 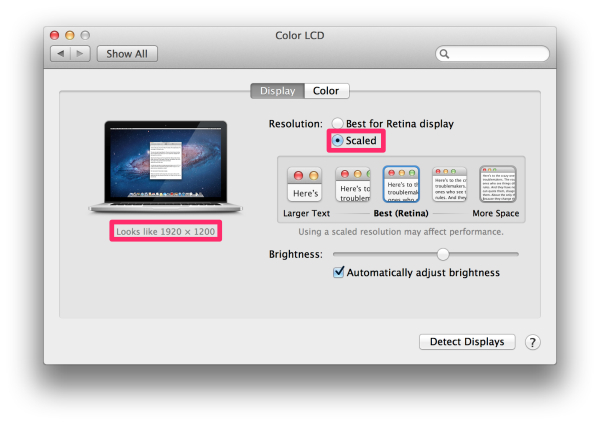 As you can see on the new MacBook Pro page (under the Retina-feature item), if you use the binoculars on the text, it doesn't look smaller. It just looks much, much, much sharper!

It's the same as the iPhone 4(S) comparing to the iPhone 3G(S). You don't need better glasses to read the text, because it's not smaller. It's just much sharper and easier to read.

Maybe, I can make my point even better with the iPad Retina page. You'll see you can fit as much text on both the Retina screen as the normal screen. It's just sharper!

No. Text will be the same size. It will just have two times the resolution in each direction. Just like the difference between the original iPad and the 3rd gen iPad.