The iPhone is over 3 times more expensive than the iPod touch, how much more margin is Apple doing on the iPhone?

Besides small differences like a minor camera, fundamentally the difference between the iPhone the iPod touch is the GSM/CDMA antenna and I guess more battery to support the antenna.

Yet the iPhone costs $650 and the iPod touch $200 which is quite surprising to me.

Is it because Apple has a bigger margin on the iPhone or are the components of the iPhone really that much more expensive?

edit: my question is not about the concept of demand and offer. To make it more explicit I'll change the question to how much more margin is Apple doing on the iPhone than on the iPod touch? Original Title: "Why is the iPhone over 3 times more expensive than the iPod touch?"

The answer you are expecting won't satisfy you because the cost of making those devices is much less then the price they sell them for...

But in order to answer your question, I've made a table. Unfortunately, I didn't find any records of the iPod touch 16GB and 32GB, but I expect they are quite alike.

I'm sure Apple does get his share on the sold subsidized iPhones too.

Here is an interesting article about the difference in production costs between an iPod touch and an iPhone.
And if you want to know what an iPhone costs in detail (every part), take a look at this overview.

So, although it seems like Apple is making an awe full lot of money on these devices, Apple invested billions and billions of dollars in R&D, design, production, marketing, distribution, stores, packaging,...
So in the end Apple is still taking a lot of profit on these devices, but not as much as you might think. In my opinion, they get paid for their hard work.

To answer your question why the iPhone costs more then the iPod touch, I think it's because, as you've pointed out, the design is quite similar so most of the costs of the iPod touch mentioned above (R&D, design,...) are already recouped with the iPhone, since the iPhone was released before the iPod touch. 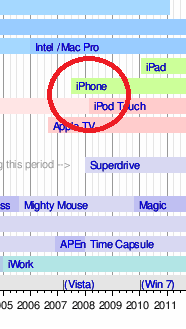 The premise that components are the primary cost to bring a product to market doesn't hold much water for any iOS device.

The most astute quip I have seen was by Horace Dediu on twitter as @asymco:

I wouldn't confuse the initial price point or ongoing price point with the incremental cost to manufacture and sell a mass market product several years after release. The iPhone 3GS is still for sale and clearly it doesn't cost as much to make now as it did on the day it was released. It's also clear that each device released at the $650 retail price point doesn't really cost that to make. Retail pricing is more of a calculated gamble that the market will bear that price. Only months to years later can the margins be measured.

I think the cart is a bit before the horse as I read your question. Also, I wouldn't say the difference between 3GS to 4 to 4S rear camera is small. The iPod touch rear camera is measurably worse than all of the above so I'm not sure how to address that other than offereing a different opinion.

The price for an object is the highest that the market will bear.

According to iSuppli (as reported in the link by Reuters), there are $188 in parts in the iPhone 4S.

Adding in the other costs, Horace Dediu over at Asymco suggests that Apple's operating margin on each iPhone is $319. He explains where he gets each number from.

iPod Touch margins, however, are much harder to track down. iSuppli has done a teardown of the components, but the costs are behind a paywall.

You'd take the iPhone component cost and, roughly, subtract out the amount for a cheaper display and less battery, a much worse camera, the cellular radios and antenna, the proximity sensor, the LED flash, the difference between a Bluetooth 4 chips and a Bluetooth 2.1 chip, and some additional circuitry for things like Airplay. However, how much those cost is, as far as I can tell, unknown outside of that paywall.

Not the answer you're looking for? Browse other questions tagged iphone ios ipod-touch hardware .

0
How can I turn an iPod touch into a functional mobile telephone?

10
How much RAM does the 4th Gen iPod Touch have?
8
iPhone data connection types
2
iOS 5 for iPhone secretly contains iPad calendar features?
0
How can I turn an iPod touch into a functional mobile telephone?
6
Is it possible to use a Verizon CDMA iPhone 4 with any other carrier or Pay-Per-Use carrier?
0
Apple Ipod Touch and Iphone
0
iPhone 4S CDMA updating and activating
0
Is an iPod Touch 5th generation a good testing device for iOS (react-native) development in 2018