I’m fairly new to Automator, in that I’ve used it only once before. What I’m trying to do is clean up a bunch of Android app assets, which are named like so:

What I want to do is remove the leading digits + underscore, i.e. any leading non alphabetical characters. I imagine this can be done either by having a script that’s smart enough remove them, perhaps by some manner of regex, or by having a prompt that asks me how many characters I want to remove, if Automator even supports that.

Secondly, I’d like to add a prefix to the files, like tile_ or ab_. Again, if I could select some files in Finder, and choose ‘Add Prefix’ or something, and enter some text into a prompt, that’d be optimal.

There is no need for dedicated file renaming software to do such relatively simple batch renaming operations – Automator will allow you to create services that do what you want.

Your first task (removing a numerical prefix followed by an underscore form file names) can be solved like this:

– you will now have a “Remove Prefix” in the Service menu of Finder (and the context menu of files and folders) which will rename files so a numerical prefix followed by an underscore is stripped from the file name.

The second task (prefixing the files with a selectable string) is even easier to achieve, using a Standard Automator action:

– when you run the service on one or more files, you will see the following dialog: 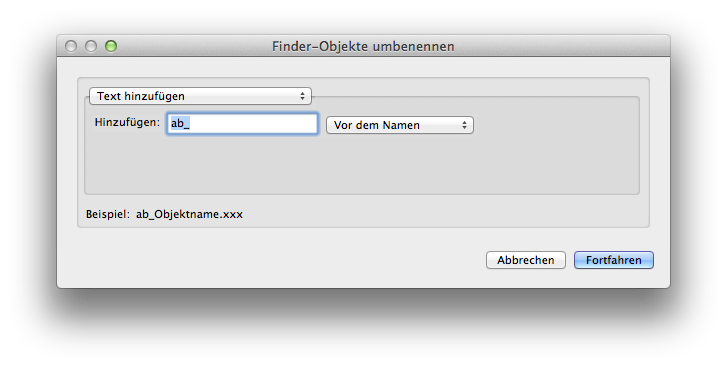 (or rather, its equivalent in your system language), where you can edit the prefix you want to use before applying it.

I've always found the commercial app A Better Finder Rename a time-saver when trying to work out complex actions like this.

Last year I had a humongous set of PDF files (>25k individual files!) which needed their filenames changed from FirstName,LastName.pdf to LastName_FirstName.pdf. Although this is a relatively simple filename mod, ABFR has far more advanced features which will allow you to do what you need.

What made the job even easier was the very cool mechanism whereby ABFR can create a droplet from your renaming specifications. Drop a folder or file on the droplet - ABFR processes the files in a flash.

(Disclosure: I'm a very satisfied customer of this software, and have no financial interest in ABFR.)

Not the answer you're looking for? Browse other questions tagged lion finder automator .