How do you get a program to load earlier when you log in to Mac OS X?

I'm running Mac OS X Lion 10.7.4 on a late 2011 MBP. I use a Logitech mouse with it, and rely on the Logitech Control Center software to configure the mouse speed/acceleration (I prefer it over the Mac OS X mouse acceleration).

The problem is that every time I boot up and log in, the mouse pointer will be extremely slow for about a minute, because it takes a minute before Mac OS X loads the Logitech Control Center. Is there any way to get Mac OS X to load it earlier?

EDIT in response to gentmatt's answer:

You are right, when I uncheck the "Reopen all windows when logging back in" box, then the Logitech Control Center loads almost immediately when I log in.

However, when I check that box, it doesn't take the Mac a whole minute to reload all my windows. For example, I just tried it with 6 Firefox windows open and Activity Monitor open. When I logged back in, all 6 Firefox windows and the Activity Monitor finished loading in no more than 10 seconds, however the Logitech Control Center still took about 1 full minute before it loaded. I was watching the processes in the Activity Monitor, and during that minute there was no activity at all while I waited for the Logitech Control Center to load, and then all of a sudden 7 different processes loaded at the same time (backgroundinstruments, warmd_agent, imagent, AirPort Base Station Agent, Logitech Control Center Daemon, EpsonLowInkReminderAgent, and iTunes Helper). Why would those processes take a minute before they loaded, when the Firefox windows and Activity Monitor finished loading after just 10 seconds?

The only way I can think of is to add the Logitech Control Center app in the list of app which launched at startup. 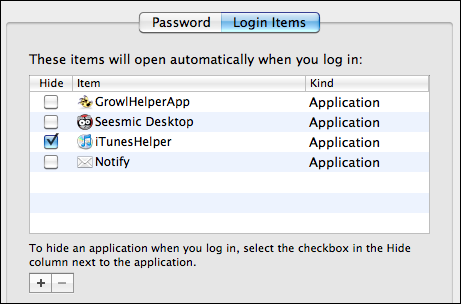 But considering the fact it takes your Mac about a minute to load this app, I'm guessing the app is already in the list.

The fact that you have to wait a minute or so means your Mac is still booting (and loading all the software). I can't think of a way to increase this speed beside adding a faster drive or adding more RAM. But that's quite radical (and expensive) just to make your boot process a tiny bit faster.

An other thing you can do to speed up the boot process is to limit the apps your Mac has to open automatically (so it will get to the Logitech Control Center faster) and to clear your desktop (so you Mac don't have to waste time and RAM by loading all these icons and shortcuts).
This and more tips, are listed in this (rather old) article.

I assume that you check the "reopen all windows upon next login" window when you shut down. I have had the same problem.

The workaround is to disable reopen on login. Then the login items will be loaded much faster. I'm not sure if this is a bug and if Apple is working on it. But I'm sure that this is in fact your problem if you rely on a 3rd-party-app to use your mouse properly.

However, you should also check the settings in System Preferences → Mouse → Tracking Speed.

Something you may consider is loading all your login items with an AppleScript as such:

Etc. To save this as an application, in the save dialog, select "Application" for "File Format:" 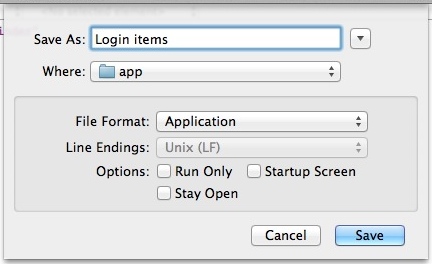 To open the application on login, just add it like you would add any other application.

Not the answer you're looking for? Browse other questions tagged macos mac .

3
Why does it take so long to load the login items with "reopen when logging back in" enabled?

9
How can I increase the mouse sensitivity of Magic Mouse?
1
How can I keep restore for apps in Lion without having session restore when I log in?
7
How to get VMware Fusion on Mac to use Logitech extra back/forward mouse buttons in Windows VM?
3
Why does it take so long to load the login items with "reopen when logging back in" enabled?
0
Determine what's using the 'system' cpu in OS X Mavericks
0
Mac OS stops for a minute
44
Logitech mouse scrolling weird after Sierra update; soggy inertia effect in native apps, choppy in third-party apps
0
MacOs Catalina doesn't fully boot until you log in