How can I fix my GPT?

I just migrated from a 120 GB SSD drive to a 600 GB SSD drive. As I was lazy and didn't want to reinstall Mac OS X (Lion), I chose the following migration path:

Then I installed the 600 GB SSD back in my Macbook Pro and started up the system. Everything works fine, with the exception that it seems to take forever for the computer to decide what partition to boot from - before the early password prompt (I use full disk encryption) I now have to stare at a white screen for about 10 seconds.

Disk Utility reports that something is wrong with the partition table that might cause trouble when booting the system: 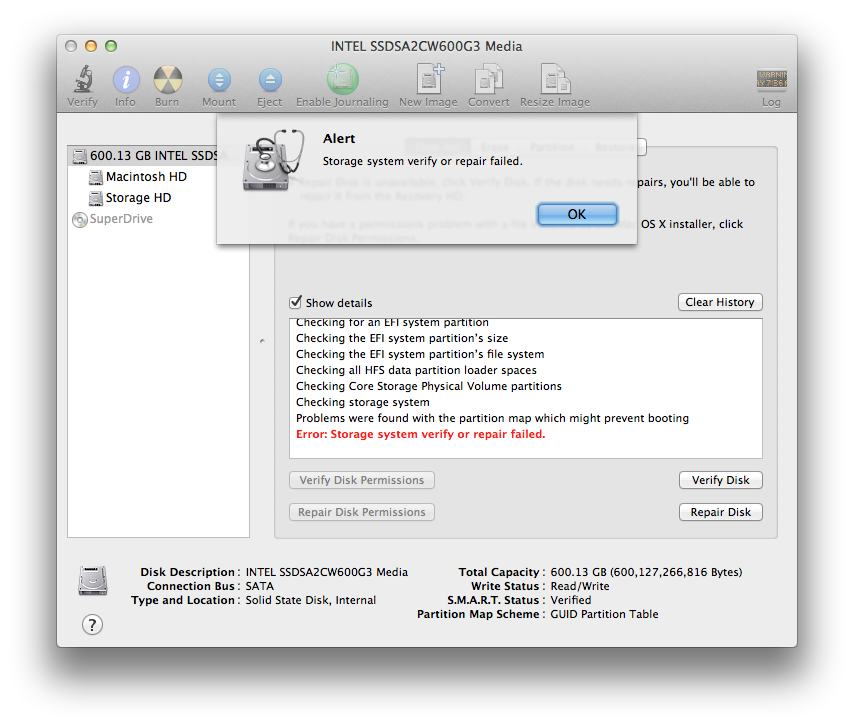 Now, fortunately, up to now they only delay booting, but don't prevent it ;) Don't be confused by the screenshot, in the meantime I created another partition holding a filesystem labelled "Storage HD".

What did I miss? Is there a boot flag or something like that for a GPT partition that I didn't set? Disk Utility is unable to "repair" anything. Also, when I boot with a Lion Installation Media and use Disk Utility from there, it doesn't report any error at all.

I am aware of the recovery from TimeMachine / old disk / etc options of the Mac OS X Installer. I'm not interested in alternative ways to migrate a Mac OS X installation, but want to understand what exactly is going on here.

A PRAM / NVRAM reset (⌘-⌥-P-R on startup) fixed the delay. The Disk Utility error report remains. Started again from my old drive, the error is reported there as well... probably it was there before the migration.

Not the answer you're looking for? Browse other questions tagged macos boot partition .

5
Resetting MBR on iMac
0
How to fix non-bootable OS X, after Boot Camp problems?
3
macOS filesystem corrupted after spliting disk in Windows. How to fix?
4
How to convert a drive from the GPT format to the hybrid GPT/MBR format when using High Sierra (macOS 10.13.2)
0
How to fix Windows Boot Camp after Linux install/
0
Macintosh HD is not visible on boot but is can be detected using Recovery on an installation USB