I have a a MacBook Air that works fine except popping up a shutdown dialog if left untouched for a couple of seconds (seems to be a consistent duration around 3 seconds or so). Hitting Cancel or Esc prevents the shutdown.

If I keep fidgeting around with the keyboard or trackpad, there's no shutdown attempt. I can even place something on the Fn key to keep the OS from shutting down.

It seems like some inactivity timeout etc. gone awry.

When taken to the Genius Bar for initial assessment, the guy there said it was probably the power button needing a replacement. But, I don't think this is the case, as the power button is functioning normally: I can still press it to explicitly initiate a sleep/shutdown.

There's a chance this was triggered by water damage. There was a recent water spill incident to which I acted quickly by turning off the machine + turning it upside down + not using it for a long while + keeping it in a box with rice to absorb any leftover humidity. But even if this is a water damage, I can't imagine a damage that manifests itself with this very narrow malfunction of wanting to shutdown on a short period of in activity. Absolutely nothing else seems to be wrong with the machine.

Any pointers? Any things I can try to fix or workaround the problem?

I have the same issue with my Macbook Air after a very small amount of coffee hit the keyboard. Apple store wanted to gut for $800+. It was less then a year old and I was dropping another $800 into it. What has worked for me for the last 6 months, I pressed the eject button down and wedged a toothpick to hold it down, than cut off the excess. Everything works perfectly and since I don't use a external drive that key was unused. I also found it was the only key that didn't interfere with other functions. I would love to find a programmer who could write a script that when the key is pressed once it's on and pressed again it's off. That would be the perfect fix without spending hundreds of dollars. Any script writers??? :)

I experienced the same problem. Power-down window pops up every 10 seconds. You don't pay attention for a second, machine turns down and your work vanishes. I tried to find a way to block the power-button. Not the easiest to find. I almost gave up on it. Then I found this app. It seems to work for me.

I will probably try to replace the topcase & keyboard later when I get a chance.

Apple just released a new update a couple of days ago, its supposed to resolve issues where your MBA randomly restarts. The update affects the SMC firmware. http://support.apple.com/kb/DL1627 Everybody who's facing the same problem should install the update and give the solution a try.

Sadly the firmware update didn't work for me and now I'm stuck with my own workaround, have a look at the attached picture...

I forced the eject button to be pressed down all the time with a matchstick.

Do you guys think replacing the keyboard would resolve the issue? I'm actually thinking about doing it...!

Mine was doing the exact same thing after water damage recently. I was worried it was the logic board but I replaced the keyboard today for $30 and it stopped prompting to restart! Was much cheaper to fix than replacing the logic board. I guess it must have been some corrosion with the power button.

I started having the same problem tonight. Would not have thought to connect it to water but I did spill a few drops on the keyboard (very small; I didn't even think anything of it), and it was immediately after that this started happening.

Also, when my iPhone went for a swim in a bathtub a few months ago, something similar happened. First, it would not turn off (bad news for drowned electronics). But then after being left for a few days in a warm place in a bag of rice and dessicants, it miraculously still worked... Except the "power off" slide-dialogue would show up frequently at random. (Eventually it stopped.) So I think this definitely has something to do with water.

I'm somewhat convinced this is a software issue, and not a hardware issue. I have exactly this problem too.

The reason I say "software" is that so many people are experiencing the same symptoms, whereas water damage may affect other keys, not specifically shutdown.

I have a macbook air that I almost never update, because I have a stable system and use it for private developments, so I'm very careful about what gets installed, and nothing to my knowledge gets installed without my agreeing to it.

However, Apple have been sneaky installing things when I haven't asked for them.

For example I am running 10.6.8 since I bought the machine. I don't have java or flash, so I don't need to worry about those "issues". But about July this year I started receiving pop-ups suggesting that I upgrade to Yosemite. Bizarre. I haven't been prompted to update to any of the other versions in between, so this comes out of the blue. That can only happen when something has been loaded to my machine, to check the version and issue the message. Is apple playing dirty?

The fact that the FN key can stop this, and the fact that the pop-up re appears after 4 seconds of inactivity (no pad touch, no key press) also indicates that a time is set off, and that there is some monitoring.

I can't be sure, but I absolutely don't think this is hardware.

EDIT I am now 100% sure this is software based. Last night I ran the hardware check, which requires restarting holding down the D key. The hardware check ran for more than an hour and found nothing, but the important thing is that the machine did not power down at any point. I didn't have any keys held down or any such tricks, and nothing happened.

In addition I carried out a timing check. This is not an intermittent problem, it is triggered just after 4 seconds of inactivity. So you can use anything to prevent it from happening, touching the pad, holding any key down, moving a mouse, etc... but as soon as 4 seconds of inactivity has passed the message returns. This is therefore a programmatic thing. Some code has been changed somewhere that waits for inactivity, and then triggers this.

My 2012 11" Air developed the same problem today after a miniscule drop of water splashed onto the spacebar from watching my kids at swimming lessons. Although I was well back from the pool - a small drop did reach the keyboard - I quickly cleaned it off in seconds - but the problem immediately developed.

Solution - I simply have gently wedged the function key down and this prevents the shutdown message completely.

I'm not going to waste time going to Apple to fix it. I only use this machine for client meetings in any case. And not so much for hard work.

Note that it also doesn't come up while doing a lot of typing like I'm doing now.

I finally took the device to the Apple store for repairs. Once they opened it, they noticed that there was extensive water damage. The cost of the repairs would be more than half the price of a new MacBook Air, so we decided to not go ahead with it. It's still fully functional except for this shutdown issue.

Machine would shutdown 2 mins into boot safe mode better but still shutdown. I have taped the shift key down and it is allowing me to reinstall OS X 35 mins in.

If the keyboard is replaced im guessing everything will be fine.

Yes a piece of grey duct tape on the shift key is a workaround.

I guys. MB MIDDLE 2010 8GB RAM 128Gb SSD. I've got the same issue. Power window pop-up and the shutdown. I now have a new hard drive and RAM (i thought it could something with this parts). I performed a clean install of OSX Yosemite. After that i did a dowgrade to OSX Mavericks, still no good... And as @T9b i did a hardware test overnight & day and it worked fine and without crashes or errors of any kind! I'm now with toothpick... anyone found a resolution?

I had a similar problem described on another duplicate question. Following @Steve's advice on holding the eject button, I used a paper clip to do so, fortunately I didn't experience any sudden shutdown so far :) 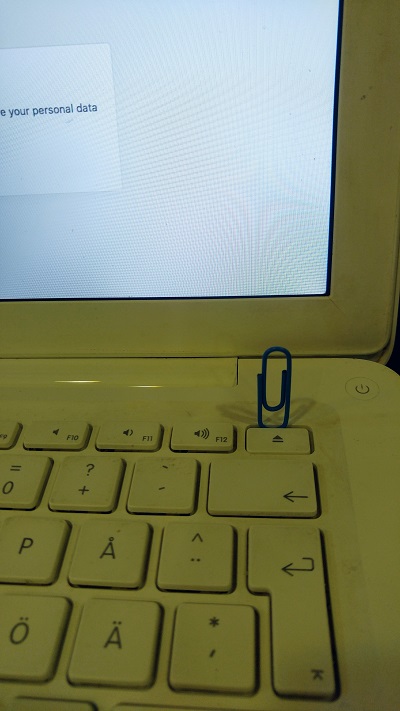 I just want to let everyone know that this link worked for me. I've Macbook air (mid 2011). I had dropped liquid over my mac. even when i cleaned it, it burnt my keyboard part etc. Anyway, I paid $300 (in budapest) and get it done. However, after 2 weeks i got this problem. My mac was consistently asking me to shutdown. Note that this time i have not dropped any liquid. Anyway, when the message to shutdown came the only thing i could do was to cancel it but it was coming after every 10 secs.

Anyway, I came to this page and saw this link for PowerBlock third item down http://www.irradiatedsoftware.com/labs/

i have ran it. It's been 30 minutes after running this link and my mac has not asked me about shutting down. i presume that it has already solved the problem. Note that previously i was unable to run my mac even for 5 mins without getting this message.

Not the answer you're looking for? Browse other questions tagged macbook-pro shutdown .

0
Are you sure you want to shut down your computer now?
5
My Mac prompts to shut down randomly
3
Macbook Pro randomly shutting down with inactivity