Also I then discovered a program for Mac which allows you to AirPlay to a Mac, increasing the AirPlay functionality vastly. And tryed pressing the button when I had that working, it still did nothing. (though the Mac program works as I can send youtube videos and photos to it) And in the photos app, opening the multitasking bar and pressing the AirPlay button does nothing. So what is it there for anyway?

It's not just for AirPlay. It's general-purpose media redirection. You can use it to switch between the built-in earpiece, the speaker on the bottom, Bluetooth earpiece, etc when on a phone call. For example, I placed a call then went over to the audio controls in the multitasking bar. 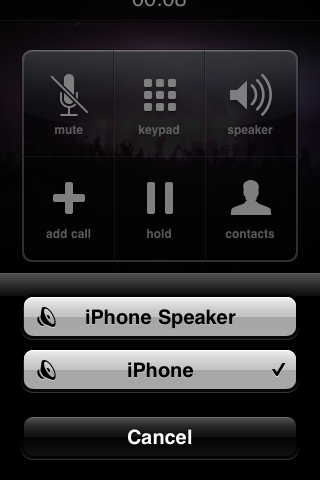 It just so happens that the primary use is for AirPlay and media playback.

Not the answer you're looking for? Browse other questions tagged iphone mac airplay .

0
iPhone plays podcasts in seemingly random order
0
Embedded YouTube videos on mobile Safari - has something changed?
4
iPhone 4s volume bar disappearing
1
Will performance on my AirPort Extreme be hurt pushing AirPlay content over 2.4Ghz and the rest on 5Ghz?
2
Apple Watch stuck on Airplay
0
Where is the AirPlay menu bar app?
0
Answer a phone call from iPhone screen with airpods in without disconnection from airpods
4
Blutooth stopped connecting to car automatically
2
How to stream audio to multiple AirPlay devices