How can I automate keeping historical versions of iOS apps on the Mac?

I find that iTunes management of backing up Apps isn't ideal for a number of reasons. It will happily keep a copy of the most recent App in it's own area within the iTunes library, but it's archival process is very much against your "current" applications, without necessarily keeping a history of previous versions.

There are various reasons for keeping previous versions of an App, from being able to simply revert when a new version is buggy or makes changes which you do not wish to use, to the App changing it's minimum requirements to need hardware which you just down own therefore making the App unusable.

My current manner of archiving old iOS applications is both manual and therefore dysfunctional.

Currently I move copies by hand to a folder named "old iOS applications". I also depend on Time Machine to provide historical copies of apps for the rare case when an update to an app causes me to have a problem with functionality of an app. I prefer to keep iTunes only managing apps that are actively installed by deleting things I don't use regularly and letting the next iOS sync transfer back just the apps that are currently in use. The downside of a lean iTunes library is that finding an old app is hit or miss - needing to recall when it was saved to Time Machine. This hesitation also acts as a deterrent to keeping iTunes lean since I don't have a good process for archiving these programs.

What are people doing to have all copies of iOS apps organized without depending on Time Machine exclusively? I'm looking for an automated process for archiving apps delivered from the iOS app store.

Indeed, iTunes will simply throw in the Trash any item that is replaced by a subsequent update, which is a handy getout clause if you notice that you need the old version back quickly, before you empty it, but isn't exactly a robust solution with long term options.

Using Time Machine is a simple way of checking back through your history, and should be very effective on the understanding that you are using it regularly and to the normal hourly schedule, but may people don't have it setup, or use an external disk that is often not connected for long periods of time (guilty as charged).

So, they key is to get ahead of iTunes, and create your own archive of Apps, and you can break this down into 2 simple steps, the first being noticing when an app has changed, the 2nd being to do something about it.

You can happily write a script that you schedule to check for changes to select files and folders, but this is inefficient when you can simply use built in OS features such as Folder Actions, which are a much neglected yet insanely useful and powerful set of tools.

The script that you apply to a folder action can be anything you like, and the simplest way is to create something within Automator, which allows you to string together various application specific functions with bits of AppleScript or even Shell scripts to achieve the end result, in our case taking a copy of updated apps and archiving them off. 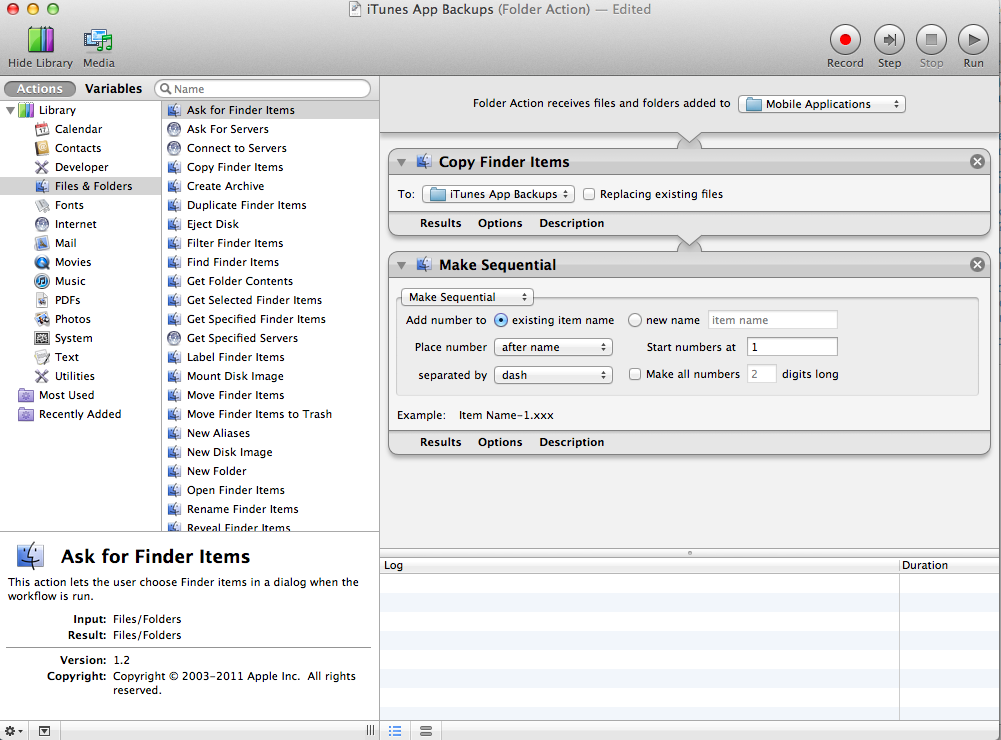 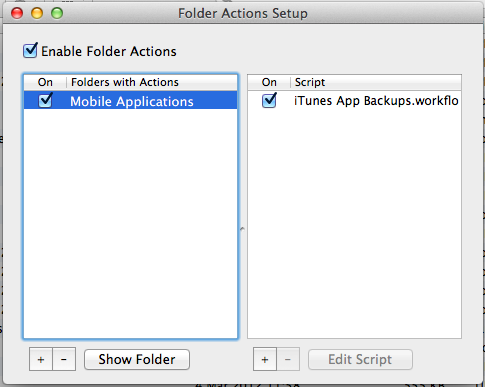 Note, that you can amend or expand this workflow to do all sorts of clever things, from keeping a set number of versions, removing any files older than X months at the same time etc etc, and if named sensibly you can apply the same workflow to multiple folders, thus creating your own personalised archiving mechanism for things other than just Apps for example. Also, note that if you subsequently replace an upgraded app with one of your own backups, it will get backed up again, which is something you might like to be aware of for such files that retain the same filename and are only distinguishable by their timestamps.

Note that a lot of the ideas in the post were inspired by a Macworld Article, which introduces the same process but in less detail

Not the answer you're looking for? Browse other questions tagged macos itunes backup ios-appstore .

6
How can I keep different app versions on two devices synced with iTunes
5
Can iOS apps be safely deleted from iTunes?
7
Finding old versions of iOS apps (for 5.1.1 on a 1st Generation iPad)
3
How to prevent iTunes from trashing older versions of apps on updates?
1
How to delete all iOS Mobile Applications in iTunes except ones being used?
9
Is there a limit to how old a device/iOS version iTunes can backup?
1
How to gift an app on the App Store for iOS?
2
Can I buy iOS apps on a computer, and then gift them to the end user?
0
Apps in iOS App Store, download old version of the app to support old iOS