How to do a screen capture from iPad 3?

I need to record me using an iPad while I am drawing on it (with Penultimate). I usually use ScreenFlow to record onscreen actions on my desktop Mac, so I need a way to display iPad on my Mac. Is there a way to do screen sharing? Or, I suppose I could do a screen capture right from my iPad. Any suggestions? Thanks,

UPDATE: One solution for 10.7.3 and iPad 3 is Reflection + ScreenFlow, no cords:

Tricky one, but you can rig up a solution - I'm not sure about the final quality though.

First, you need to allow your iPad to use AirPlay Mirroring with your iMac as the target device.

To do this, you need to use a program like AirServer ($15 for a single user license) or Reflector ($15 again, but has a trial at least) or AirMac (Free, but not as fully featured) or AirPlayer (Similarly beta). Mountain Lion will have this feature built in, potentially.

When this installed, check you can get it to work - so ensure the iPad and iMac are on the same wireless network, and turn on Airplay Mirroring, pointing it at the correct host: 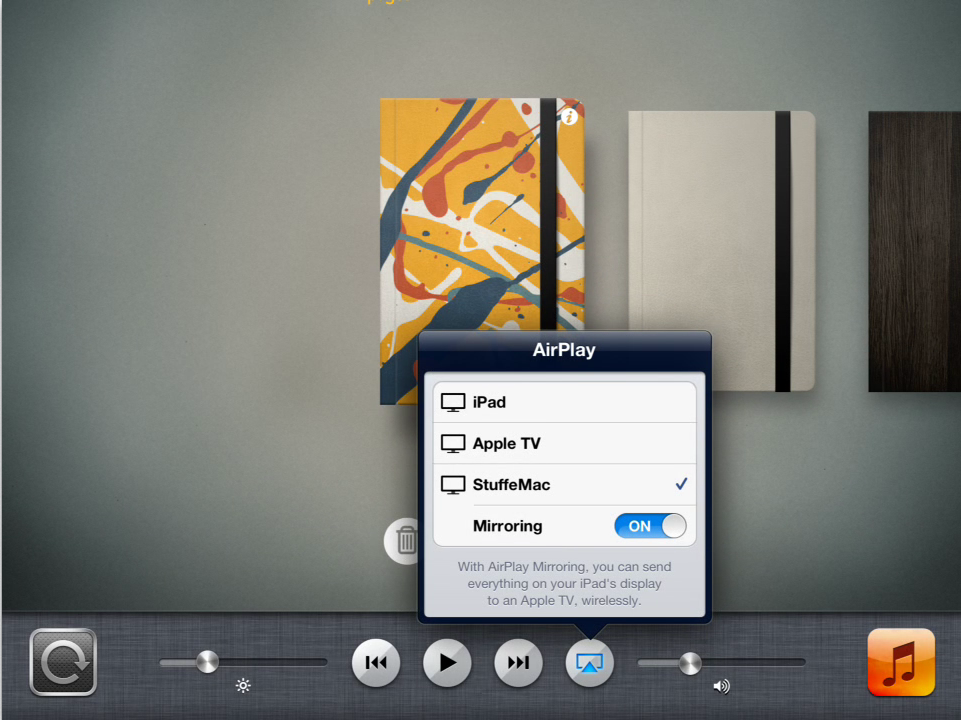 You should get a window displaying the contents on your Mac. Note, than even if you are using the top of the line iMac, the resolution of the iPad will still be too large to view without scaling, so expect some downscaling, either by the airplay protocol or the receiving app anyway, simply to ensure it fits on your screen. Given a choice, a neat halving to get the original 1024x768 resolution should suffice. The method of doing this will be different depending on which app you end up using.

Once you have a window running with out iPad screen in it, you can capture it with Quicktime. I note that you already use ScreenFlow (which I missed at first), so you can do this your own way, but for everyone else you can do it with build in tools like Quicktime. I am going to assume you are on Lion. Open up Quicktime Player, and go File > New Screen Recording Hit the big red recording button, and you get the message Click to record the full screen. Drag to record part of the screen Drag a neat square over your Airplay receiving window, adjusting as required to get a neat fit, then hit the record button in the middle, and do your stuff.

CAVEAT: Lots of things can affect quality using this method. Your wireless network may be slow, resulting in dropped frames or lag when recording. Your computer may be slow, or busy, resulting in dropped frames etc etc etc. Quicktime (if you use it) is already by definition recording a compressed video, not raw, and it's using an image source on your screen that is already displaying a video that has been compressed down from Retina resolution to something saner for desktop use. This method works, but the resulting video quality can vary wildly depending on your setup. You can mitigate to an extent with thoughtful configuration of your network and so on, or by using more expensive screen capture solutions that record raw etc, that but is up to you to decide how much quality you need. As it stands, the test video I put up was more than sufficient to be perfectly pleasant on YouTube.

Now, time to own up, I cannot get it to work with the free versions on offer, but I have in the past, so I'm throwing the solution up anyway, in case it's just me being stupid.

I have used the trial version (limited to 10 minutes) of Reflector though, and created the following video as an example, proving it can be done, but you may need to cough up for paid software to do so:

EDIT: Since this answer was accepted, many of the software solutions listed have included screen recording directly within the airdisplay software, negating the need to arrange a separate quicktime screen recording, and potentially improving quality.

I've linked to the Apple versions of the video out adaptors, but there are also third-party versions available, often at a lower cost.

Apple sells a composite video out cable that fits into the iPad dock but, unfortunately, video mirroring doesn't support composite output. If you want to use a composite capture device for the Mac, for example, the Elgato Video Capture , you'll need to use the Digital Video (HDMI) adaptor and an external device to convert that signal to composite video. You can also do the same from a VGA output using a different converter. Again, these products are linked for reference only, I'm not endorsing hardware or source.

If you can live with lower resolution, Steven Sande outlined a budget solution for getting analog video into a Mac in TUAW's iPad 2 video mirroring to Mac, the cheap and dirty way

Personally I would use a hardware solution or the AirServer workflow and avoid the security and functionality risks inherent to a jailbreak, but that's a personal preference. If you do decide to go the jailbreak route, be certain to educate yourself as to the risks as well as the benefits and make your choice accordingly.

If you've jailbroken your iPad (which you'll be able to do within a few weeks), there is Display Recorder ($1.99).

Another way to do it, is explained in this MacMost podcast. But it involves a huge setup (including a HDMI cable and extra software on your Mac), so I would wait for the jailbreak :)

A late answer, but pertinent. As of iOS8, simply attaching your iOS device to a Mac with the lightning Cable (not sure if this works with devices that support iOS8 but stil use the 30 pin dock connector, e.g. iPhone 4S, iPad 3) allows the display to be used as a camera input in Quicktime. Simply connect, go to New Movie Recording, and then choose your device from the drop down list of sources. It can also attach a voice track at the same time.

This method has the advantage over the others of quality, and price. It's higher resolution, better bitrate, and free. Also, it totally replaces your status bar, thus hiding the bright blue "I'm using AirPlay Mirroring" highlights, removing your cell carrier details, and showing the time as 9:41 with permanent 100% battery - just like Apple demos.

Not the answer you're looking for? Browse other questions tagged ipad screen-capture screen-sharing .

4
iPad: export Keynote project to video
2
How can I display my ipad screen on my PC?
0
How can I see my iPad from my MacBook?

7
Using screencapture when remotely logged in to a headless mac via ssh
1
Screen capture software that streams to Apple TV?
6
iOS Screen recording
3
What methods are there for making a screencast from an iPad 2 or 3 with iOS 5?
8
How to Screen Sharing / VNC to an iMac without waking the display?
0
How to screen record higher than 1920x1080
1
Mirror iPad Pro to MacBook Air
1
"Whiteboard" and screen recording apps
8
Demonstrating iPad's screen on MacBook
1
Sidecar to turn iPad into a Wacom style tablet (i.e. Pen Tablet)?