I have two windows open (so far I think this has only happened when at least one of the windows is a Finder window, though I'm not sure if that fact is essential to the problem), and I click the one in the background. The previously-focused window changes shade to show that it has lost focus and the now-in-focus window also changes shade to show that it has gained focus, but no matter how many times I click it, it doesn't come to the foreground. I have to try cycling between the windows in order to successfully move-to-background the out-of-focus window and move-to-foreground the in-focus one. Why would this happen? I've never seen such behavior in older versions of OS X and don't think it's a Lion "feature" either. 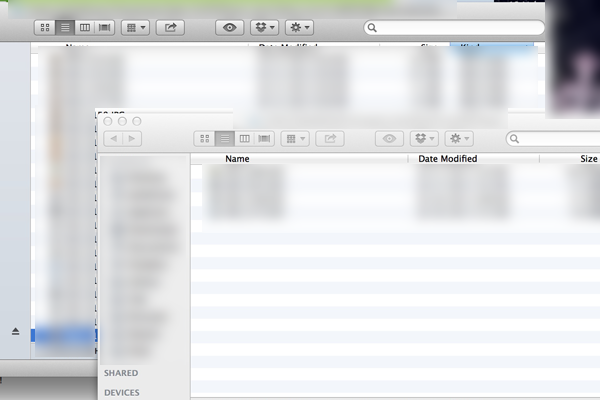 I've noticed this in versions of OS X as far back as Panther. It seems to happen more often with apps that use heavily tweaked windows (like Microsoft Office, Adobe apps, or Java apps, particularly Eclipse).

It's just a bug in the app. File a report with the vendor if you want and maybe they'll be able to fix it.

Not the answer you're looking for? Browse other questions tagged macos finder window-manager .

19
OSX cmd+tab behavior with multiple windows & monitors
0
XtraFinder makes Finder windows not all restore
4
Move focus to another display with keyboard
3
Force windows to be maximized but not fullscreen?
3
AppleScript: How to create a new Finder window for a folder that is already open?
4
Finder window reappears if still open
1
Tile *Previous* Window Side-by-Side with Current