Why does iPhoto need to "repair inconsistencies" in my libraries after every time I quit and open it?

Every time I open iPhoto '11 (version 9.2.3, latest version), it displays a dialog box that asks me to repair inconsistencies in my iPhoto library. After I click Repair, it takes 5 minutes to finish and after closing iPhoto and re-opening it, it displays the same message. I've re-installed iPhoto from the Mac App Store already and I can't see why iPhoto is doing this. It's a hassle to have to repair the library after every time it opens, and even when I cancel the repair, it works fine. Is there any way I can fix this?

Also, Photo Stream is acting up. When I go under the Photo Stream tab (which has been working fine until now), it says I am signed in. After clicking "Turn on Photo Stream," it displays a dialog box asking me to authorize iPhoto to access the Keychain. "Always allow"-ing it only makes it appear again and this continues from 10 to 15 times. When they finally disappear, Photo Stream simply doesn't do anything at all, and stays at the page explaining Photo Stream and the buttons to enable it.

As if all of that wasn't enough, after exporting two photos from Photo Booth, iPhoto insists on trying to import an already-imported picture EACH time the window is inactive (when I click on something other than iPhoto, e.g. Safari or Finder) and asks me to resolve duplicates. As a result, each time I switch windows from iPhoto to something else and back, I have to put up with iPhoto importing two photos and asking me to resolve duplicates.

Why are there so many problems with iPhoto? Is anyone else experiencing the same issues?

First, backup your iPhoto Library then quite iPhoto. Then, hold down option + command while starting up iPhoto. You should then get a prompt like this: 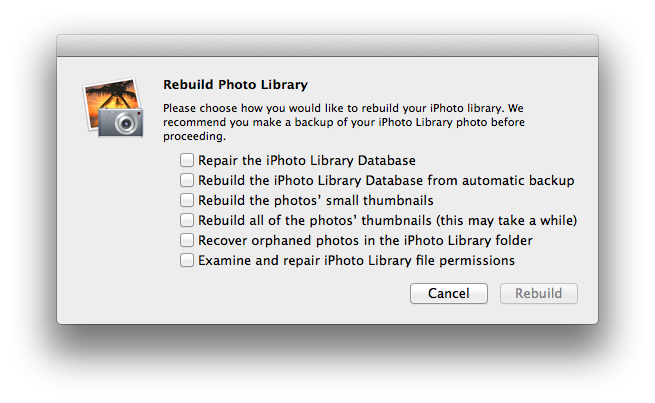 Try selecting all of the options if you have time (it takes a while to repair) or just the last option "Examine and repair iPhoto Library file permissions if you only have a little bit of time on your hands. Rebuilding your Library should solve the problem, but make sure to have a backup just in case something goes wrong.

For more reading, try this link here. Hope this helps!

I don't know, I gave up on iPhoto a long time ago. But it sounds like you are using Lion; you might want to try repairing your user permissions. That can fix a lot of these sorts of problems. Also use Disk Utility to repair permissions on your disks, but that's less like to help here.

Thank you everyone for your answers, but it seems that I needed a third-party app called "iPhoto Library Manager" to duplicate the entire library and delete the old one. Everything seems to be working fine now, so thanks again!

Not the answer you're looking for? Browse other questions tagged photos.app mac-appstore keychain photo-stream dialog .

9
What is the correct way to use an iPhone and iPhoto and PhotoStream?
3
Understanding Photo Stream
5
Automatically delete photo from Photo Stream when deleted in iPhoto or Aperture
7
Does iPhoto need to be open in order to download Photo Stream photos?
1
Photostream/Photo import duplicates
0
Why won’t iPhoto open my iPhoto Library any more?
4
Importing a shared photo stream into iPhoto creates duplicate photos
6
Can I clear my iPhone camera roll without losing any photo?
0
Moving iPhoto and iMovie libraries