I recently replaced my broken SuperDrive with an OCZ Agility 3 120GB SSD with the following specs:

My iMac has a SATA2 bus, but after connecting the SSD it will only connect at SATA1 speeds. I knew that the SuperDrive used to use this speed, but accepted that it was because is was simply an optical drive that could not push the speeds to saturate a SATA1 controller, so why bother with anything better.

However I expected the SSD to link at the SATA2 speeds that the bus supports. 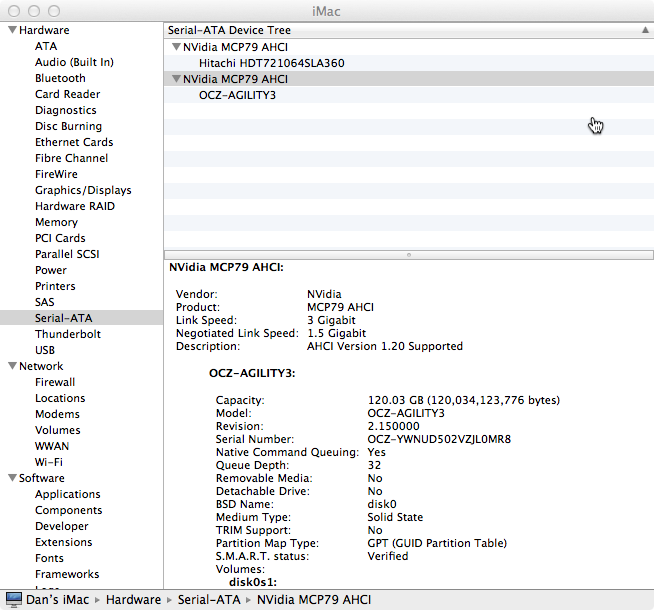 I have the latest firmware on the drive itself, and on my Mac, I have reset my PRAM, and I don't know what to do next. Why does the SSD not connect at SATA2?

I accept that I cannot get SATA3 like the drive supports, but some initial testing using a disk speed test tool suggests I am only getting just over 100Mb/s write and 145Mb/s read, which is a mere 20-80% more than the regular drive gets.

I cannot just swap the drives over, as it's not like the MacBook Pros that use 2.5" drives. I have done a lot of Googling that suggested a firmware fix for MacBook Pros solved the same issue on those machines, but no luck for my iMac.

I have just put a normal SATA2 drive into the optical caddy, and it comes up at 3Gb (SATA2) just fine. So it seems it's something about the SSD that it doesn't like. Controller? I wouldn't have thought that it cared what was connected, so long as it was SATA?

Looks like a known problem with the SSD. OCZ has a firmware on their forum that will fix the issue. See the post "Changing SATA speed on your "3" series SSD." in this thread.

This portion of the instructions only applies to OCZ "3" series SSD's - Vertex3, Agility3, and Solid3 - all sizes. Some SATAII motherboards, when used with one of the above drives will downgrade the drive to SATA1 speeds. We find this mostly on Nvidia chipset motherboards for PC and Nvidia chipset based Mac's. To resolve this, we have a tool that will set the link speed to be locked at SATAII and improve performance. This can be reversed when you update your motherboard/system so you can have the full SATAIII speed again.

Installing the firmware involves burning a Linux LiveCD so I hope you have a computer with the optical drive still in.

Sandforce drives have had many issues with Macs and should be avoided with Apple hardware. Go for non sandforce controllers like samsung, crucial, or the vertex 4

1
Some information about an extra SSD drive in MacBook Pro

0
What adapters are available for a connecting a secondary SSD to the Superdrive's SATA cable?
1
SSD adapter for optical drive
1
SSD causes freezes and beach balls
2
MacBook Pro (2012 - MD101LL/A): Superdrive to SSD swap?
2
Can SATA negotiated link speed be set lower in software?
1
SSD for Mac Book Pro 2012 optical disc drive
4
Macbook Pro 15" Late 2011 - Swap HDD with SSD - Fan always 2000 rpm
2
Will an internal optical drive from a non-Apple manufacturer be fully functional in a MBP 13" Mid 2009?
1
iMac 21.5 Core i3 mid 2010 optical bay swap SSD
2
I think my drives are in the wrong bays on my iMac