How do I get podcasts downloaded directly to my iPhone and iPad to match the ones on my Mac?

I have a podcast subscription on my Mac. For example, Marketplace. It's a daily podcast, and I often get them by downloading them to the Mac (Snow Leopard 10.6.8) with iTunes (currently 10.6.1 but has happened for a long time) and syncing to my iPhone. However, sometimes I forget, and so I download them directly to my iPhone by following the "Get More Episodes..." link in the podcast list on my iPhone 4 (iOS 5.1). 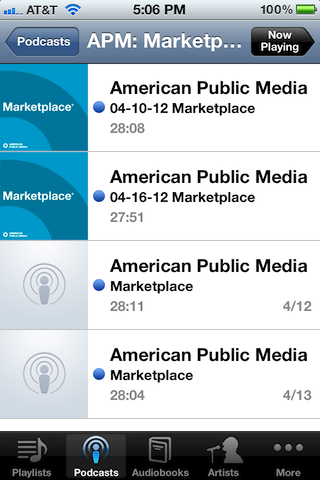 You may have noticed I did not actually wipe my iPhone and set it up as a new device. That's a huge pain, because since I would not be restoring from a backup, I would loose lots of stuff. Instead, I just rebuilt the iTunes library, which made it look like a different library, which caused iTunes to wipe and re-create my iTunes library on my iPhone. And on my iPad. And it turns out I'm having the same problem on my iPad 3. Which would seem to point the finger at either the podcast publisher or iTunes on Snow Leopard. But probably not the publisher because jsd said he did could not reproduce my problem.

More detail about the problem

Episode downloaded directly to the iPhone via App Store, on the iPhone:

Episode downloaded to Mac via iTunes then synced to iPhone, on the iPhone:

On the iPhone, it's possible for me to download a podcast episode I already have on the iPhone because I got it via syncing with the Mac.

The Mac will pick up episodes I downloaded to the phone during a sync, but it still has problems.

Episode downloaded directly to the iPhone via App Store, on the Mac view of iPhone:

Episode downloaded directly to the iPhone via App Store, synced to Mac, in Library Podcasts view

Episode downloaded to Mac via iTunes in Library Podcasts view on Mac:

I'm hoping someone out there has a better solution.

EDIT: In order to find out if this problem is specific to my iPhone or Marketplace:

You say that sometimes you "forget" to sync. Are you utilizing Wi-Fi syncing? The sync activates whenever you're on the same network and your device is plugged in. This might reduce the number of instances that you need to download a copy from your iPhone.

I realize this is a stop gap. I feel your pain. Like you, I've put a lot of effort into understanding why the leading podcast catcher can't seem to make podcasting on the iOS "just work". In the end I needed a bit of self inflicted tough-love and just admitted that this was one are that Apple fell short and that they weren't going to remedy anytime soon. They're putting their resources where the revenue streams are.

My situation forced me to change my workflow. I've been waiting for the promise an untethered world, and jumped into iCloud full steam. I use iTunes Match for my music, iCloud for my backups and no longer sync to iTunes on my computer. Of course, this means that there is no way to subscribe to podcasts on my iPhone without using a third party app.

After trying several podcast apps, I've come to like both Downcaster and Instacast. I've imported my feeds from my mac, I can subscribe to new ones on the iPhone, and I can sync to my other devices through iCloud. What I can't do is sync back to the mac. But I'm ok with that now. By using a full featured app on the iPhone, I've come to really like the experience. Given the choice today, I'd continue my new habit of listening to podcasts on my phone even while I'm working on my mac. I don't ever need iTunes open and the overall listening experience is much better.

I suspect you have somehow added two slightly different feed sources - one on the mac and one on the phone. Delete all episodes of the podcast from both places and start over with just a single subscription initiated in iTunes on the Mac.

Here's how I went about testing my idea about feed sources being the issue:

I just "subscribed" to Marketplace by manually downloading the same episode on both my phone and my Mac without having any pre-existing subscription on either.

When I synced (WiFi?), I did not end up with a duplicate episode.

Then, to try to break things, I also tried downloading an episode on the phone and syncing it to the Mac once the download completed. I am not able to reproduce the problem you describe with artwork/title mismatch.

Not the answer you're looking for? Browse other questions tagged iphone itunes podcasts ipad .

15
Podcast syncing between iTunes and iPhone doesn't work
12
Alert time discrepancies when synchronizing calendars between iOS 6 and OS X 10.8
7
Why does iTunes continually reset the play count of select songs to zero?

1
How can I download podcasts directly to my jailbroken iPhone?
8
What apps are available for subscribing to podcasts directly on the iPhone
2
Can I edit the “Release Date” field of podcasts in iTunes?
1
Can no longer download podcasts to iPhone
1
Why won't the iPad Podcasts app download my MP3s?
4
Can You Make the Podcasts App Show Only Downloaded Episodes?
15
Podcast syncing between iTunes and iPhone doesn't work
5
How to view all the downloaded podcast episodes on the iPhone?
1
What does “Add to Library” and “Remove from Library” mean in Podcasts?