Is it possible to copy paste between Mac OS and its virtual machine?

I have also installed VM Tools.

I would like to know if it is possible allow copy paste among the three systems? It seems that, by default (just by mouse) it is not permitted.

Edit1: I am using VMware Fusion 4.1.2, and the Settings for both Windows and Ubuntu is as follows: 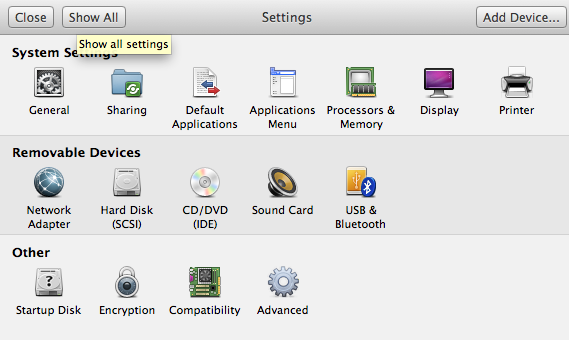 By the way, I just want to copy texts...

Edit3: I just shut down the 2 virtual machines, and rebooted them, and copying and pasting texts among them works fine... It is really odd... So I guess I had done something on my Ubuntu, which disabled copying and pasting, then rebooting Ubuntu reset it...

Yes Copy and paste is supported, but it depends on what you are doing. If you are trying to copy and paste files using a right click and copy command in the Finder, and then trying to right click and paste in a Windows VM for example that will not work since VMware does not support copying files that way. When moving files between VMs Drag and drop is the feature to use (where supported with VMWare tools, etc)in order to move files from the host computer to each guest VM and the opposite is true too.

Now if you want to copy text using the clipboard, that works between the host and each supported virtual machine with the tools installed as noted in Moving and Copying Files and Text Between Virtual Machines and Your Mac

For example select text in a Mac OS X application and copy it to clipboard (Command-C). Then go into a windows VM and put your cursor in a text area and then perform a control-v you should get what you originally copied on your Mac host.

According to other documentation for VMware Workstation

The copy and paste feature has the following restrictions:

• Copying and pasting email attachments is restricted to images or files smaller than 4MB.

•Copying and pasting plain text and formatted text (including the formatting) is restricted to amounts less than 4MB.

•Copying and pasting text is restricted to text in languages that can be represented by Unicode characters.

•Workstation uses the PNG format to encode images that are copied and pasted. Copying and pasting images is restricted to images smaller than 4MB after conversion to PNG format.

•You cannot copy and paste files between virtual machines.

•On Windows 95 and Windows 98 guests, copying and pasting is restricted to plain text in amounts less than 64KB.

The Vmware Fusion for Mac Documentation fails to mention any limitations on copy paste size limits, etc but it is same to assume the limitations are probably transferable to the Mac version of VMware as well.

You can find a lot of documentation about copy/paste, drag and drop,... on the website of VMWare, and they stated:

To use the copy and paste feature, VMware Tools must be installed on the virtual machine.

But since you've already installed those tools, I recommend you reinstall them. Just to be sure.

Also, make sure you don't stumble upon the limits of this feature:

Edit: I got here again when I couldn't get copy and paste to work between a Ubuntu VM and an OS X host. I had to reinstall VMware Tools based on the instructions at http://kb.vmware.com/selfservice/microsites/search.do?language=en_US&cmd=displayKC&externalId=1022525:

when I want to copy a file greater than 4 MB from win7-8-? to OSX VM I just share a directory and use the network (LAN).. or just use a USB flash drive.. same for text.. this goes for Linux-Opensuse, etc. also

Not the answer you're looking for? Browse other questions tagged vmware virtualization .