Just thought of a concern on the MacBook Air. Flash drives / SSDs have limited read and write capacity, right?

How do I know when I am reaching that? I don't want my data to be corrupted.

From what I understand you don't need to worry about that. Those limits are just as indication and you won't be reaching those in years (at least with newer SSDs). If I remember right, my Crucial M4's lifespan is over 5 years under heavy daily use (like 40gb write per day).

Yes, but it's a calculated value based on a number of factors including, but not limited to:

When will an SSD fail?

According to this SNIA article, hard drives see a Mean Time Between Failure (MTBF) of 1 million hours, while SSDs show 2.1 million hours. SanDisk® further rates its Lightning SAS SSDs at 2.5 million hours MTBF. Thus, SSDs have more than twice the longevity than HDDs.1

They go on to further differentiate SSDs from HDDs...

SSDs are different in how they wear in comparison to hard drives. Due to the characteristics of NAND flash, SSDs have a finite lifetime dictated by the number of write operations known as program/erase (P/E) cycles NAND flash can endure. The objective of SSD endurance numbers is to capture this consumable nature of flash storage into a quantifiable number to provide end users guidance on the anticipated lifespan for the drive in operation.

Meaning: It's a best guess number. Your SSD is not going to stop functioning when it reaches that "theoretical" limit. Chances are, you are going to outstrip the capacity of the drive with data long before you reach its wear limit; you'll buy a bigger one before it fails.

Just for grins and giggles, I used Intel's SSD Endurance Calculator to estimate the life of an SSD being used for Virtualization with a 100% duty cycle (worst case scenario). 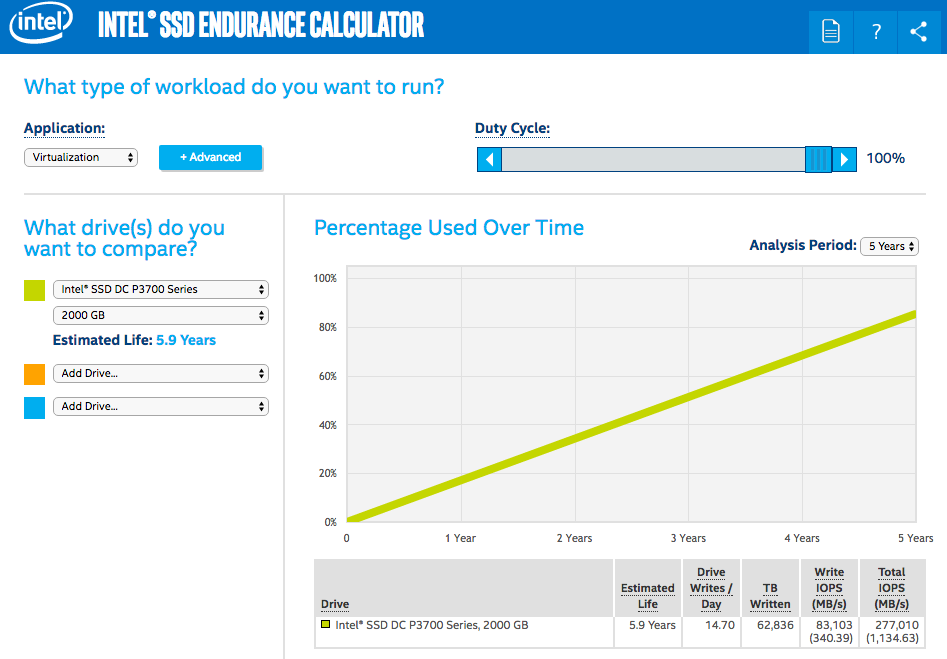 To put that into perspective2, you would need to

Yes, there's a limit, but you needn't worry about it. You simply won't be able to perform enough read/write operations before you run out of capacity.

If you're concerned about data loss, you should be doing backups

2 Lifewire: Terabytes, Gigabytes, & Petabytes: How Big are They?

Keep regular backups and don't worry about it.

6
How many writes do I have on my 250GB SSD hard drive on my Macbook Pro High Sierra
1
Solid State Drive for small commercial print shop
2
Is using the rm -P command safe on Macs with an SSD
2
Mojave Screenshots save location set to Ram drive doesn't work
1
Recovering files from SSD and SSD life?
0
Sudo rm -rf or Trashcan: Which is better for SSD health?
1
Will migrating an SSD drive to APFS prolong its life?

9
What is the benefit of using flash memory in the Macbook Air?
0
SSD and Mountain Lion
6
Can I swap the SSD from mid-2013 Macbook Air and mid-2014 Macbook Pro?
3
Performance of MacBook Air SSD Targeted from iMac
7
Can I upgrade the SSD on the Early 2015 13" Macbook Pro?
3
Finding suitable SSD for my MacBook Air
2
Replacing Macbook Pro SSD with Macbook Air SSD
1
How can I evaluate which SSD adapter is functional with 2013 MacBook Air parts?