Why is FAT16 limited to read-only with TrueCrypt on Snow Leopard?

I'm experiencing a problem with TrueCrypt. The problem is described elsewhere but not resolved for me.

When attempting to mount encrypted containers, the following error is generated:

Other resources indicate that the problem is related to the version of MacFUSE. I have tried a few versions but have been unable to find a pair that work for my system.

It would be great to:

After switching from MacFUSE to FUSE for OS X (OSXFUSE), as suggested in answers:

Attempts to mount with write access continued to fail with the above error. I can't be sure whether this is new since I changed over.

The container I wish to open was originally created on a Windows system. diskutil info describes it as FAT16. The size of the container is 10.5 MB on disk when not mounted. When mounted as read only: 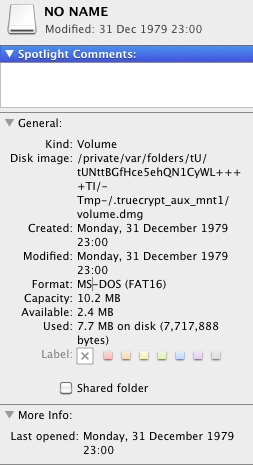 (Dates are a bit quirky?)

I have used TrueCrypt 7.1a on Mas OS X 10.6.8 with OSXFUSE 2.3.8 with no problems. MacFuse is dead. TrueCrypt's official Mac installer 7.1a installs OSXFUSE as did 7.1. Not sure how you installed TrueCrypt but if not with the Mac installer, then uninstall what you have (including MacFuse) and install using the installer.

Also make sure you have read/write/ownership of the TC container file on the disk.

The OSXFuse website FAQ (https://github.com/osxfuse/osxfuse/wiki/FAQ) says this about MacFuse: "The latest release does not fully support Mac OS X 10.6 and will not work at all on OS X 10.7 and later versions".

I had similar problem few days ago, not related to TrueCrypt though. I've also tried few different version of MacFuse and finally end up replacing MacFuse with OSXFUSE that works well so far. And by the way, I discovered that MacFuse is no longer maintained and considered dead.

Not the answer you're looking for? Browse other questions tagged mount encryption bug truecrypt filesystem .

15
NTFS-3G unmounts NTFS partitions because it “did not receive signal in 15 seconds”—what signal?

15
NTFS-3G unmounts NTFS partitions because it “did not receive signal in 15 seconds”—what signal?
3
TrueCrypt fails with fusefs kext error
3
TrueCrypt mount fails with cryptic error
11
Truecrypt error: the OSXFUSE file system is not available (255)
3
Changing 10.6.8 from mounting ext4 as read-only to read-write with OSXFUSE & fuse-ext - in fstab?
3
Formatting an external harddrive with TrueCrypt as NTFS?
2
Can't uninstall MacFuse in Mavericks