Is it possible to configure Internet Sharing to allow the computer to sleep?

I have an iMac at home in my bedroom too far away from my router, and I can't use wireless, also, 3G coverage here is awful, so I've enabled Internet Sharing so I can use my iPhone/iPad connected trough my iMac.

At work I am on a corporate network and wireless is somewhat lame and too restrictive, so I've enabled Internet Sharing on my MacBook Pro there too, so my iPhone can reach internal stuff.

The problem is: When I hit ⌘+⌥+⏏ (or  > Sleep) neither computer goes to sleep as desired; that is unless I disable Internet Sharing first.

At home I want the computer to sleep while I sleep (saves power + more silence) and at work when going home I want it to sleep too, so I don't have to close all connected apps (Adium, Colloquy, etc) and reopen again the next day.

How can I configure pmset or Internet Sharing so I can sleep my computer without running into this problem?

Note: I've already used pmset to check if there were other reasons and the offending pid is always com.apple.InternetSharing.

ControlPlane detects changes to your system called 'evidence sources'. Changes are evaluated with 'rules' which define a change in 'context'. Associated with each context are 'actions'.

One of the 'evidence sources' is a sleep/wake event. So I have configured a rule so that on a sleep event (e.g. you have clicked sleep in the Apple menu), the context 'Sleepy Time' is triggered. And for this context I have used the action 'ToggleInternetSharing' to off.

After clicking on Sleep, I get an alert saying that Internet Sharing is being turned off and after a little while (seems like forever but is probably only 10 or 20 seconds) the Mac goes to sleep.

And I have a second rule so that on a wake event the context 'Waking Up' is triggered and this has the action to set 'ToggleInternetSharing' on.

My Rules and Actions: 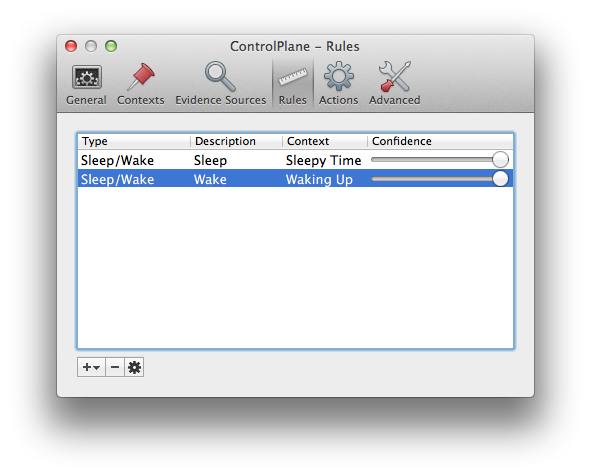 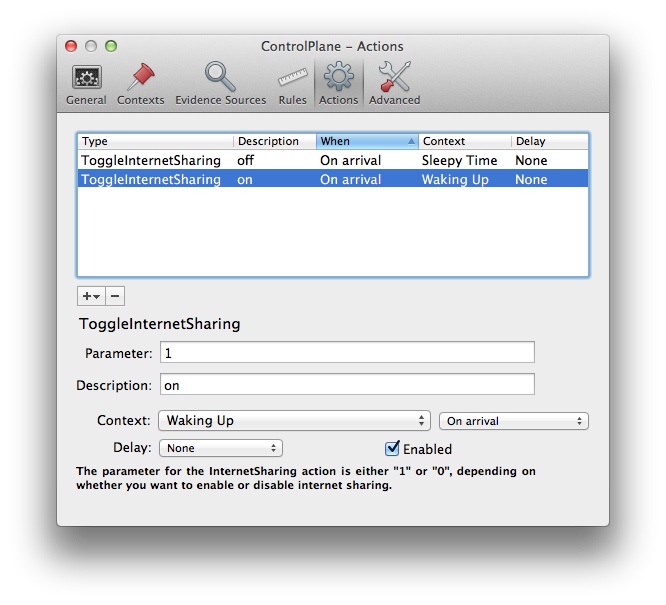 This is just scratching the surface of what ControlPlane can do.

If you are running Lion, InternetSharing is explicitely locking the SystemSleep. Have a look at:

The output of this command: DenySystemSleep is the proof that InternetSharing is purposefully blocking the kernel possibility to go to sleep. There is a simple explanation to this protection: once InternetSharing is fired, clients of this Mac may be using it as a router to access the Internet. A lot of thing may be automatically running on top of this Internet connexion without any knowledge of the person in front of the screen.

This connexion should only be broken by the admin of the system who started it and not any automatic system behaviour.

This is a safe behaviour.

Hence the correct method to ensure InternetSharing is off when the Mac sleep is to schedule 4 events in the following order:

This is the scheduling offered by ControlPlane.

It is not practical to have a Mac with Internet Sharing enabled be able to go to sleep.

The Internet Sharing feature is the software version of a router: It acts as a gateway to the internet, a DHCP server, a firewall, and a DNS forwarder. It's functions just like the routers you can buy from your local retailer; and it's free.

However, there’s a massive downside: If the Mac that acts as the gateway is turned off or asleep, then the other machines can’t get online.

This is why Internet Sharing prevents your machine from going to sleep.

Yes, you can share all those things, and more. However, when you go to access those files your Mac wakes up. This is called Wake On Demand and Bonjour Sleep Proxy.

When your Mac is asleep, it keeps the network connection somewhat "live;" it's listening on for the Bonjour "packets" to wake up the computer. This is handled by the Airport device (the network adapter) itself; not the computer. When it receives the "wake packet" the Mac wakes up and you can start of your sharing of resources.

Bonjour1 is a zero config discovery service that uses multicast Domain Name Services (mDNS) which is a UDP2 protocol (it's broadcast and can't be routed) which is a small, stateless and minimal message-oriented transport.

Basically, UDP (what Bonjour is based on) is perfect to send a message to your computer to say "Wake up!"

In order to browse the Internt (use a computer behind the gateway Mac), you need the full protocol stack which is based on TCP. It will need DHCP, NAT, firewall, etc. which means it will have to spin up all those services prior to allowing clients to browse the web. This will introduce a great deal of latency.

And going back to a more pragmatic approach, if your Mac did go to sleep and acted as a gateway, it would either never go to sleep or would be up and down like someone with a bad case of insomnia.

1Bonjour is Apple's implementation of zero-configuration networking (zeroconf), a group of technologies that includes service discovery, address assignment, and hostname resolution. Bonjour locates devices such as printers, other computers, and the services that those devices offer on a local network using multicast Domain Name System (mDNS) service records.

2UDP is a minimal message-oriented transport layer protocol. UDP provides no guarantees to the upper layer protocol for message delivery and the UDP layer retains no state of UDP messages once sent. It is simple, suitable for bootstrapping or other purposes without a full protocol stack, such as the DHCP and Trivial File Transfer Protocol.

Re. ControlPlane, this works for me ... 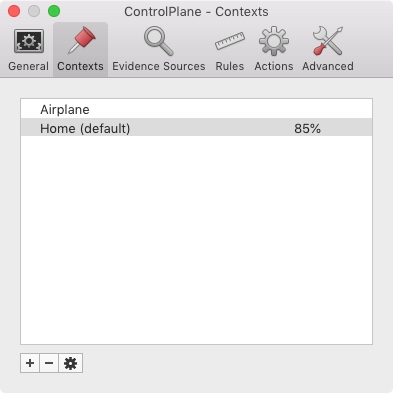 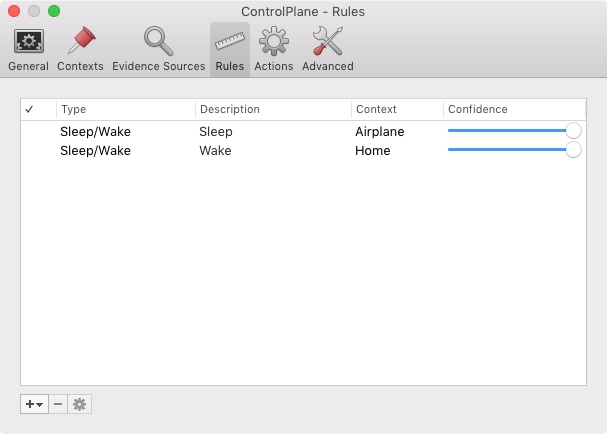 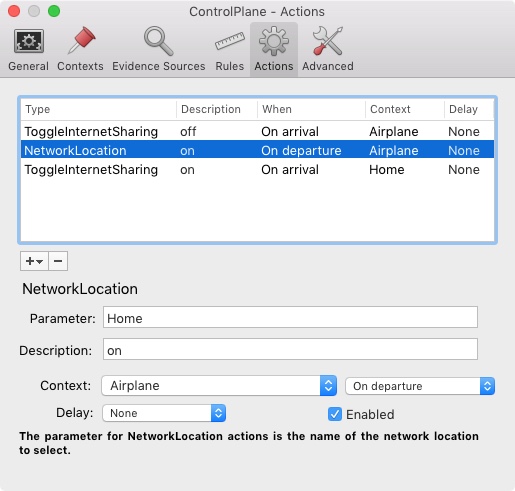 When your computer's power management unit makes the device sleep, it enters a low-power mode. Your average executable code on the computer is not run in the normal manner: the computer maintains enough power to refresh the memory (if necessary) and little else. You're not going to be able to engage in general-purpose computing while the computer sleeps.

However, there is a good alternative that you should look at. Instead of sleeping the entire unit, check out display sleep in System Preferences -> Energy Saver. In my use-case, I have a hot-corner setup (which you can enable in System Preferences -> Desktop & Screen Saver -> Screen Saver) so that when I'm going to lunch and need to lock my screen and/or just put the display to sleep, I move to the bottom-left corner. Works well for me, the computer doesn't come back up from a sleep-routine and any long-running processes I've forgotten about aren't interrupted. In your case, this means that your WiFi hotspot won't get dropped.

You can use Power Manager to put your Mac to sleep after periods of inactivity. Power Manager can overrule processes and applications that block idle sleep, including Internet Sharing.

The user guide walks through how to set this up:

Alternatively, the following recipe shows how to create a Power Manager event to put your Mac to sleep after a period of inactivity. 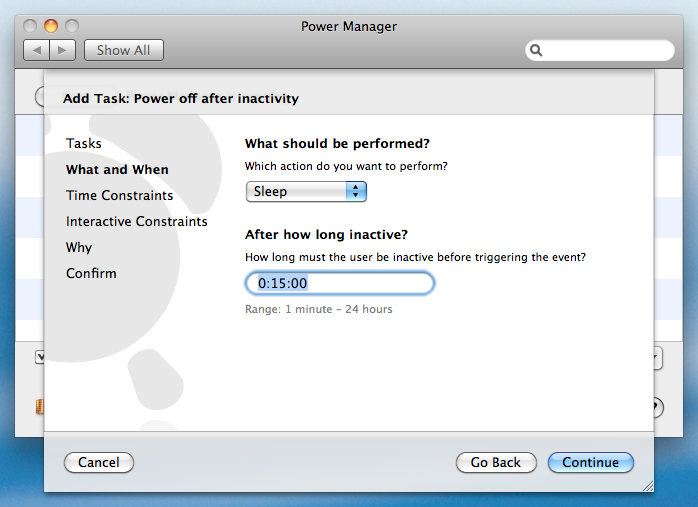 Disclaimer: I work for the company who develop Power Manager.

Not the answer you're looking for? Browse other questions tagged macos sleep-wake internet-sharing .

2
How can I enable Internet sharing without using the GUI or AppleScript?
2
How can I enable internet sharing to work automatically in Mac OS X Lion?
8
MacBook Pro won’t sleep automatically — no process preventing sleep according to pmset. What’s going on?
2
Why does Chrome prevent my Mac from sleeping?
4
Using Server 5.0.15 to share internet WITHOUT internet sharing
0
How do I find out what is keeping my Macbook from sleeping?
1
Prevent Wake-on-LAN when other devices wake from sleep or get connected to power
4
What do I need to do to get my Mac to sleep properly?
0
Can I allow Mac using Internet Sharing via Thunderbolt to talk to other devices on network?