Can I log employees' working hours through Bonjour availability?

We have a small office network with a Mac server, and all employees have their own Mac laptop they take home at the end of the day.

I am looking for a way to automatically log the employees' time at the office. Theoretically, it should be possible to periodically check for other auto-discovered Bonjour hosts on the network and deduce their time at the office from there.

Now my question is, is there an app or other readily available solution for that?

I should note that the users don't actually log in to the network nor log out. Their computers are not part of an Open Directory. I also really don't want to install or access anything on their computer directly.

I want to log their presence purely based on listening for their network presence. I also don't want to manually manage a list of computers, computers should be tracked automatically once they are discovered on the network.

At the end of the week/month I want to be able to get a list of all connected computer names during that period, with the time periods they were connected. Some graphical representation similar to day-view in iCal would be perfect, but if I have this information textual I could always implement that part myself.

I've been doing some research myself and found out about the dns-sd tool. For example:

lists all computers with AFP enabled.

It looks like you want something like NetSpy or ActyMac to monitor employee activity. It will handle what you want and more, although I'm not sure I would suggest the orwelian approach to employee management.

You may want to look into a pure network monitoring tool like Paessler.

The easiest solution would be for you to just monitor the server log on your OS X server for the time the user logs-in and logs out. A simple script that tracks the time and totals them into a spreadsheet using a nightly cron job.

You can also just use the last command as seen in the screenshot aslong as the file has not be cleared. 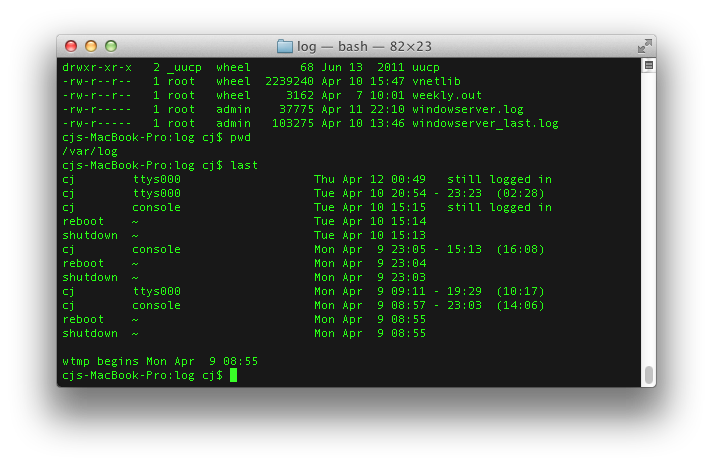 You may want to try other basic unix system logging scripts.

DogEatDogDogEatDog
56244 silver badges1212 bronze badges
1
Add a comment  |
-1
Want to improve this post? Provide detailed answers to this question, including citations and an explanation of why your answer is correct. Answers without enough detail may be edited or deleted.

Not the answer you're looking for? Browse other questions tagged bonjour .

1
How can I remove or disable Bonjour on OSX Lion, is it safe?
34
Can I list all the Bonjour-enabled services that are running?
1
Bonjour not working behind a switch
1
How can I configure OS X server to advertise SMB over bonjour?
1
How can I run iTunes without installing Bonjour in Windows 7?
4
Multiple .local hostname on one computer
3
How can I lookup the IP address of a Bonjour host?
1
Catalina cannot resolve servers in the .local domain without the domain being specified
5
How can one re-create Apple’s defunct ‘Back To My Mac’ service with specific open-source tools?