9 Monitors connected to a Mac Pro

Anyone have any experience doing this with a Mac Pro?

Anyone know the maximum amount of monitors I can hook up to a Mac Pro?

When setting up nine displays some kind of monitor stand/s that can manage that many displays will be handy, unless you want a sprawl of monitors. Something such as a 9 monitor stand/mount will be helpful to keep the displays in a usable area of space that fits on one desk. VESA display mounts and stands will be your friend to make this process flow nicely. Regardless of which stand or wall mount option you get just make sure your displays support VESA mounting before ordering them.

Also pay attention to size and weight requirements for the mounts and stands making sure it will support the size and weight of the displays you want to use. For example a typical 9 monitor stand may only supports up to 19" displays. So be sure to coordinate what you purchasing so that it will all work together, fit, and remain safely standing.

For max monitors it depends on your Mac pro. According to the EveryMac specs the maximum number of displays for 2010 Mac pros is 6 displays. 2006 - 2009 Mac Pros are noted as 8.

According to Apple's specs for the Macs that have 2 PCI Express X16 slots the other 2 are X4 but can accept an X16 card, which means that you can install 2 other X16 cards but they will run at X4 speeds and hence be a little slower than the other cards, same is true for Mac Pros with only one X16 slot hence why Apple/EveryMac has 2009 and prior Macs listed as eight displays max by using 4 cards.

For some reason Apple will only sell you 2 graphics cards for a 2010 Mac Pro as a BTO option, hence why the 6 display limit is noted on the Mac Pro technical specifications and on EveryMac.

After further observation it appears that the reason why only two cards is that the Apple ATI Radeon HD 5770 is a double height card., more than two will simply not fit in the case (see picture below). 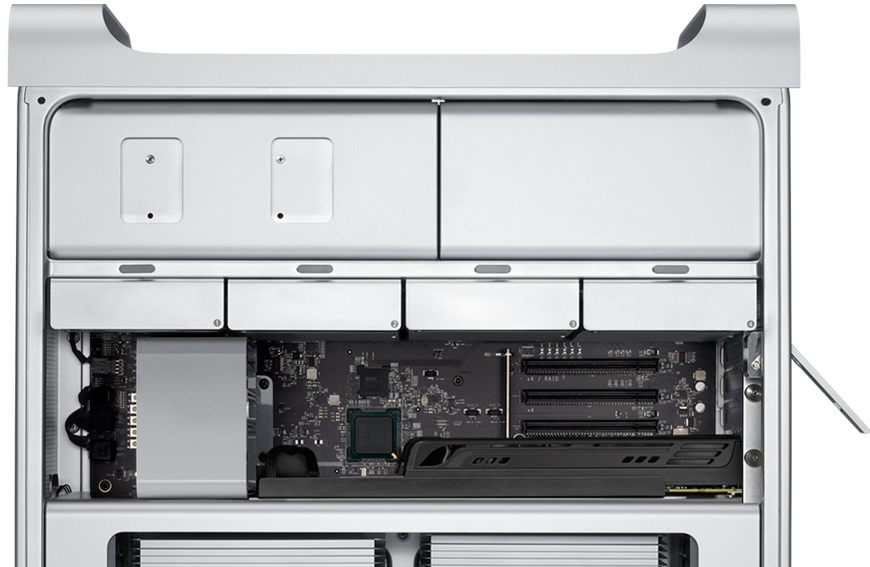 Since all of the current Mac PCI express graphics cards that support 3 displays are double height, you really can only use one of them in a Mac Pro to achieve the goal of 9 displays. 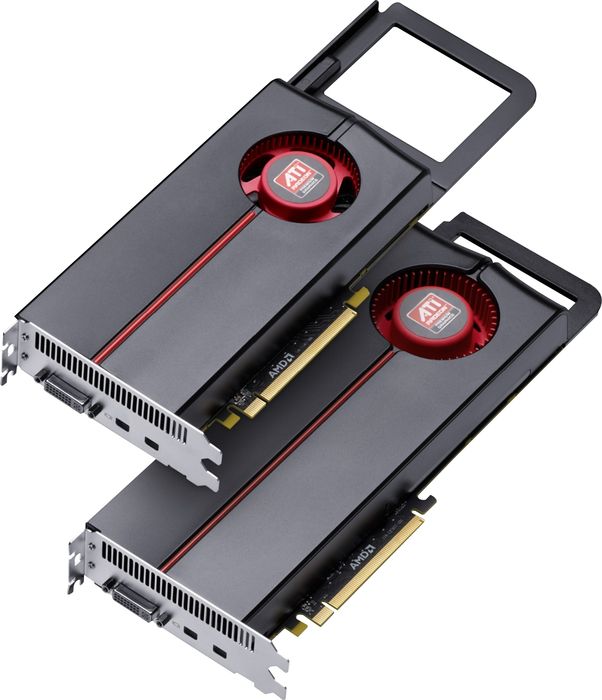 One way to achieve 9 displays is with one three-display card and three single height dual-display capable graphics cards such as the Apple Nvidia Geforce GT 120. So a 3+2+2+2 should be possible with the current 2010 (Mac Pro 5,1). It looks like the 2008 and 2009 Mac Pros also allow for double height graphics with out the card blocking the other slots, if the double height card is installed in the bottom PCI express slot. Using a ATI Radeon HD 5770 in the bottom slot, and then adding three single height dual-display capable cards in the above PCI express slots, specifically the Apple Nvidia Geforce GT 120 (as pictured below) it all should work and also be within the maximum power limitations for the Mac Pro's PCI express slots, at about 225W which is less than 300Watts. 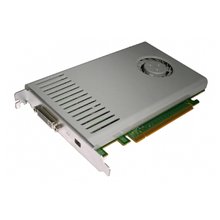 So when you choose your array of graphics cards keep in mind the power limitations of the Mac Pro. As noted in the Mac Pro 2010 User Guide, the combined draw for all the installed PCI express cards must not exceed 300W.**

For reference the Watts per card for the mentioned /available cards (Note that for the AMD cards the Watts may very since the specs may not be for the Apple OEM cards):

I've seen this in the past and presume the latest can support 9 (8 used to be the easy limit with normal two up GPU cards in all 4 PCI slots.

The current graphics cards look to support three monitors at a time, so you might get away with only three GPU cards.

You'll need a mix of mini display port and HDMI connections so you might want to just ask for a quote from Apple to be 100% sure you have everything you need to make it work.

I could see some monitor choices being problematic, but as long as you don't mind adding some converters if you need all displays to be the same input or are pushing displays that have dual link DVI size bandwidths.

If you really need high resolution and video speed, then you're going to have a hard time getting the right cards to make more than 6 monitors happen.

The limitation isn't in OS X - it can support many displays. The limitation is is how many video cards you can fit into the machine and whether OS X has good drivers for them.

Not the answer you're looking for?Browse other questions tagged display mac-pro .

4
Can a Mac Pro drive more than 2 monitors?
0
Connecting 4 DVI (or VGA) monitors to the Macbook Pro Retina
1
Do non-Thunderbolt monitors work with a DVI-D adapter on a Thunderbolt MacBook Pro?
0
What video boards can I put in a 2008 Mac Pro to get 4 monitors (DVI)?
0
What is the maximum resolution for using two external monitors with a Macbook Pro 15" Retina?
0
Retina monitors and old Mac Pro
2
Can a late 2013 Mac Pro (cylinder) support dual 5K displays?
0
Two WQHD external monitors
7
2018 Macbook Pro & Dual Monitors