I just bought an iMac and want to max out the memory on the machine. I have received two conflicting answers to my question so I'm bringing it to the community.

Can I install 4 8GB memory chips for a total of 32GB? The technical specs say it supports up to 16GB (4x4GB) but it hasn't been updated since May 2011 and was wonder if a firmware update allows it to support my proposed configuration.

The iMac has an i7 processor.

If you have the 27" iMac MacTracker says it supports up to 32GB, even though Apple only says it supports 16GB. The 21.5" iMac can only support 8GB either way. OWC, a reputable memory retailer, started selling 32GB upgrade kits for the 2011 iMac last year. 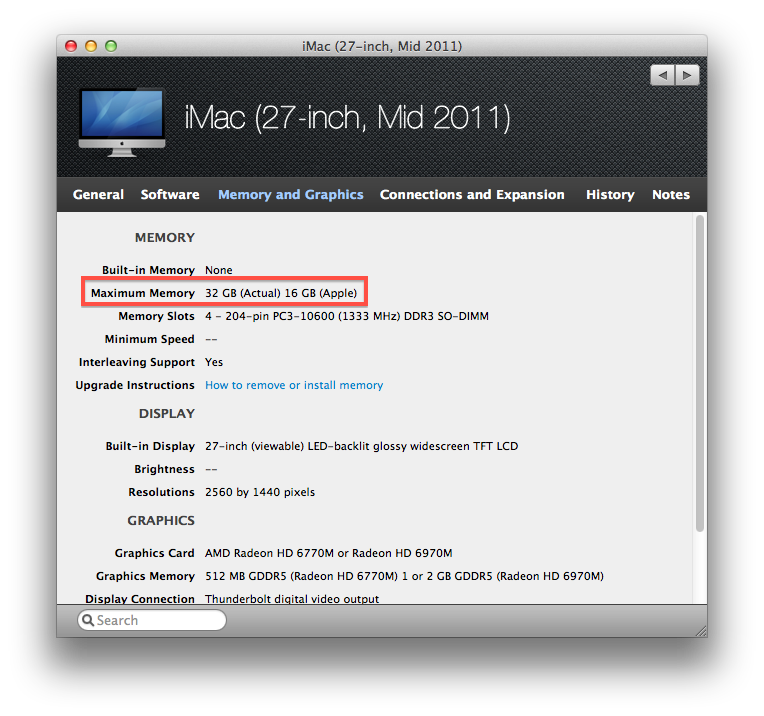 The technical specs sometimes quote an amount less than the actual maximum. Empirical observations (with the newer iMacs and MBPs), tells me that the true maximum is twice what Apple says.

The 27" iMac can be extended to 32 GB, as mentioned in this article

This site also lets you up the RAM upto 32GB in a 27" iMac, so if it wasn't possible, they wouldn't be in business. Note that these values can change with the model of your iMac, which you haven't mentioned.

You can check out your specific iMac by finding it on this list, then checking out the RAM section:

Also, here's a list of the unofficial max ram support for every Apple computer since the G3:

Note that Apple may update the EFI at any time and enforce it's stated maximum RAM, and of course Apple won't support going above the maximum RAM.

Also keep in mind that you have to match Apple's memory timing specifications for new memory very carefully. I found with my Macbook Pro that getting "close enough" still resulted in an occasionally flaky system, and I had to not only get the correct memory speed, but the same timing for it to work. That said, it does support twice as much memory as Apple states, and many people do find success adding more memory than apple recommends.

Not the answer you're looking for? Browse other questions tagged imac memory .