Why is the iPhone's default landscape orientation 'upside down'?

Upside down is probably the wrong phrase here, but whenever I start an app that uses landscape (e.g. a game) or watch a video, the first orientation is starts at is with the phone rotated left. In other words, with the volume controls on the bottom.

However, it seems more logical to me that landscape mode is better the other way up. One reason is that the +/- volume is on the right/left respectively (volume increases to the right in the display) and is easier to access with a finger than thumb on the bottom. Furthermore, since the volume button is used to operate the shutter on the camera, it should be that way up when taking photos.

Is there a reason that apps (Apple-provided and third party) have the default orientation the other way?

I was going to chalk it up to the developer just being lazy and selecting the default value and tab-completing when creating their app. However, I tried it out for myself (create a new iOS app project, edit the $AppName-Info.plist file and add the following new row):

You can see that the first auto complete option for Landscape mode is (left home button), meaning the developer had to consciously choose the second option for it to be right sided as in your app. This supports stuffe's conjecture that this is done because most users are right handed.

The screenshot above are the options for iPad. The iPhone has the same set, except for the second one, which is absent.

AFAIK, Apple doesn't advocate the use of a specific orientation as a default. Their iOS Human Interface Guidelines only say the following re: orientation

On iPad, strive to satisfy users’ expectations by being able to run in all orientations. The large iPad screen mitigates people’s desire to rotate the device to landscape to “see more.” And, because people don’t pay much attention to the minimal frame of the device or the location of the Home button, they don’t view the device as having a default orientation. This lack of awareness of an app’s default orientation leads people to expect apps to run well in the device orientation they’re currently using. As much as possible, your application should encourage people to interact with iPad from any side by providing a great experience in all orientations.

So as you can see, they don't advocate for any particular orientation and encourage the developer to support all orientations. Also see this.

However, this technical documentation uses an example with code for right-oriented apps (i.e., home button on the right). So another explanation – apart from the developer's own UX inclinations – is a copy-paste effect :)

This is because the effective pivot point (bottom left as you hold it in portrait) is already near to the pivot clamp (your thumb) and does not require you to either take your hand off the phone, or slide the entire device through your hand and substantially alter your grip.

Also, the home button remains accessible to your right thumb in this orientation.

I have created this instructional and educational video explaining the process, which you should really watch just to see my favourite Ape of Liberty T-Shirt. 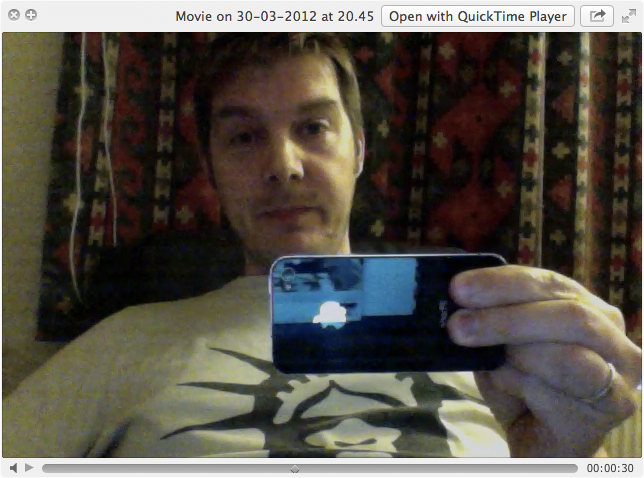 Also, I could make up some crap about Feng Shuei, and the transperambulation of pseudo cosmic antimatter, but that would be taking it far too seriously.

5
iOS 4 and Landscape Orientation Lock for iPhone
2
Keys not registering on the iPhone while typing fast, does it happen to you or just me?
13
Can I disable the iPhone's auto-rotation to landscape mode?
1
Mirroring iOS device app layouts, find apps more easily when switching devices
1
Rotate a video taken on an iPhone, and save it as an MP4
4
Notification Center stuck in landscape orientation
2
iOS Keyboard & Arrow Keys
0
Mobile data connection lost on iPhone 5S
3
Will Face ID work upside down?