Does the real-world MacBook Pro battery life scale linearly with it's capacity?

Using coconutBattery shows me that the charge capacity is 5783 mAh, compared to the original 6900 mAh. Extrapolating the math there would indicate that a replacement battery would only last for an additional half an hour!

(For what it's worth, I've already calibrated the battery with a full drain, checked for rogue background processes, and force-disabled the NVIDIA graphics with gfxCardStatus.)

Does the real-world battery life scale linearly with it's capacity?

No, because it also depends on current draw. If you have a 10 watt hour battery, and you pull 10 watts from it, you will likely get less than 1 hour of time due to losses inside the battery.

If you instead pull 1 watt from it, you'll get closer to 10 hours of usage, because the losses are not as good at lower current draws.

As batteries age the losses become worse. The internal damage that occurs over time due to the charge/discharge cycle causes additional internal cell resistance. So a new battery will give you more of its rated capacity (and use less internally during use) than an old battery. The old battery will give you less of its rated capacity (and consume more internally than the new battery) than a new battery would.

Is this number a reliable indicator of present and future battery life?

It's an estimate, and now that the battery has higher internal losses it will depend much more greatly on how much power you're drawing. If you're using the processor and graphics chipset at capacity, then add wireless, bright screen, etc on top of that you probably won't be able to use the entire measured capacity.

Therefore it's not reliable, as it depends on your actual usage scenario.

If, instead, you've got it playing itunes with the lid closed, it will use a larger percentage of that capacity before it indicates depletion.

What kind of realistic usage am I likely to get from a new battery under Lion?

Unfortunately you're trying to compare Lion's consumption with your previous OS consumption. I can't answer that question, and even if I had the same model and recently changed the battery I have a different use case, so my experience wouldn't necessarily apply to use.

I can tell you that often one battery will degenerate more than the others in multi cell pack, and if discharged under controlled conditions you can get the full capacity of each individual cell, but under heavy discharge the bad cell is a weak link, and the whole battery pack will shut down prior to depleting the other good cells.

This means that there are several good reasons to replace your battery, and the most likely outcome is significantly increased battery life.

However there's no way to guarantee that due to your individual circumstances and usage. The tools you're using are ok, but without removing and testing each cell individually under a few different discharge conditions you can't know fully how the battery will compare to new batteries. So the tools can't be counted on to give you more than a rough estimate.

If I were in your situation, though, I'd expect to get approximately the same life out of a new battery under Lion as I got out of the new battery under the previous OS. The difference might be slightly greater, but still minimal.

First of all a note, coconutBattery is a tool which helps you indicating a battery problem. It's measurements are not 100% accurate...

If you really want to know the health of your battery, I suggest you take a look at System Profiler (Applications < Utilities < Sytem Profiler) and open the 'Power' bar. Here you see information comming directly from Mac OS. It could be the same as coconutBattery, depending on what version you use, but this is the most reliable information about your battery... 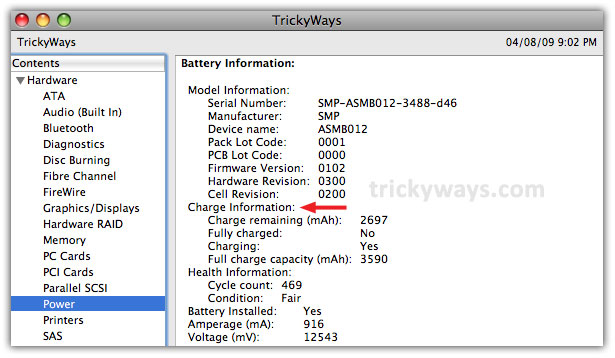 And to answer your question, I don't think their is a strict correlation between the lifetime of a battery and the number of mAh left (at least none that I found of). There's been a lot of writing about batteries, their lifespan and their health. But it depends on so much external factors, you can't make a decent prediction of it.
As your Mac ages, you battery's health will go down. Learn to live with it :) 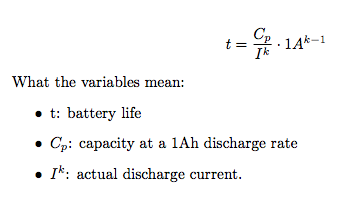 k is called the Peukert's constant and dimensionless . It's values depend on the type of battery.

As you can see in the latter equation, the left over battery runtime is directly proportional to the capacity. Therefore, for twice the battery capacity you get twice the battery life - if the discharge current is constant.

6
How long does the battery last on mid-2011 MacBook Airs?