What's the Mac equivalent of Windows' Turn Windows Features On or Off?

One of my favorite parts of Windows is the ability to selectively turn features on or off. For instance, on a tablet you can turn on Tablet PC components; on a desktop you can disable these and potentially enable other features as well.

It provides you with a list of checkboxes that lets you choose which programs and features you want to disable or enable.

So: Is there any Mac equivalent of Windows' Turn Windows Features On or Off?

I'm looking for a central place to see a list of checkboxes that display a large amount of features that I can turn on or off.

The Mac OS doesn't directly have a feature like this, mainly due to how the OS and supporting Applications are separated differently than Windows.

Looking a while back, Microsoft was having some issues with anti-trust lawsuits, and the inability to really separate IE from Windows. From how I understood it, part of this feature (at least the user facing side, not the server side) was enabled to help users 'Turn off IE'.

This grew on Windows two ways - one to let users 'remove' features that they didn't want to use, and two - to enable and disable server or other components.

Following the first of the above - this is much easier on the Mac - just drag the Application to the trash. Don't want to have iPhoto on your machine, just delete it. You can always reinstall it later from the media or Mac App Store. While certain API's do tie into different Applications (think media browsers in Pages, etc), the OS doesn't have to always have these applications to run. And to my understanding (although I have never tried it), you could theoretically remove iTunes or Safari if you wanted (although, WebKit is still being used, and may require Safari).

As for the second item above - server or other features - this is also much different on the Mac. For the actual server functions (outside of the Unix tools), you now just buy an app from the Mac App Store (you used to buy a different version of the Mac OS that was much more expensive). On Mac OS client, there is no direct way to fully remove a feature, say apache, without deleting the binaries, etc. from the actual UNIX paths. So, in this case, there really is not a direct correlation on the Mac OS.

When it does come to certain 'server-like' features in the Mac OS (for example setting up file shares, ssh, etc), these are under System Preferences -> Sharing. 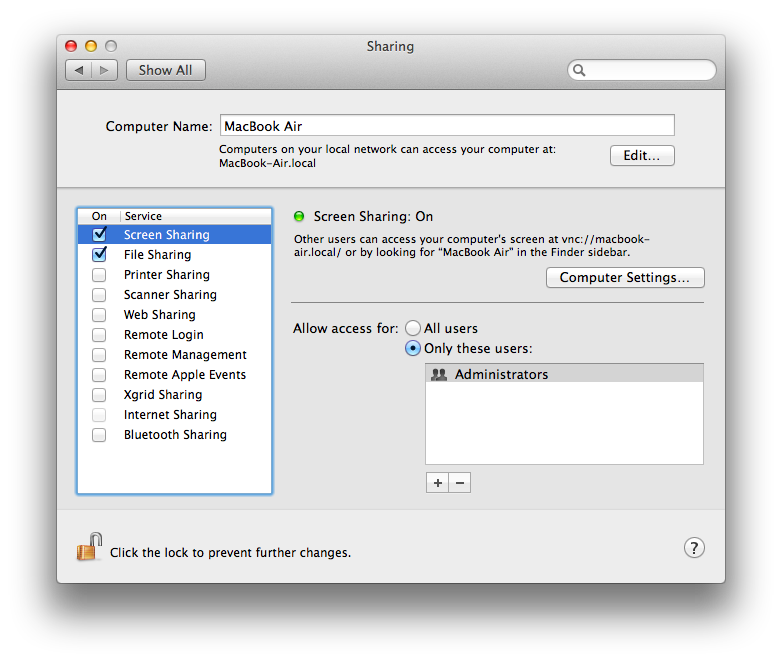 Finally, the Mac OS tries to be a bit smarter about this too. Take for example your 'tablet features' for Windows. If the Mac actually supported a tablet in that case, they would show you an item in System Preferences. A great example like this is mice/trackpads. Depending on what is actually connected to your machine, you see (if you have a Mac without a trackpad, you don't see the trackpad option - or at least it used to - my air is showing the options for a mouse right now).

To turn off specific features (say Time Machine, etc), you still have to go to each items 'control panel' if you will under System Preferences, versus one place to turn them all off. There may be tools like Onyx that let you have a bit more control over things (a review here), but this isn't really built into the OS in one place.

System Preferences. This can be accessed via the "Apple menu" in the top left corner of the screen.

Once opened, the "preference panes," as they are called, are arranged by type of category. If you're looking for a specific preference, you can also use the search box in the top right corner of the window. 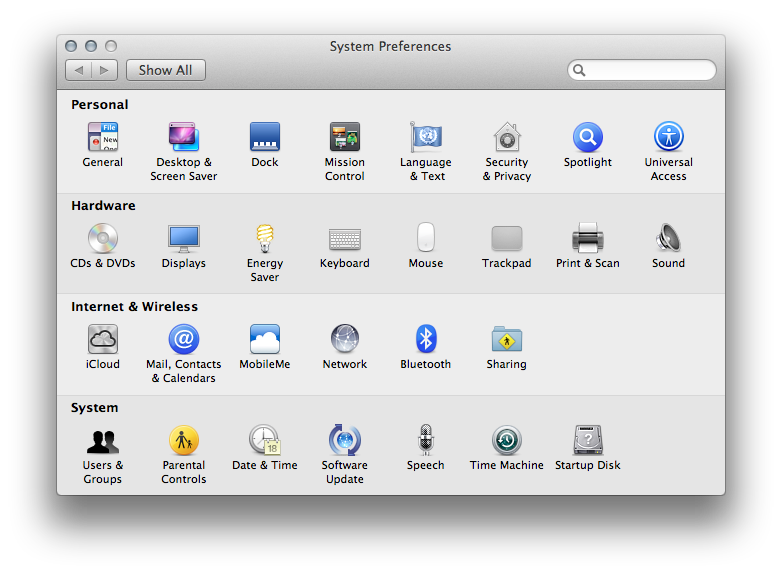 Not the answer you're looking for? Browse other questions tagged macos mac windows settings .

62
What's a good Windows RDP client for Mac?
1
Turn off Anti-Aliasing on Mac
9
What's the OS X equivalent of a BSOD?
1
How to quickly turn on/off active corners?
1
BootChamp equivalent to go from Windows to Mac
18
What is analogous to the Windows registry in Mac OS X?
0
Cannot install Windows on my Mac
1
Turn off and disable the “Coherence” feature of Parallels Desktop for Mac