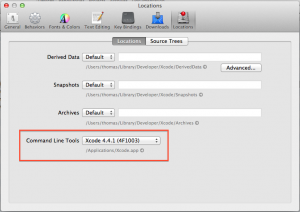 7
GCC not found, but Xcode is installed
2
Xcode installed but not recognized on App Store
0
Problem with MacPorts
11
Xcode 5.1 won't launch -- "being updated" -- but already installed
1
Is it enough to install Xcode?
0
os 10.11.6 pip install permission error
8
ERROR: 'xcodebuild' requires Xcode
2
Wiping out the development environment
1
Macports and Xcode