I am finally making the switch from Windows to Mac and one big impediment/irritant is in the switch from Word for Windows to Word for Mac. I do a lot of mathematical work and have a large number of Word documents with equations in them from the Word 2010/2011 equation feature. In the Windows version, this is just a Pi symbol that I click to start typing an equation, and I can insert functions, summations, fractions, exponents, things like that really easily. I have Word 2008 on my Mac right now and none of those documents will even open. I could try updating to the newest version of Office, but I'm worried that I'll do that, they still won't work, and I'll be out a lot of money.

I'd like to not only open all these documents but also to continue writing mathematical documents the same way I'm used to on Windows. What can I do?

Office 2011 for Mac is very much like Office 2010 on Windows. You'll see the same equation button in the Ribbon, and more buttons while you're editing an equation. I don't think you'll be disappointed.

Plus, you can always download a trial version of Office 2011 to make sure your files will be compatible!

In a blank document, go to Insert → Object → Microsoft Equation Editor to insert new equations. (If you were using Word for Mac 2011, it would be Insert → Equation.) Do you see that menu item or not? If not, note that Equation Editor isn’t part of the default install, and you might not have it. You’ll need to pop your install disc back in and do a custom install of it. Check the Value Pack Installer.

You may be interested in checking out MathType Mac 6.7. Their news release notes:

Since Microsoft has restored VBA (Visual Basic for Applications) to Office 2011, we were able to restore all the MathType commands in Word that had to be dropped for Office 2008, including an insert equation button, equation numbering, and many others.

Although many of our customers use MathType with Office, we also know that you are interested in adding equations to emails, blog posts, elearning systems, and many other applications and websites. Continuing our “Equations Everywhere and Anywhere” philosophy, MathType 6.7 expands support to more than 500 applications and websites, including iWork '09 (Pages, Numbers, Keynote), OpenOffice, Google Docs, InDesign, Maple, Mathematica, Wolfram Alpha, Blackboard, Moodle, Smart Board, Gmail, Wikipedia, to name just a few.

Some of you will be happy to know we’ve rewritten MathType’s installer from the ground up. It no longer requires Rosetta and the installation process is much, much faster.

The full feature list is listed on this page.

For users who add or edit equations in their Word docs, the new equation editor in Word for Mac 2011 is a welcome new feature that makes equation editing cross-platform with Word for Windows.

You now have several options to select from for working on equations within Word.

For you, using Microsoft Office 2011 is the best way to go, IMO.

In case you are not familiar which TeX tools in OSX, you may continue reading :)

I prefer to use TeXShop or LyX for mathematical documentation. You can also download the whole MacTeX package with is a collection of various tools for using TeX on OSX.

A very convenient solution provides LaTeXiT which allows to create simple equations and export them as a picture or other format for you to use in a word document. You can create equations with their preamble, compile them and export them. I keep the code of the equations in a simple text document in case I need to edit something later. 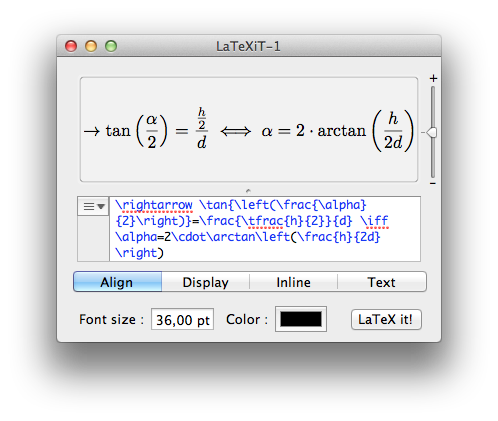 Not the answer you're looking for? Browse other questions tagged compatibility ms-office .