Do non-retina graphics looks worse on a retina display than they did before?

There are complaints that non-retina apps look terrible compared to retina apps on a retina iPad.

The retina display of the new iPad has both...

More vibrant colors will improve the looks of anything displayed on the screen. So this should make "non-retina compatible" games more fun as well.

However, all of the iOS apps by Apple are in high-res and due to the huge difference in the used pixels, non-retina apps will appear to have worse graphics.

The retina display is theoratically able to display four times the content. Apps that make use of only 1/4 of the pixel resolution are perceived less detailed. 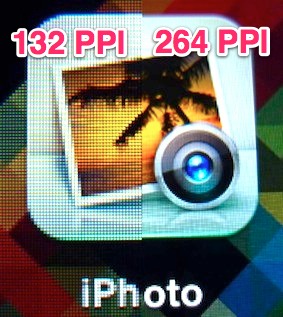 Not to me - it probably looks worse because you are seeing the difference now more readily. Subjectively things look worse because you now expect a new-iPad level display. I had this effect when iPhone 4 came out, everything looked fine until I saw one.

It's not just the increased resolution that has improved - the maximum brightness of the new iPad display is brighter and the minimum brightness is dimmer. Dan Frakes noted this in MacWorld on March 30 2012 and it is important - the screen does look better if you can adjust the brightness to the right level, bright in the sunlight and dim when you're reading in the dark. Given that I say that non-retina graphics should in fact look better on the new iPad display when greater ability to adjust brightness matters.

I don't know if you ever played Marathon for Mac, late 90's game. State of the art graphics in its day, but now it's hard to tolerate when you play it on a modern machine. Not because it looks worse on a modern LCD but because you expect so much more.

With computers, you truly never can go back.

As far as the graphics go, they look just the same on both screens. It’s just that you get used to the high-resolution Retina display very quickly, so you notice the difference when you “go back” to the old graphics by opening an app that isn’t optimized for the Retina display.

Other than that, there are other display specifications that may differ between two devices. When the iPhone 4 came out for example, I remember the colors were much more vivid on the new display than on that of an iPhone 3GS, regardless of the Retina display. I’m not sure how much the new iPad display differs from older screens in terms of color calibration, though.

Not the answer you're looking for? Browse other questions tagged ipad resolution display .