I have a few CD's that I ripped a while ago that are in my iTunes library, that have an explicit label. They play fine on my local computer.

The problem is, these ripped CDs are not marked as explicit in my iTunes library, so due to a bug in iTunes Match, when I play these songs on other devices, they play the clean versions 'Matched' from iTunes Match. Imagine my surprise when I'm listening to a song I expect to have explicit lyrics all of a sudden clean.

I know that there is a metadata 'flag' somewhere in the file that sets this, and its not available through the iTunes interface. I have seen online that there are tools to edit this flag, but then either hear that it doesn't actually do this, no real decent walk-throughs, or even discrepancies on which field to edit. What do I need, and how do I mark these songs as explicit to then get matched 'correctly' in iTunes Match?

Update: The answer from gentmatt does let me set the Explicit flag on the files as I was hoping to do. I thought this would solve the problem, but it does not. Also, I noticed that various other albums, with explicit lyrics, do actually sync correctly. The only problem albums I have are a Kanye West album, and a Jay-Z album. But with this question being related more towards how do I get them to work correctly in iTunes Match, im continuing to look for answers.

Final Update: This was an issue with iTunes Match. After a while, I tried downloading them again, and it pulled the right ones. There were several albums that reported this way, and they are continuously working on it. So it was less of an issue with my actual files, and more of an issue of how the files were indexed on the iTunes Match server side.

...allows to edit (almost?) any metadata to a song manually.

You can use this tool add the explicit label to a song. I've successfully tested version 0.14 in Lion. 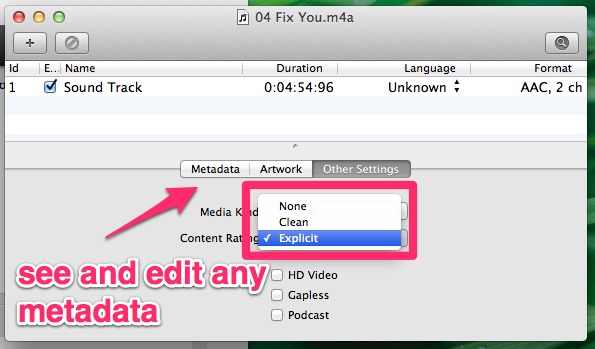 I sent an email to iTunes store support. This is what they said:

I understand that iTunes Match is providing the clean versions of certain explicit songs. I imagine that you are eager to enjoy the original content. I am happy to look into this for you.

This is a known issue that Apple's engineers are currently investigating. At this time, I don't have an estimate as to when the issue will be resolved.

Not the answer you're looking for? Browse other questions tagged itunes itunes-match metadata .

18
How do I force iTunes Match to re-evaluate certain tracks
7
Why does iTunes Match match only some songs from the same album?
4
Can iTunes Match grab "invisible" (placeholder) songs?
1
Is the iTunes Match Limit for ALL Songs or just Matched Songs?
11
How can I get explicit versions of songs from iCloud?
0
iTunes Match not downloading high bitrate version of songs
1
How can I view recently added songs in iTunes grouped by Album like the Songs view does?
2
iTunes Match mismatch between OS X and iOS