I often use RDP clients (like Microsoft Remote Desktop or CoRD) to access my work machines to use Visual Studio at work. This actually works pretty well, except for when it comes to using the Function keys (especially F10 and F11 for debugging).

As you can see, the problem is that the Mac OS now also uses these keys for mute and volume down respectively. You can hold down the 'fn' key and get access to these, and sometimes that doesn't even work directly, you have to hold down Command too. This slows me down quite a bit. I have built up some serious muscle memory for Visual Studio key commands, and would like to replicate them as close as possible through Remote Desktop.

I am looking for a workflow that will:

It looks like Microsoft's RDP client allows you to change key commands, but not add new ones. And wasn't sure if there was another method I could use to incorporate these commands just for when RDP was the front-most application

The easiest way might be to disable the Fn key. Since you say that using Fn+F10 works, you could go into System Preferences > Keyboard > Keyboard, and enable Use all F1, F2, etc. keys as standard function keys. This way you no longer need to press Fn to send F10.

The second solution is on the PC side. You could install a utility such as AutoHotkey on your PC and remap the keys there. That way the keybindings will only work on the PC. Lifehacker has nice looking tutorial about this. In AutoHotkey, you can decide which applications the shortcut applies to, but in your case it seems like a global hotkey would work since it is running on the PC side.

Another solution might be to try one of the ways to create keyboard shortcuts menitoned in this Lifehacker article. This article's goal is to help you do similar things that AutoHotkey let's you do on the Mac.

Looks like the new Jump Desktop app for Mac will do this. 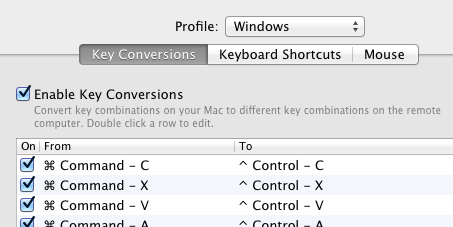 I've not tried it yet, but the iPad app is highly regarded.

Not the answer you're looking for? Browse other questions tagged macos keyboard remote-desktop .

4
'Show Desktop' Mission Control/Expose Not Functioning
85
How do I get F11 and F12 to behave like normal function keys?
3
MBP: F1-F9 & Right Shift Not Responding
2
Map volume controls to Function Keys on Sierra
18
Can I use Shift, Alt and Control Modifier Keys Together With the Function Keys on the Touch Bar?
0
Detect fn and function key simultaneously pressed