Gigabytes of disk space shown as hidden space in DaisyDisk

My disk space usage doesn't add up. I should have used only about 80 gigabytes, but according to DaisyDisk about 25 gigabytes is taken up by hidden space. The mystery disk space seems to be classified as other in the About This Mac window. 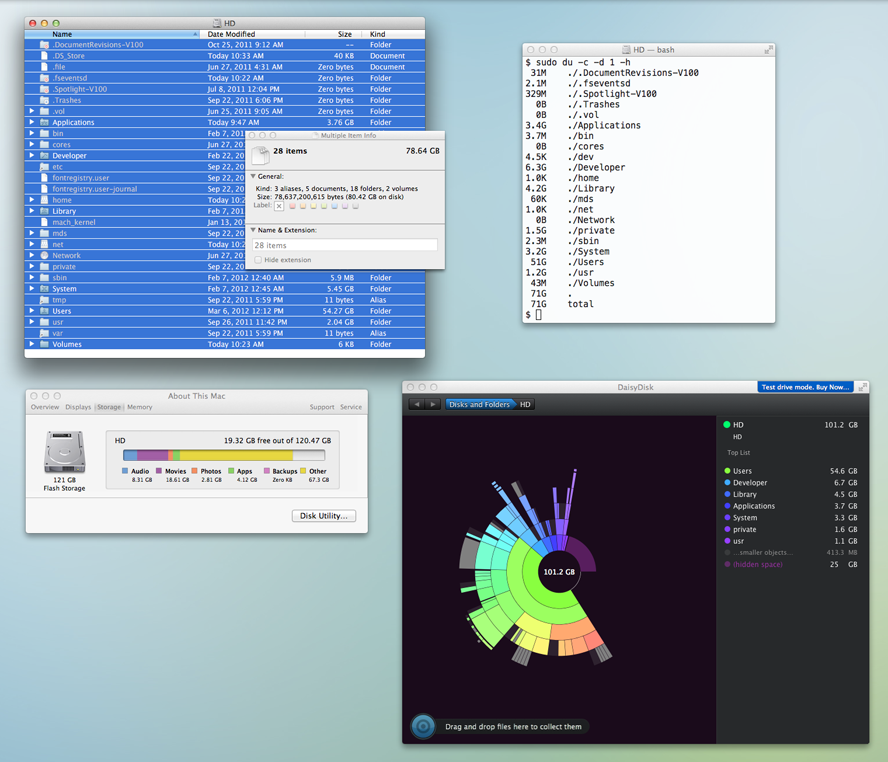 Does anyone know what the hidden space could be or how I could free it up?

Possibly related to Macbook HD "Other" all the Sudden Almost Full.

Starting up from the recovery partition and repairing the disk fixed the issue. (Disk Utility showed an error about an invalid free block count.) Thanks @cksum.

DaisyDisk's hidden space (if scanned as administrator) should be within 4-8GB limit for most Macs. If the numbers are larger, try repairing the volume as this may serve an indicator for file system errors.

Another possibility—and one that ended up being the culprit in my particular case—is that your machine is making local backups when it's unable to connect to your external backup source. In this case, you can just disable the backups by entering the following command in the Terminal:

Later, if and when you decide to re-enable the backup, you can reverse it with the following Terminal command:

Update for MacOS Sierra and Later

It seems like the disablelocal and enablelocal commands are no longer available. As an alternative you can delete local snapshots by doing the following:

Sometimes the amount of "used" space on a disk may appear greater than the total size of all scanned files and folders on that disk. This is normal. The difference is usually taken by the file system overhead and system stuff like Spotlight index, but in certain cases a significant amount of disk space may be hiding in other users' accounts or folders that are normally not visible to you. In order to reveal those folders you should scan the disk as administrator.

(Hidden space) is a virtual disk map item that only appears when the total size of restricted files is significant, so you can see whether it's worth rescanning the disk as administrator or not.

In case you have a lot of hidden disk space when running it as administrator, it's possible that you have file system errors or broken file permissions.

Just ran sudo rm -rf /.MobileBackups.trash and got my space back.

In my case I was missing 771 Gigs of space. I had to clear my /cores folder. Apparently an application was crashing and leaving core dumps the amount of space missing was the exact amount of disk space in the cores folder.

Another possible culprit could be homebrew (if you are using it). By default, it keeps old vesions of the installed packages after updates. In my case, this summed up to ~11GB. Run brew cleanup -n to see how much space these backups take up on your machine (this won't delete anything yet. To do so, leave out the -n flag).

Not the answer you're looking for? Browse other questions tagged macos disk-space .

36
How can I clean up 'Other' storage on iPhone 3G?
2
Macbook Pro i7, Hard Disk space filling up before my eyes (Mavericks)
2
Clear large .MobileBackups files/folder?