How can I fix a dialog when installing a New Version of Maxima Over an Older Version?

I previously used an old version of Maxima, but since migrating my old Mac to my new M1 Mac, the binary would not launch.

So I used 'AppCleaner' to remove all support files and binaries for Maxima, and for wxMaxima. I then downloaded the latest version: Maxima-5.41.0-VTK-macOS.dmg. First thing was to run:

.. on the newly downloaded DMG file. I then copied the binary to /Applications and tried to run it. The error message is as in the screenshot, which in English would be 'unable to send Apple events to the Terminal' or something similar. 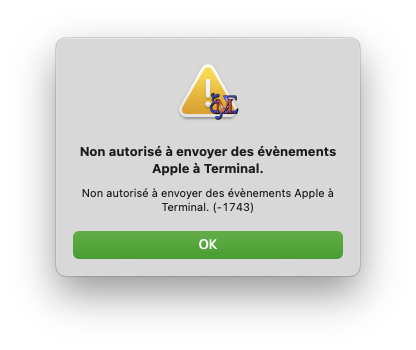 I looked on 'Ask Different' and found this, which advised me to run the applet in /Applications/Maxima.app/Contents/MacOS. But that gave the same result.

For info, this is a Mac Mini running Monterey 12.4.

2
Error “Not authorised to send Apple events to Terminal.” when starting Maxima

5
Java WebStart fails on Mac OS Mountain Lion
1
How can I find my Java directory in 10.8.3?
4
A new macOS version exists, no update available from the App Store
6
Installing Older Version of MacOS/OSX alongside current
1
Is there any way to run incompatible apps from future versions of macOS?
2
How to handle java apps lacking ARM support using java SDK on M1 Mac?
0
How to add version to an Automator service workflow
1
Migration from Intel Mojave to Monterey M1 mac