Can my old iTunes libraries be transferred to my new computer?

It took me long, tedious hours and a lot of effort to digitalise vinyl and taped music (from the 60s onwards) as well as copying umpteen CDs to my iMac that I bought in 2011 and now uses Sierra 10.12.6 and iTunes 12.8.2.3. I now want to buy the newest M1 computer using Ventura and I've found out that iTunes no longer exists. Everything I've read so far only talking about transferring music bought from Apple. Can my old iTunes libraries be transferred to the new Music app. If so, how, or do I just give up and keep my old computer?

Apple Music [without any subscription] is really just iTunes with a different label.

Funtionality has been split, so iPhone/Pad interaction is now done from Finder. Instead of launching a separate app to sync/backup your iPhone etc, the functionality [& most of the look] is now right there in the Finder instead.
Music itself still looks similar to how iTunes looked, with Artists, Albums, Songs, Playlists etc down the left. 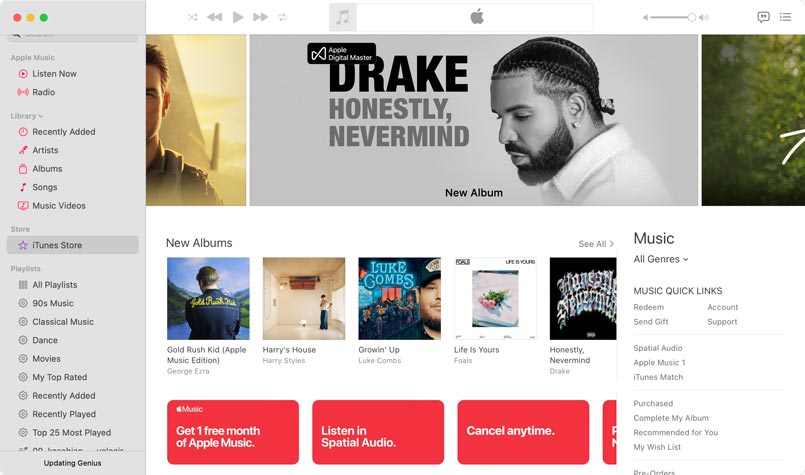 It still defaults to trying to sell you new tunes from the Store, but if you're not interested in that you can ignore it, same as iTunes.

If you migrate* your old Mac to your new one, everything should transfer intact.
*Make this the first thing you do as part of your initial setup on the new Mac. It makes things much easier than trying to do it later.

Not the answer you're looking for? Browse other questions tagged itunes imac music .

1
iTunes can't download song purchased from old computer, on to new computer
3
Editing songs in iTunes 11.0.2
1
Sync iTunes library with Dropbox without letting iTunes organize the folders and files
1
How do I copy music from iphone 4 to iphone 5s and windows computer?
0
Need old music transferred to new computer
3
Can I hide purchased music from the Music app in iOS 10?
0
Need Help Saving iTunes Preferences
1
Multiple AppleIDs across two iMacs
3
How to fix paths when iTunes truncated path names after adding music to a folder
1
"Moving" MP3s from one mac book to the next?