My current laptop runs an i7 with 16GB RAM. However, I'm looking to upgrade for compatibility with macOS Ventura in the fall. New M1 Macs being expensive, I'm looking to slim down the cost while still having necessary performance. Would 8GB + M1/M2 work better or at least the same as / comparable to i7 + 16GB?

EDIT: My computer's processor is "MF843LL/A 3.1 GHz dual-core Intel Core i7 processor", early 2015. Does that give more information?

Just upgraded my intel based systems to M1 too, so did quite a lot of benchmarking over the weekend. Tested quite a few old macbooks and even old top spec trashcan MacPro.

It is subjective and I am sticking my neck out there, yes, M1 based MacBook Air or Pro, even at the lowest spec of 8GB RAM can easily outperform the top of class 2015 MacBook. (Geekbench on CPU is clear, I have attached the results below too.)

Your concern about RAM usage efficiency, it depends on your use case. If you handle lots of large videos or photos, you probably would be struggling on the 16GB intel a bit anyway, talking about opening many files of hundreds of MB or a few GB loaded in RAM like photos/videos/Database/etc.

Try not to just focus on CPU/RAM. The overall system is much faster with latest architecture. SSD read/write is much faster than the 2015 system. T2 features embedded are often overlooked too, it is much faster for some "niche" sec to encode/decode videos/images or just for better FaceTime quality with it.

(Consider spending the extra 200 bucks to get to 16GB RAM and your new upgrade will be every bit/byte better, it will help your new mac to last for another 5-7 years. And with better resell value at the end.) :)

To share a couple more things from my recent upgrade: 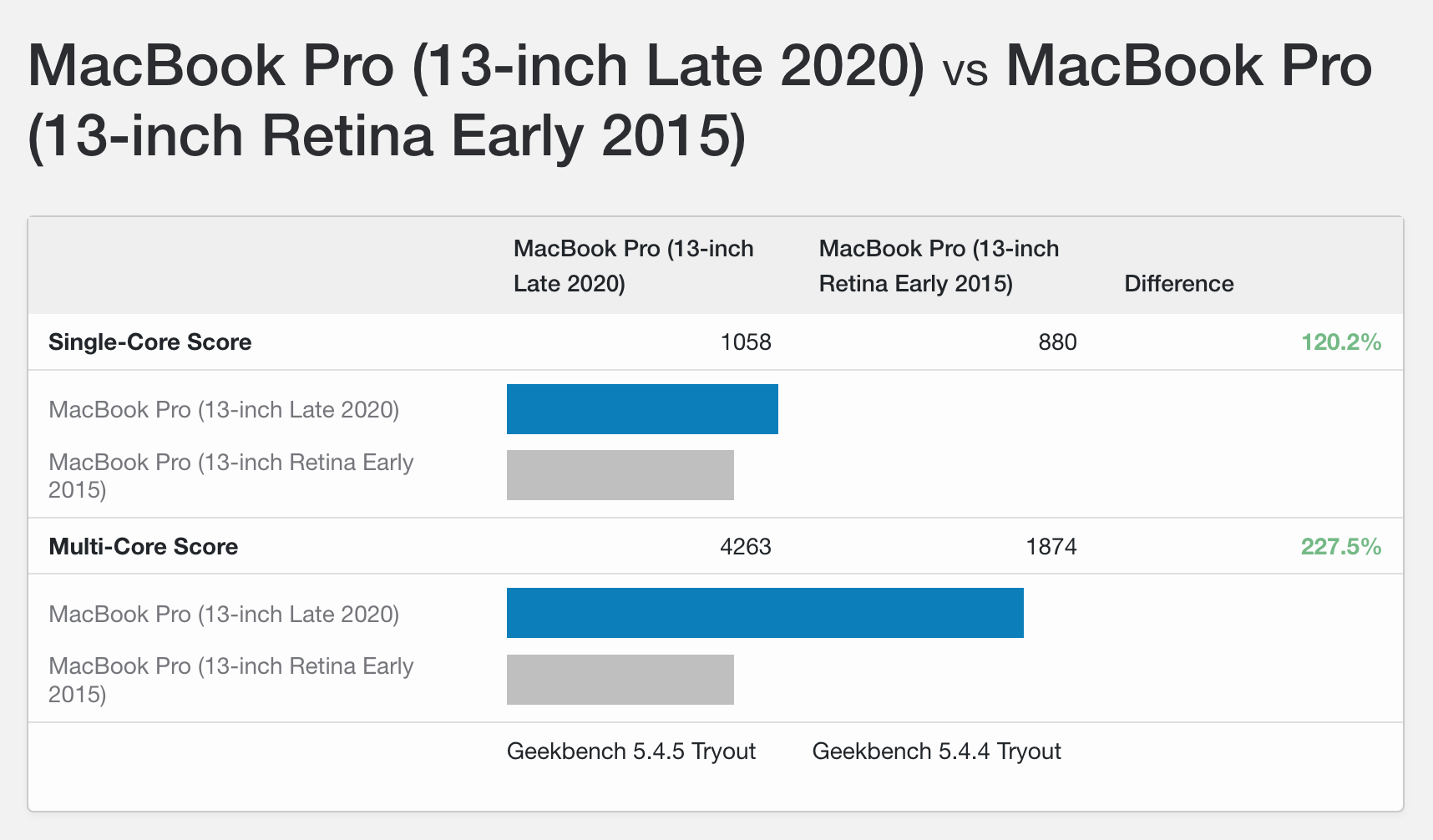 It is impossible to say with the information you have given. There's more than a factor of 10 difference in performance between the slowest i7 processors and the fastest i7 processors. Knowing exactly the specific models you're comparing is vital here.

The question of "RAM-efficiency" really hasn't got much to do with the CPU itself. As the i7 CPUs and the Apple Silicon CPUs are all 64-bit processors, there's not much about the CPU that determines "RAM-efficiency" - that is almost entirely down to the operating system and your applications.

There are minor advantages to modern CPUs in terms of having a performance surplus that allows you to enable better memory compression than you would on a really old system - and there are some benefits of having multiple page sizes, etc. However, that usually does not make any practical difference when comparing a fairly recent i7 to the Apple Silicon CPUs.

You have now specified that you're comparing with an i7-5557U processor. That's a CPU from 2015. In terms of generic benchmarking, you would expect even the slowest M1 CPU to be 4-5 times faster than your old CPU. However, remember that's benchmarking and doesn't apply 1:1 to your actual work-flow. Especially make note that there's a big difference between single-threaded performance and multi-threaded performance on modern CPUs.

Also note that this type of benchmarking only relates to the compute-performance of the CPU - not to the entire system that makes up the computer. The difference in RAM size (8 GB vs 16 GB) can make a huge difference for your particular work-flow. I.e. if you mainly use your computer for things that take up 16 GB of RAM, but really does not use the CPU - then that is probably going to run less smooth on an 8 GB system.

To sum it up, noting that it is highly subjective and really dependent on your particular work-flow, then in general most users would expect and find that a new M1 system performs vastly better than an i7 2015 MacBook Pro.