Does the iPad (2012, 3rd generation) have the most pixels of any tablet's display?

I have heard this as a factoid from somewhere, and I'd like verification of it before I use it as a factual piece of information.

The new iPad (2012, 3rd generation) has a super high pixel count. Does this make for the highest resolution of comparable tablets on the market (i.e., those with similarly sized screens)?

Due to the (good) edit of the question, the answer does not seem fit 100% anymore.

...which depends on what you define as a 'mobile device'. But first, the term resolution is ambiguously used which requires to answer your question in two ways.

Resolution as in pixel density

The iPad 3rd Generation has a pixel density of 264 pixels per inch (ppi). There are several other devices that provide higher pixel densities - the most well known to you is probably the iPhone 4(S).

As these belong to the mobile category, the answer is no.

You can get a list of more devices here.

Resolution as in total pixel count

The display of the iPad 3rd generation is referred to as QXGA (2048×1536). There are several other devices that provide higher pixel counts - e.g. the Apple iMac.

However, none of the following devices are 'mobile'. They provide higher pixel counts, but over a larger area. Hence, the answer is yes.

See this list of common resolutions for more devices. Note: Some of the resolutions stated there are only on paper - no devices implementing that resolution have been made yet according to the article.

For this answer, let's define that…

…the sharpness of a display is the ability to distinguish two distinct pixels.

There is no industry standard for retina display, therefore I'll follow Apple's use of the word. The term retina display is relative, as the definition follows the human eyes's perception of a display's sharpness: 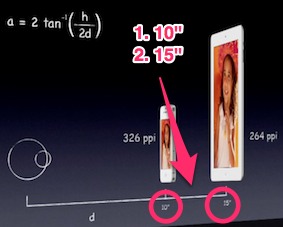 The second picture means "300 ppi is the limit of the human retina at a distance of 10 inch"!

While the iPhone 4S is commonly used at a distance of about 10 inches to the eye, the iPad will be used at a larger distance - e.g. 15 inches. Therefore, the iPad can have a similar reception by the eye even though the pixel density is lower.

What does the formula mean? Let alpha be the angle at which the human retina will see two distinct pixels. d is the perpendicular distance to the display surface. h is the distance between two district pixels in one dimension.

As you can see in the table, the minimum angle at which the human eye can distinguish two pixels is larger than what it can see for both on the iPhone and the new iPad - at normal distances.

The perception of distinct pixels with the new iPad is even better than with the iPhone 4S. Apple is being fully reasonable when calling the iPad's display a retina display.

No other tablet can compete in similar measures for PPI and display size of the iPad. It's even sharper then the iPhone in normal use! It's the sharpest display on the market.

Of course, this assumption is based on the fact that the displays are able to display any two pixels that are next to each other - which @checksum has pointed out in a comment.

As mentioned in this answer, there are competitors with higher pixel densities, but not at the display size of the iPad 4G (9.7''). Furthermore, it's not clear to me if they are able to display each unique pixel like it IPS displays used by Apple can.

Short answer: yes, in a way

Long answer: the iPhone 4 is one of several devices with higher pixel density, often expressed in pixels per inch. But such screens are smaller, with a lower total pixel count.

The "bragging rights" therefore are in creating higher-density screens at larger sizes, yielding lots and lots of super-sharp pixels.

Qualified in the "mobile device" category, there was nothing on the market with a higher pixel count when the third-generation iPad was released. And total pixel count is one of the ways people use the term "resolution"; density is the other.

24
What exactly is a retina display?