Moving from original iPad to new iPad (2012): Is a cover like Apple's black one available for the new iPad?

I'm upgrading from the original iPad (2010) to the new iPad (2012). I skipped the iPad 2 and the Smart Cover, so I don't have any compatible cover accessory for the new iPad.

I did try someone else's iPad 2 and Smart Cover before, and while I think the Smart Cover design is clever, it does little to protect the iPad from a fall, or the back from scratches. And, while the magnets are strong, the Smart Cover can still separate; i.e. don't have a 4-year-old yank an iPad 2 by the Smart Cover and expect it to stay stuck!

What I would really like to shield my new iPad is something almost (but not quite) exactly like the cover I had for my original. Of course I'm referring to this: 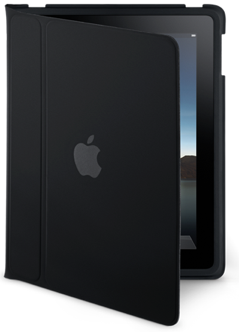 What I liked about the original black iPad case/cover is:

I already tried putting my new iPad into the old iPad case/cover, and some things don't line up (power button, notably), and it's lacking the camera hole at the back, and it's no longer a tight fit since the new iPad is slimmer.

Is there a third-party / aftermarket case almost exactly like the Apple one pictured above, but designed for the new iPad (2012)? I'm hoping some company might have closely matched Apple's original design.

Targus is advertising iPad 3 cases and one of their portfolio style cases may suit you.

Many iPad 2 cases will work with the new model. Although I haven't tested any of these on a new model iPad, you might consider:

Beyond that, a search for iPad portfolio will produce a multitude of choices.

There are many iPad cases up on Amazon, some with the necessary cutouts for the cameras and controls of the iPad 2/3 and some without so be aware.

I have this one for my iPad2 and it's worked quite well. It's slim, has enough padding, has magnets that turn the screen on and off and allows all functionality.

The Case Crown cases are also nice but they're a bit thicker, mine's closer to the slim original Apple iPad case which my wife has on her iPad 1.

(Thought I should add this answer in case anybody comes across this page.)

Since I asked my question originally, of course Apple introduced the iPad Smart Case, which combines features from the original iPad case and the Smart Cover. The Smart Case has a front much like the Smart Cover, but includes a backing part that better protects the iPad. Reviews here and here. Here's what it looks like: 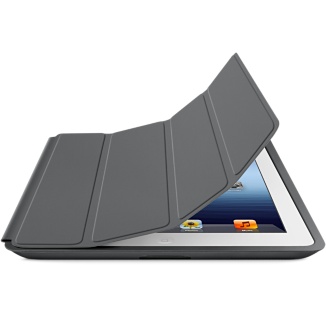 See it in the Apple Store online here.

7
Will an original Smart Cover work on an iPad 3?
2
longevity of iPad Smart Cover
0
What cases exist for the new iPad (3rd generation) most similar to Apple's 1st generation case?
4
Is there any way to disable the Home button on an iPad?
1
iPad 2 16gb WiFi can no longer connect to home WiFi after iOS 6 upgrade
2
Keeping New and Old Ipads
1
iPad mini Smart Case problem - Sleep when folding over the back
2
3rd party power adapter causing screen glitches?
2
8th gen iPad I want to go back to the original configuration after quick start
1
Did Apple make magnetic Smart Cover accessories for the iPad Air 1?