Will an original Smart Cover work on an iPad 3?

I bought an iPad 2 and Apple smart cover last year, before they updated them and got rid of the orange color. Now I'm thinking of upgrading to the new iPad, will my Smart cover work on the new iPad or do I have to shell out another $40 for a new one?

(The reason I ask is because I think the dimensions of the new iPad are slightly different? and the sides are apparently more curved?)

According to the Smart Cover page on the Apple store:

Also at the bottom of the page: 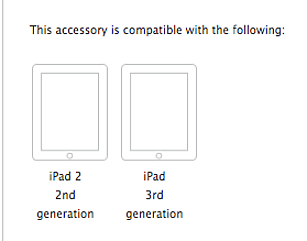 So, the answer, based what Apple has said, is yes, the original Smart Cover will fit both the iPad 2 and the iPad 3.

There are also several questions linked in the product page that say that the cover will fit.

Edit 9/1/12:
I did mean to update this when I found the link, but I lost it for a time and recently found it again.

According to a MacRumors report on March 22nd, some people did (and presumably still are) have some trouble with the magnets on the iPad 3. According to Marc Booth, Apple changed the polarity of the magnets sometime in 2011, because "some iPad 2 customers were having issues with their iPads entering sleep mode when they flipped Apple's Smart Cover around flat behind their iPad 2". Marc also reports that "Apple is replacing older Apple Smart Covers at Apple Stores for customers who ask."

That it will. There is no change to the smart cover range.

(See here:- the product number is the same as the one I have, and it says compatible with both.

It could depend on magnet polarity.

Reports on the Apple support forums say that the company will exchange defective covers for new ones at the Apple store, and third-party manufacturers including Targus and Maroo are also offering replacements.

Not the answer you're looking for? Browse other questions tagged ipad smart-cover .

4
Is there a way to effectively clean a Smart Cover without causing damage?
4
How to upgrade an iPad without losing data?
3
Moving from original iPad to new iPad (2012): Is a cover like Apple's black one available for the new iPad?
2
longevity of iPad Smart Cover
1
Smart Cover and Sim-tray
0
Smart Cover on/off no longer functioning
0
Is the iPad Smart Cover flammable?
3
My iPad Mini isn't responding to the magnets in the cover; any fix?
0
iPhone vs. iPad sound?
1
Did Apple make magnetic Smart Cover accessories for the iPad Air 1?