How to get VMware Fusion on Mac to use Logitech extra back/forward mouse buttons in Windows VM?

Problem: When running Windows (whether XP or 7) as VMs under VMware Fusion, the MX310's back and forward buttons no longer work in Windows as they are supposed to. Under Windows XP, nothing happens. Under Windows 7, they have the effect of moving and resizing a window to occupy the left half of the screen, or the right half of the screen (depending on the button pressed.) So, I think there is a signal getting sent to the VM, just the wrong one.

How can I get the back/forward buttons working properly within my Windows virtual machine instances under VMware Fusion? I'd even be happy with some key/button re-mapping kludge running under the Windows VM that simulates what they're supposed to do in the first place .. but something that gets VMware Fusion sending the right message would be better.

To expand on what CajunLuke said about changing the configuration on a per app basis.

If you have Logitech Control Center for OS X installed you can use Advanced click settings for just VMFusion using the following steps. 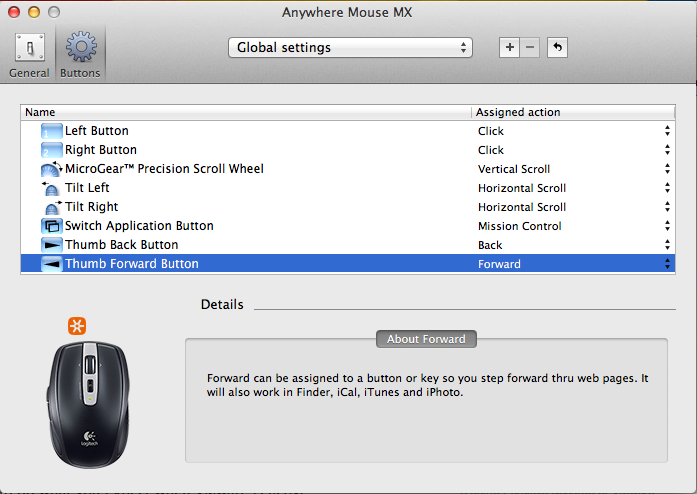 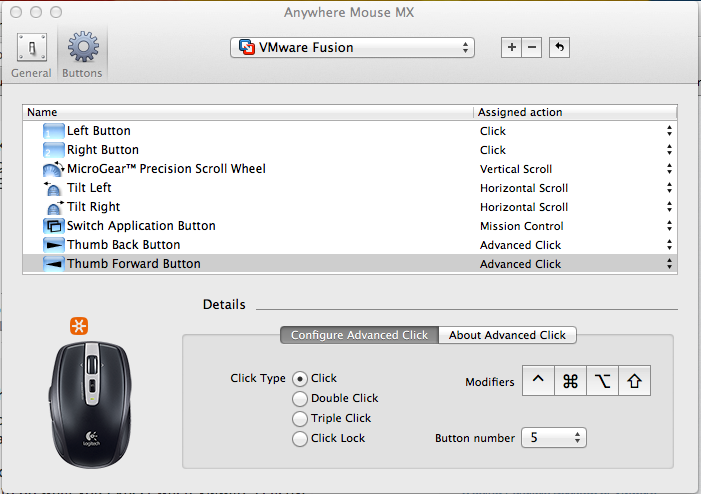 I use win + left and win + right for screen snapping in windows, so key mapping was not an option for me. Advanced click allowed me to keep the windows shortcuts intact as well as use my forward and back buttons on my Anywhere Mouse MX as intended. I have tested this in Win8 full screen and single window and it works beautifully. I'm not sure about unity because I haven't used Win8 in unity mode so I did not test. Hope this helps others. I know it took me forever to find the anser I needed.

It seems like VMware is sending the buttons to Windows as Win-← and Win-→. Go to VMware's preferences (as opposed to the individual VM's settings) -> Keyboard & Mouse toolbar tab -> Mouse Shortcuts tab. You may be able to modify the settings in there.

Alternatively, you may be able to change the keypress generated by the mouse button in OS X on a per-app basis and change it to do what you expect when VMware is active.

Please note that the solution above - "If you have Logitech Control Center for OS X installed you can use Advanced click settings for just VMFusion" - causes 5-10 second hangs with Mac OS X Mavericks + VMWare Fusion 6 when switching between VMFusion (a particular set mouse settings for VMWare Fusion only) and another Mac OS X program (the global set of Logitech mouse for all other programs). It seems that the problem is the current (latest) version of Logitech Control Center's incompatibility with Mavericks - it worked OK with Mac OS X Mountain Lion (no hangs) but not anymore with Mavericks.

I got around this by deleting in the Logitech Control Center the VMware Fusion specific settings and using only the global/general settings. I then used VMware Fusion's "Key mapping" function (as mentioned above) to remap the keys and it works fine now.

(Thanks to VMware support who have been great with looking into the hangs and then it now turns out that the problem is not VMware Fusion but Logitech's software.)

Not the answer you're looking for? Browse other questions tagged macos windows mouse vmware driver .