How should I proceed when I get the "Unable to Purchase" alert from the iOS App Store?

Recently, whenever I want to buy something from the iOS App Store or update my existing apps, I get the usual password dialog, but after a second that disappears and I see the following alert: 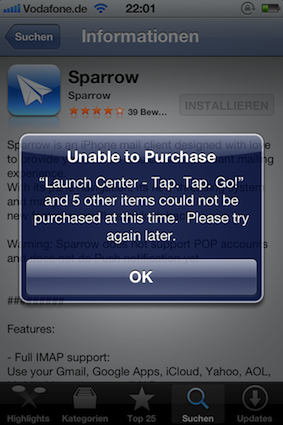 After clicking OK and then entering my password the app installs just fine (and gets billed correctly).

Strangely sometimes the apps mentioned in the Unable to Purchase alert get marked as Waiting... on the homescreen, even though there are no updates for them.

When this happens I am unable to start those apps, until later, when it magically disappears again.

According to a previous discussion on the Apple Discussion boards, you should sign out and sign in again in your Store settings.

And if that doesn't work, their is always another fix, which involves downloading a 3th party software. No jailbreak required!

5
Apps not installing/updating instantly on iOS 5.1
1
iPhone App Store Stuck
8
"Unable to Download"/"Unable to Install" on iOS app update
6
Unable to install app from web on iOS 8
15
Can't download apps from App Store as get button doesn't start download
1
Rating or reviewing an app from the App Store on iOS always silently fails. How to fix?
2
"Cleaning..." phase when deleting apps