The new laptop is running just fine. It's super fast. However, memory pressure is usually in the yellow. On my old system (MacBook Pro mid 2018 with 16GB RAM), I was hardly ever in the yellow.

Even when memory pressure is in the yellow on the new system, the computer seems totally fine - no fan, no lag, nothing.

Should I consider upgrading to 32GB? Something seems off about this memory pressure. I read something about this possibly being a bug in macOS Monterey. I don't want to needlessly upgrade for budget reasons. 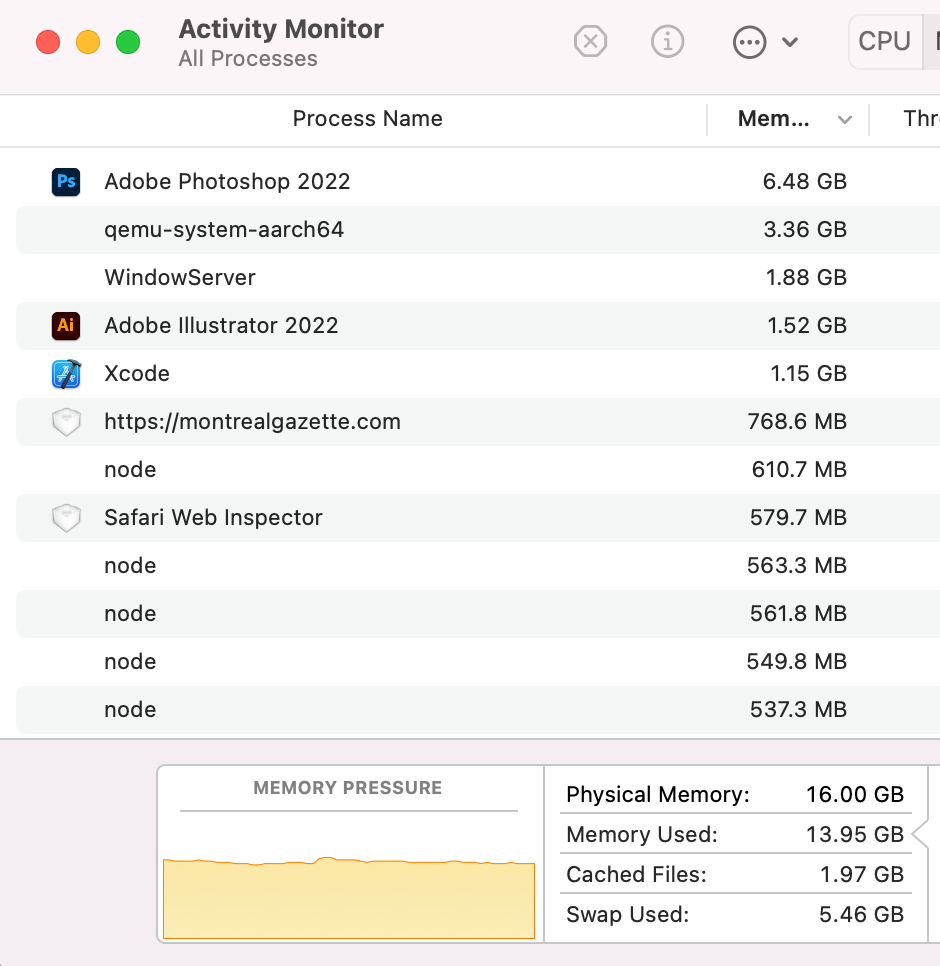 ***** UPDATE ***** After updating my system to Monterey 12.1, memory pressure has improved. It's still often in yellow but I'm not noticing any performance issues.

The only number here that may be abnormally high is that of Photoshop, at 6.48 GB, and that's high only if you have just opened the app with no open documents yet. I seem to recall that Photoshop has its own memory management system that is very grabby and it maintains a private cache of documents and operations histories which it will hold on to until there is internal memory pressure. Make sure you're capturing these screenshots right after rebooting your Mac and first opening Photoshop so that nothing is cached yet and we're seeing the "baseline" state.

I should note that 16 GB isn't a lot for a dev/design machine these days, and it will only get worse as the years go on and software naturally bloats. Also note that part of your memory is being used for VRAM so you'll have less than 16 GB available for app runtime. You may be setting yourself up for frustration a few years down the road when you realize you just don't have enough physical memory to keep up. (BTW, you can't "upgrade" your MBP to 32 GB; you have to sell it and buy a new machine. Apple stopped allowing user upgrades of DRAM years ago. From your question it's not clear that you're aware of this fact.)

OTOH, bugs happen, and you may be experiencing a software fault that's causing a steady leak. If so, it will likely get fixed and you'll be in better shape.

For now, if you want something actionable, we should try to understand where all this memory is going. Let's collect more information. First, in Activity Monitor, make sure you are displaying the "Real Private Memory" column (View > Columns > Real Private Memory) and do a descending sort by it.

Next, let's pick an app that you think is using excessive real private memory. Run the vmmap -w command on it using its (partial) process name or process ID (PID). For example:

Upload a text file with the output to something like www.PasteBin.com and amend your question with a link to it and we'll take a look to see where allocations are highest.

Certainly, the new M1s have shown themselves to perform remarkably, even under very high memory pressure and with high swap usage.

As you yourself say, the performance is 'fine'.

But, RAM requirements are only likely to increase, and more RAM is always better than less RAM. The system uses that RAM for the GPU and CPU, so if you're using an external monitor and/or running tasks that use the GPU a lot (which Photoshop is likely to do), then RAM usage will be higher than on an Intel with discrete GPU.

If you decide to go for 32GB, you'll need to return the MBP to Apple for a refund, and then buy another. The RAM is part of the System-on-a-chip. The refund period is usually 14 days, but if you smile sweetly, you may get some latitude.

(I have also seen reports of notable memory leaks in Monterey, but that's likely to be fixed in the short term.)

0
How can I see whether or not my M1 Macbook is memory constrained or not?