I have researched this and am getting conflicting answers. The official docs aren't helpful, as they don't specify this. I found this related question on Apple forums, and some answers there say it's possible.

But then I asked the specific question there myself, and got an opposite answer.

I called Apple, and the rep also said that this is not possible even with the M1 Max (only one monitor per port), but I am not 100% confident in their knowledge.

People here are sharing their personal experiences and confirming that it does work with specific setups.

This one will do it with one cable. Note that it does not use (or need) Thunderbolt 4 to do so:

No, it's not possible. There are exceptions that I'll get into but generally no, that is not possible. This has been a long time complaint of Apple computers and it does not appear Apple is going to change this.

The main issue is Apple does not support MST, multi-stream transport, over DisplayPort. This means one port supports only one display.

The exceptions to this are displays controlled by a separate GPU. Someone could plug in a dock with a DisplayPort output and USB, and then use a USB GPU like those made by DisplayLink to drive the second display. Some docks have DisplayLink GPUs built-in to them for multiple displays. Another means to get an external GPU is with a box that is clearly labeled an external GPU. These are docks with a primary function of adding additional graphics processing, though this processing is available to be used on an internal display as well as external displays. These eGPU docks will tend to have other ports like USB and Ethernet but some do not as their function is to be a GPU, not a general purpose dock, and so may lack such ports as they take valuable bandwidth.

If connecting two displays by one Thunderbolt cable is important to you then you are going to have to pay for it. There is no cheap resolution to this. Windows will support two displays on a single Thunderbolt port but you pay for it in a different way, lower video performance. Two 4K@60 displays on one Thunderbolt port is asking a lot, if it works at all then it's likely by "cheating" with compressed video. Maybe the math works out and no cheating required but it's getting real close to the limits of the cables.

DisplayLink and eGPU get by with less bandwidth on the cable to the computer because the video is still a stream of descriptive bits at that point. After processing into the full uncompressed video frame there's more data. After processing there is more bandwidth consumed on the cable to the display, one 4K@60Hz consumes more data than one DisplayPort channel can hold. Supporting two 4K displays means using all 4 "superspeed" channels in the USB-C cable for video, leaving no channels for Thunderbolt or USB 3.x, or multiplexing the DisplayPort video into the same "superspeed" channels, which is a feature not all displays and docks support. I speculate but it's likely safe to assume Apple didn't want to confuse users with the long list of technical requirements on what is needed to get two displays on one Thunderbolt port to work and simply says it is not supported. They "enforce" this limitation by not including MST support in their OS and drivers, without MST there's no multiplexing two DisplayPort streams on one cable.

Yes this is possible. I'm doing this with a Thunderbolt 3 dock. Specifically HP G2 Thunderbolt Dock G2. The crux is to connect one display to the DisplayPort and the other to a Thunderbolt port (provided your dock has one). Based on the specs listed on Apple’s website your MacBook is capable of running 2x 6K@60. The dock merely acts as Thunderbolt pass through. So you should be good.

This is inline with the statement in Apple's support article About the Thunderbolt ports on Mac:

Dell has instructions for this specific setup (2x 4K@60Hz) with their WD19TB Dock: 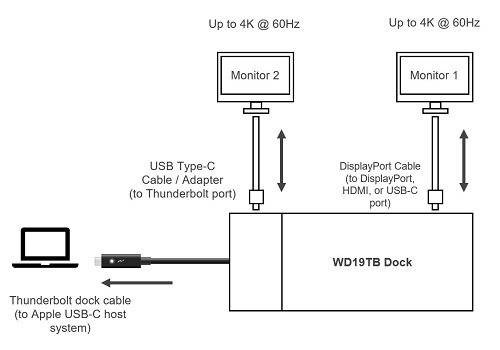 Dell also instructs to connect one display to the Thunderbolt port on the dock and the other to Displayport or HDMI.

Wirecutter mentions a similar setup in their review of Thunderbolt docks:

The second Thunderbolt port allows you to pass through data from Thunderbolt accessories. You can hook up two 4K monitors at 60 Hz, too,

OWC, known for its Mac accessories, also has a dock that can do this. On the page about this dock, they refer to an infographic on Thunderbolt.

My specs below for reference. 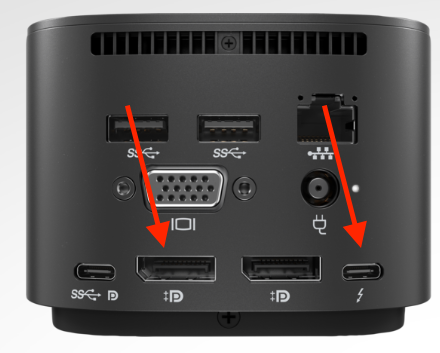 M1 Mac can have only one native external display connected. However, it had been improved with M1 Pro Mac and M1 Max Mac systems(released after 10/2021. The new M1 Pro or M1 Max Mac systems can support up to 6 external monitors at the same time totally.

I had tested and proofed this new video supported capacity with the new M1 Pro/ M1 Max accordingly.

Not the answer you're looking for? Browse other questions tagged macbook-pro mac display thunderbolt m1 .

51
How to connect two non-Thunderbolt displays to the Macbook Pro 2011 via Thunderbolt?
2
How to get 3 1900x1200 monitors working on a 2010 Mac Pro
4
Connect 2 external Monitors with Belkin's Thunderbolt 2 Express Dock HD
2
Is it possible to prevent specific backups from getting deleted?
1
MacBook Pro (Mac OS X Mavericks) not displaying full resolution on external Philips QHD monitor
21
Connecting 3 monitors to macbook pro 2018 via thunderbolt 3
6
Is there a 1 cable solution to connect 2 monitors in extended mode and charge a MacBook 15" at the same time?
0
Connect Early 2015 Macbook pro to TWO HDMI monitors via Thunderbolt or USB
0
how to connect 2 monitors in macbook pro 2020