What does the “4G” that appears on my iPhone 4S's AT&T network indicator mean?

Since upgrading my iPhone 4S to iOS 5.1 (from 5.0.1), the AT&T network status indicator now reads "4G" where it once read "3G". What has changed from the previous version? Does this "4G" mean the same thing as it does on the "new iPad"?

The terms 2G, 3G and 4G do not refer to a specific wireless standard, but a a whole bunch of different standards:

There has been controversy on what standards should be referred to as 4G. When Apple introduced the iPhone 4S, they followed other companies in referring to HSDPA as a 4G standard. HSPA+ is the successor to HSDPA. 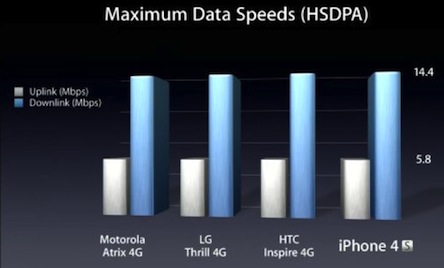 Technically, HSDPA and HSPA+ are 3G wireless standards. However, HSPA+ has received technological upgrades which increased the theoretical throughput to become similar to that of LTE.

If 4G were to indicate speed rather than a wireless standard, it's legitimate to refer to the upgraded HSPA+ as 4G. However, this improved HSPA+ should be referred to as DC-HSPA+, not merely HSPA+.

It means that you are connected on HSPA+. It's actually a 3G technology, and unfortunately, you probably won't experience any speed increase in downloading or surfing.

The 4G technology for the "new iPad" is LTE, and is much faster than the existing 3G band.

The 5.1 update provides a labeling change for iPhone 4S users - "3G" is now "4G". As the other answerers have noted, HSPA+ is technically considered a 4G technology. A MacWorld article states:

The 4G label in iOS 5.1 instead reflects AT&T’s perspective, namely that the carrier’s HSPA+ network (also known as Evolved High-Speed Packet Access) qualifies as 4G technology. Carriers tend to refer to both HSPA+ and LTE—the cellular network technology built into the new iPad—as 4G, though the inner workings of the technologies are vastly different.

The new iPad, however, uses LTE, a different 4G technology. There's more information about the differences between LTE and 3G in this MacWorld article.

Not the answer you're looking for? Browse other questions tagged ios cellular-carriers 4g .

8
What data does the Carrier IQ daemon log from iPhones?
3
Is the 3G network used by the iPad the same as the 4G network used by the iPhone?
2
What does each cellular connectivity indicator mean?
7
What does the spinning circle next to the network indicators on iOS mean?
6
Where can I find information about past versions of iOS and code-signing windows?
2
iMessage Security issue: Typing Status Indicator Actually sends what you are typing?
1
Why doesn't the iOS status-bar network activity indicator show all activity?
1
What do these Bluetooth icons shown in iOS status bar mean?
9
What does Apple's new App Store requirement mean