Since moving to zsh from bash my previous AppleScript scripts can no longer find executables that are in my path, unless I use the full path to the executables.

What can I do to keep using zsh and stop having to enter the full path to the executable in my AppleScript scripts?

I feel like I am missing some configuration setup for zsh or for AppleScript.

example script was not working:

working with full paths to execs:

Would it have anything to do with running these scripts under bash first. sh does know where the executables are.

Second, when you use just a command name instead of a complete path, the shell uses a list of directories (known as your PATH) to try and find the complete path to the command. For security and portability reasons, do shell script ignores the configuration files that an interactive shell would read, so you don’t get the customizations you would have in Terminal. Use the full path to the command, for example, /sbin/ifconfig instead of just ifconfig. To find the full path in Terminal, say which command-name, for example, which ifconfig; to see the list of places do shell script will search, say do shell script "echo $PATH".

Still don't understand why all of these scripts worked without the full path when bash was my default shell and are all broken now that zsh is my default.

Any application launched from the Finder gets the same default environment: a working directory of / and the environment variables HOME, LANG, PATH, SHELL, and USER. Most applications do not change their environment, but relying on this is a maintenance risk.

Unless you've done something highly creative, Script Editor is using sh to run shell scripts. It does not use your configured shell.

That points to a copy of bash by default.

When bash is invoked (as a login shell) as sh, it only reads /etc/profile and ~/.profile. But it reads no startup files otherwise. So it is not reading any shell configuration you think you are providing.

So you should be just inheriting from the system. 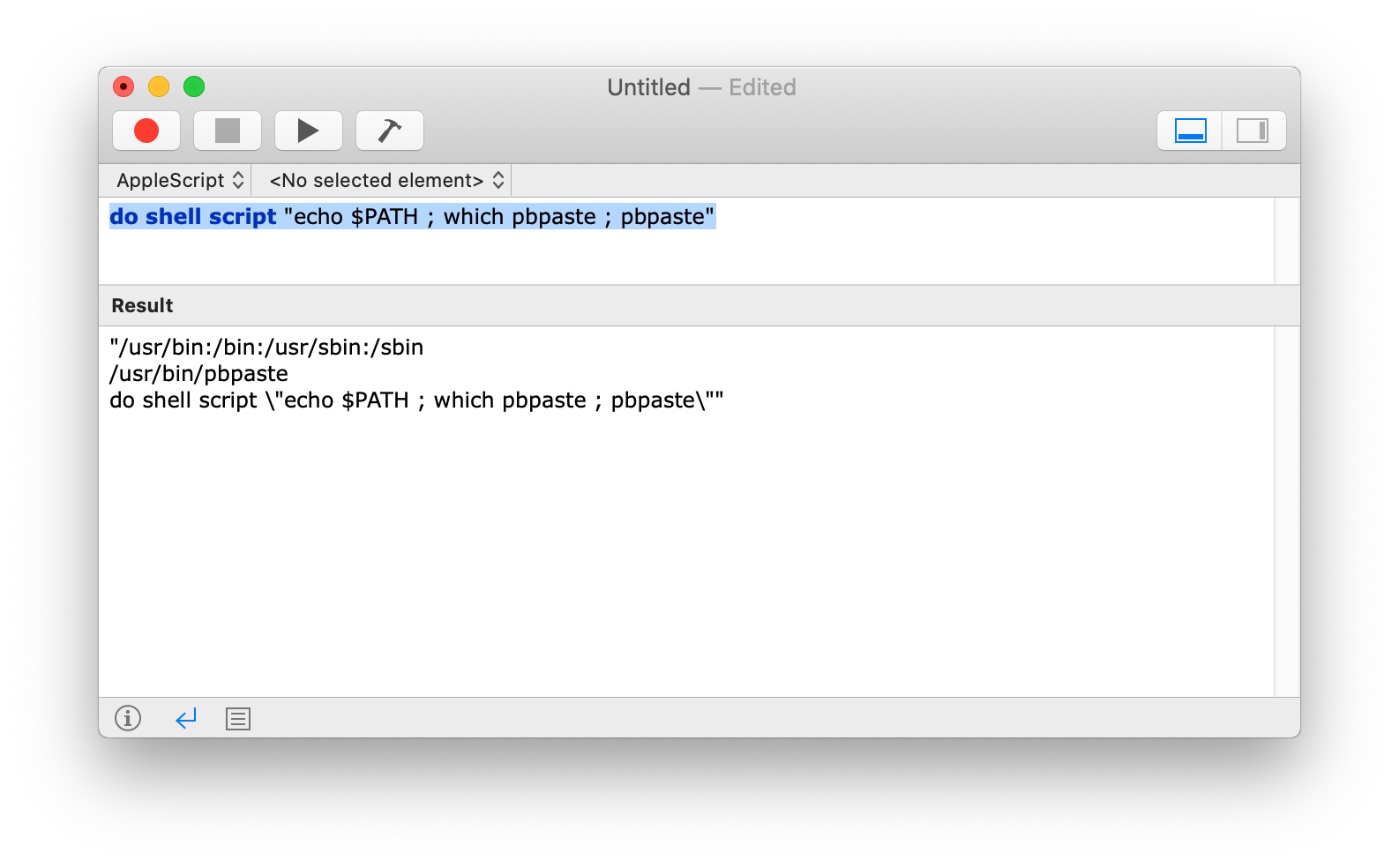 Note that pbpaste is findable since it's in /usr/bin and the default path includes /usr/bin.

Since that doesn't work, something else has been changed.

3
Characters do not echo in OS X terminal unless I hit the delete key
16
In OSX Yosemite, why can I set many environment variables for GUI apps, but cannot set the specific variable PATH
1
Automator: "Run Shell Script" throws error because of missing "on" command
19
How do I add a directory to PATH when using `zsh` in Sierra
3
Erased /usr/local/bin directory by mistake
1
How does zsh find commands?
2
Script menu: how to reference user-path utilities (PATH / environment is missing)
0
Setting up env command for bash scripts