Can I direct the audio signal from Apple TV?

I have the following equipment: 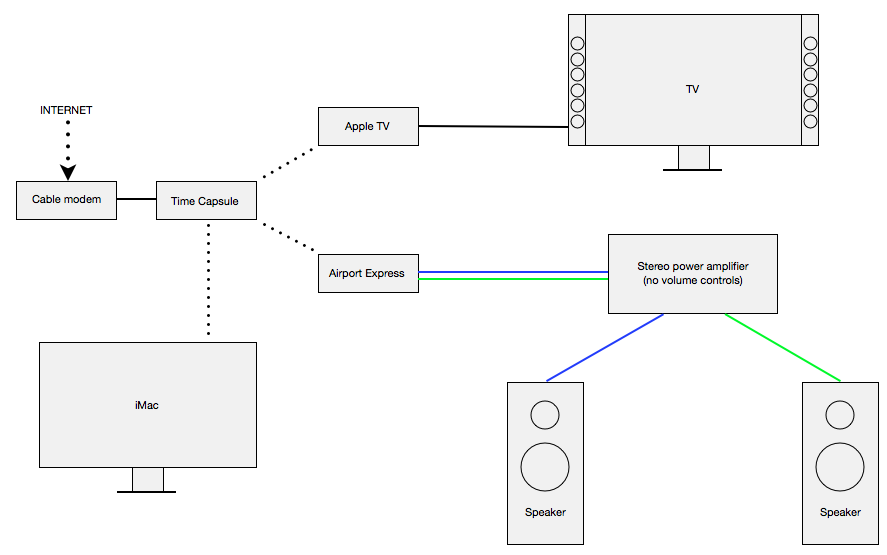 I have all my music files stored in iTunes on the pictured iMac. When I play music it follows a path from the iMac through the Time Capsule to the Airport Express. The Airport Express connects by hard wires to a stereo power amplifier (that has no volume controls, selector switch, or additional connections available) and from the amp to the stereo speakers. I control all of this directly from the iMac using the iMac's volume control. This all works great and sounds great.

As the diagram also shows, I have an Apple TV that connects to the TV.

In our house we predominantly watch Netflix or other content via the Apple TV.

I'd like to direct the audio signal from the Apple TV to the Airport Express and thus to the amp and speakers.

I know I could put in an additional device and hardwire the TV's audio outputs, stereo amplifier, Airport Express into it (essentially use it as a switching device), but it just seems that I should already have everything one really needs already.

Any way to do this?

Looking at the suggestions offered and doing a bit more research on my own it seems like the easiest solution would look something like this: 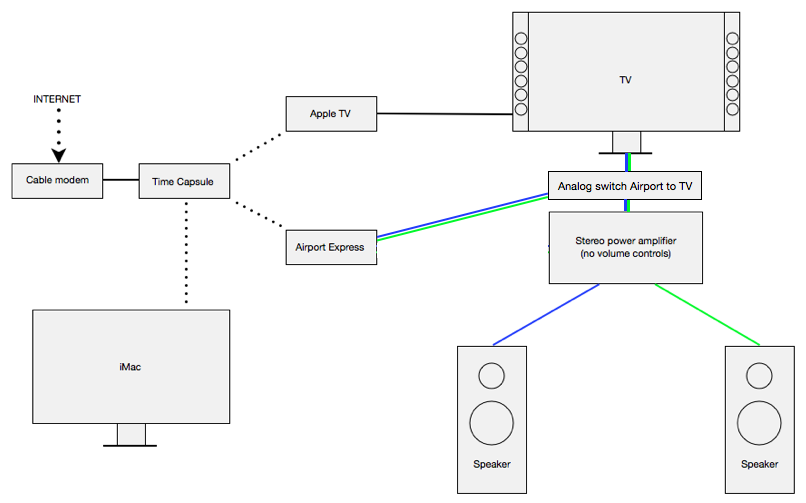 This solution depends on a few of things:

A remote control for the switch would be nice.

Any suggestions for such a device?

But you will need an extra bit of hardware, as your amp doesn't have optical in. You'll need a digital to analog audio converter (here's one on Amazon). They are usually $40-$60 in price.

I don't believe it is possible to send your audio signal from the appleTV to the Airport Express. You will need to use the amp as your switcher.

Time to pick up a new receiver, or at least an external 2-port optical switcher (?) to put between the 2 Apple devices and the current amp.

To answer the follow-up question in the comment below, I can't recommend an optical switcher, but there are models out there. This switcher seems popular, but double-check that it can handle both types of optical cables. You might need an unusual one from the Airport Express to the switcher, but the ATV uses a fairly standard one.

On the Apple TV , Go to Settings: Airplay: Speakers:.....you should see your airport express as an option for wireless audio out

Not the answer you're looking for? Browse other questions tagged itunes imac airport appletv time-capsule .

6
What are some cheaper alternatives to Airport Express that allow music streaming?
5
What devices can receive an AirTunes signal?
6
Can I set up an Apple TV to receive content from a Synology NAS?
3
Possible to use iTunes, Airport Express, and Apple Remote together?
0
Can AirPort Express add speakers to a network without broadcasting a new wifi signal?
2
How can I send audio to airport speakers from a stereo system, not a computer?
0
Bluetooth Speakers for Apple TV (4th Generation) Volume Control
1
"Unexpected error" while extending Time Capsule with Airport Express
0
Apple TV control external HiFi - difference between direct control or Airplay
1
MBP + iMac late 2012. Target Mode. Audio from iMac not working