How to get Photos People album to populate?

How long should it take for photo people album to populate on new iPhone 13 pro? 5 days new, iOS 15.2 and pics have finished curation but no people have populated to the people folder in Photo app.

Apple senior advisor says he sees a lot of articles outlining issues/problems with app and people folder not populating for current iOS but I don’t seem to find a lot (recent) at all on the net.

I have restarted the device many times, leave it plugged in every night and most of the day, reset memories and People suggestions in the photo settings, still nothing.

Also to add, when setting up the iPhone for the 1st time after purchase I used the over the air - copy settings, info, pictures, etc., from the old phone - by following the setup instructions and having the phones lay side by side while the old phone was copied to the new one. Also, when I connected the new phone to the computer for the 1st time to back it up, Finder also synced Photos, music, etc., too, even though all that stuff was already on the iPhone.

Anyhow, another night plugged in has gone by and still no people showing in the People Album.

what to do to get people album to populate?

10/27/21 Add info..... so as of today, still no people added.... ive removed all synced photos from iPhone, deleted the iPod cache folder from MBP, reset memories and people folder again on iPhone , hard reset on iPhone and safe mode boot on MBP before re-syncing photos. Curation has completed on iPhone but as of yet, no people in People Album......

10/30/21 - add info. still no faces for me in the People Album. Added 2 screenshots - mine presently and my wife iPhone. She only plugs in when needed and has 1 face and the language is different form my screen. We are both now iOS 15.1 and sync photos the same way.

11/25/21 - UPDATE. received email form apple. They are still trying to figure out why the album wont populate. Still no joy!

03/24/22 - UPDATE - Ive heard back form another senior advisor who confirmed that people/faces folder is suppose to scan and add automatically. He said the fix was to update to iOS 15.4 and Monterey on Mac side and that the fix was in the updates. When I told him that I have updated to both aprox 2 weeks ago and that the faces / people were still not be added he told me to contact another advisor that he'd been transferred to a different Dept.

So this add people / faces is still not working on my iPad or iPhone. Confirmed AGAIN w/ Apple that this function is to happen automatically by the app. 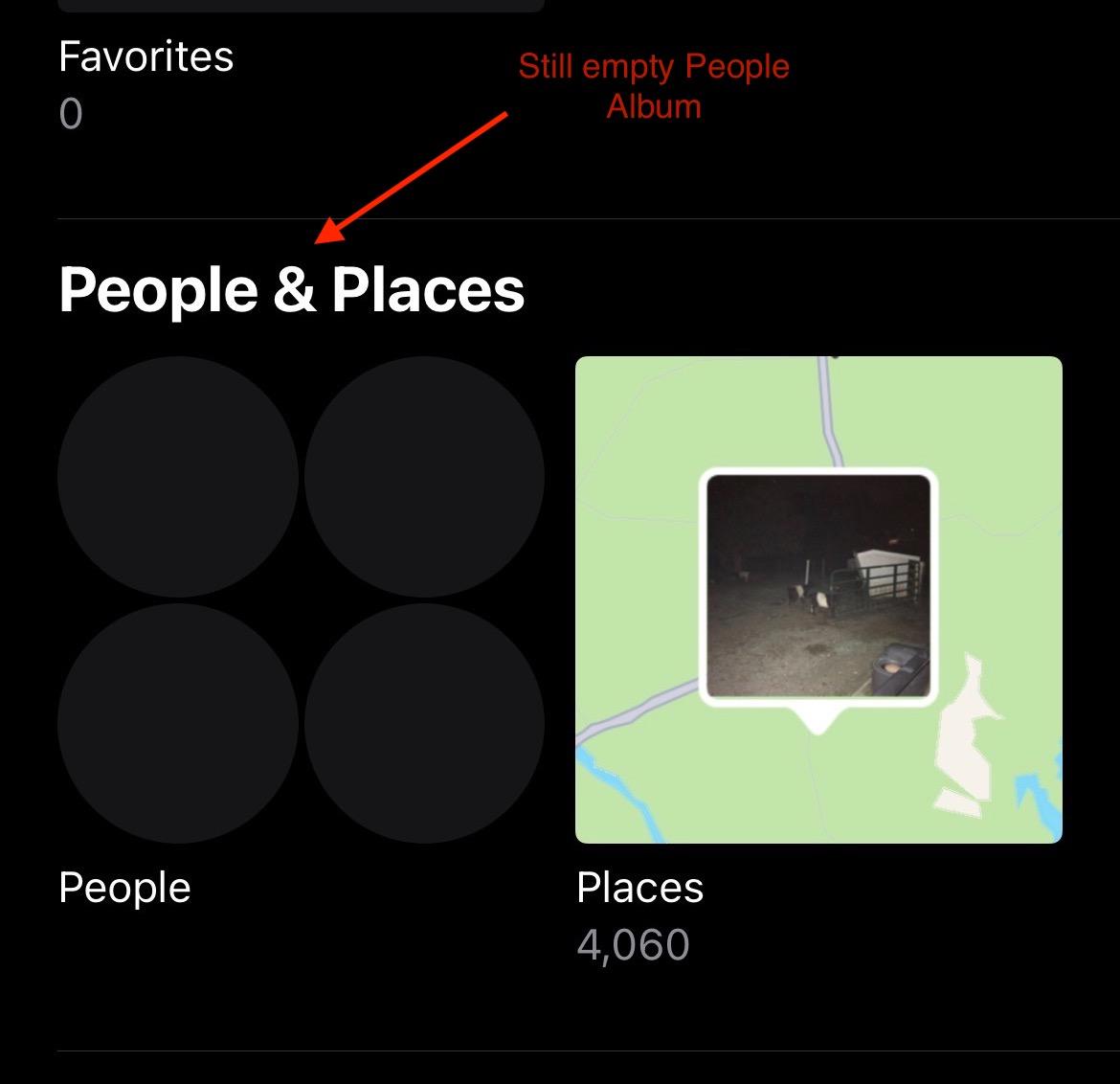 Post 2016 or so, the People album does not seem to update itself with new unnamed faces:

Why is Photos not suggesting new Faces in the People Album?

It's unclear if you've previously tagged/named faces in your library and/or if those tags have made it to your new phone.

Want to see even more People in your album? Just open a photo of someone that you want to add, then swipe up to see a thumbnail of that person under People.

I would recommend going through your photos and manually tagging/naming 10-20 faces, as detected in the details of an individual photos. Once you have done that, the People album should update to show all of those People.

The album will continue to not show new unnamed faces. That's seemingly by design.

Not the answer you're looking for? Browse other questions tagged iphone ios photos .

2
Why is Photos not suggesting new Faces in the People Album?