The Ethernet cables connect to the Thunderbolt port via a dock supporting a 1 Gbps networking and my router, switch and modem all support 1 Gbps speeds.

I have tried this with two other docks/Ethernet to Thunderbolt ports and can reproduce the issue.

Whenever I restart the machine or I freshly connect the dock (or even just the CAT cable to the dock), I get the specified 1 Gbps speeds on my machine.

If I disconnect and reconnect the dock or the network cable, it sometimes fixes the issue and sometimes it doesn't and my speed is limited to 118 Mbps (exact).

The My Network → Advanced setting on my Ethernet looks like this:

And it shows T1000 with duplex. I have tried all suggestions on various Apple forums like this one and they haven't worked for me.

It is like the Mac suddenly decides that it cannot support 1 Gbps and switches to 118 Mbps (why exact 118 Mbps though?). 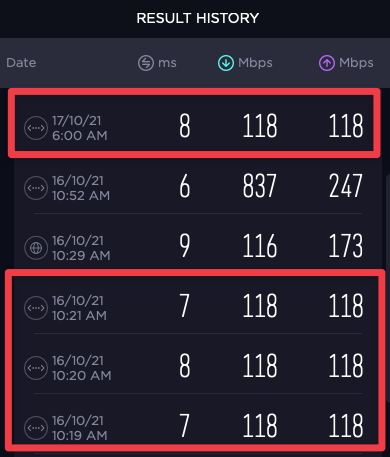 What setting can I check/change to fix this issue?

As per some suggestions, I ran an iperf3 test between two MBPs on the local network and got about 940 Mbps. 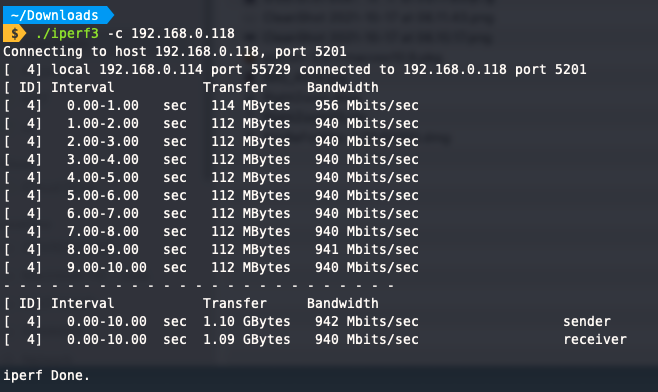 Checking for ISP caps via a secondary device over Wi-Fi

When I get low speeds on my Ethernet, switching to Wi-Fi or testing on my phone (over Wi-Fi), gives me substantially higher speeds - around 200 - 300 Mbps. So I doubt it is an ISP cap (possible, but unlikely).

It was not the Macbook but my router doing some QoS :|

After encountering iPerf3 showing 940 Mbps and my Speedtest reporting 118 Mbps, I started dismantling my network and connecting my Macbook at various levels right until I connected it directly to the modem. (Modem was 1 Gbps and router was 118 Mbps).

(I had also procured a Windows machine and connected it to the LAN which was also capped at 118 Mbps. That proved that it was not the Mac but something to do locally with my network.)

Turned out that my router (I have a TP-Link Deco) has a QoS setting which is set at 120 Mbps and when a certain number of devices connect / there is enough network activity, it restricts speeds to 120 Mbps. (Hence the 118 Mbps on speed tests).

The reason I was thrown off initially was because my phone was showing higher speeds when my Macbook was being throttled.

This turned out to be due to the fact that my phone was registered as a higher-priority device and the router skipped the QoS on it and allowed its full bandwidth. 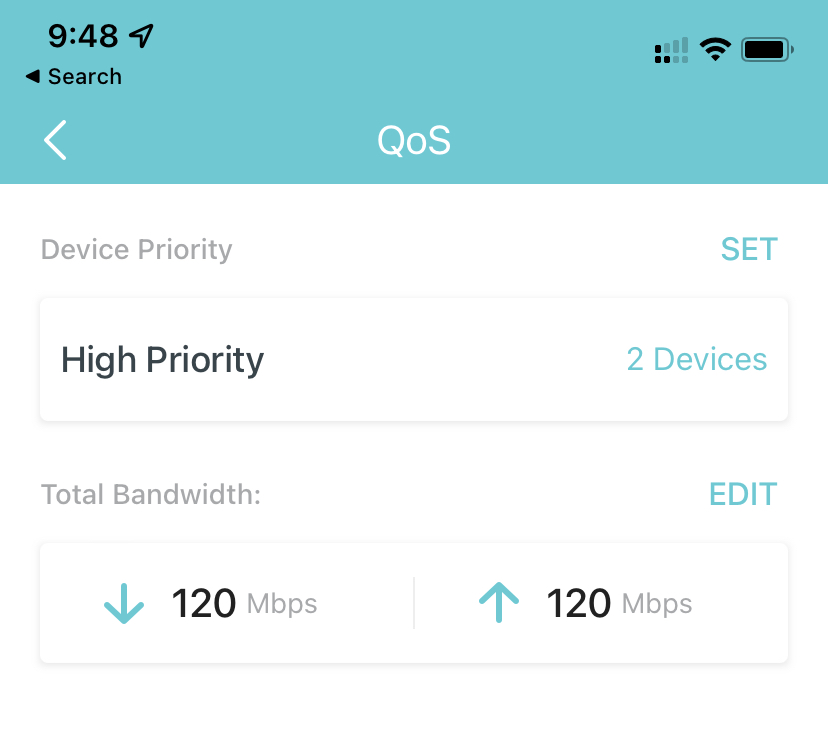 MacOS does not come with such a restriction. There's no built-in feature that limits transfer speeds to 118 Mpbs (or similar value) after while.

You can build such a feature yourself using the included pf packet filter, but I assume you have not done so.

As your network settings show that the speed negotiated between the ethernet port on the dock/Mac and the switch shows as 1000Base-T then you do have a 1 Gbps link.

You're using an unreliable way of determining speeds by using SpeedTest. I would not recommend that for testing speeds on your local network. You could simply be throttled at the server or ISP - i.e. after you have spent an amount of bandwidth over a small period over time, the server or ISP put in place throttling to ensure that you do not overuse their bandwidth.

If it's not a software based issue, it's likely hardware. I'd replace the network cable with a known good one. Even cables that look OK can have issues.

Cables and dongles are always an easy ground zero to address. Try those and unless you have dedicated internet from your ISP, data caps are real. Look into the contract you have with your provider.

Third-party macOS USB-C Ethernet adapters are apparently notorious for requiring excess CPU power on the host, due to driver issues and the lack of offloading support. Even if you've tried multiple Ethernet docks, it's quite possible that they're all using the same chipset and driver so perhaps changing docks doesn't tell you anything.

Have you tried running Activity Monitor while running the transfer to see if the CPU is spiking at some point, and if so, does that correlate with the transfer speed? Or are you running other CPU-intensive tasks on the machine at the same time?

I could even imagine a cascade of issues: for example, the CPU usage could cause thermal throttling to kick in and further reduce the amount of bandwidth available for the computations that cannot be offloaded to the external chipset.

While on that subject, are you plugging in your hub on the left side or the right side?

In either case, as other answers have noted, it's best to test this locally. To rule out any problems with switches or routers, first find another computer with a GbE port on your network, plug a cable directly between the two (most GbE adapters supports auto-crossover so you can probably use a regular cable), and measure the transfer speed directly. (You could, for example, mount a directory and dump a file with "dd".)

Not the answer you're looking for? Browse other questions tagged network ethernet .

0
Why do I need to unplug my Ethernet cable or restart network service to renegotiate connection speed?
646
How to find cause of high kernel_task cpu usage?
42
Bandwidth shaper or bandwidth controller application for Mac OS X