Disk drill is showing files, but they are not accessible in finder

I'm having the common issue where I have a ridiculous amount of storage taken up by "other", and have enlisted disk drill to help work out where the culprits are.

In disk drill, I have ~90Gb taken up by by library, 83Gb of which is attributed to ~\InstallerSandboxes\.PKInstallSandboxManager\ which then holds six folders, all of which are from what look like Xcode updates (folder\root\application\ is Xcode.app in all six) 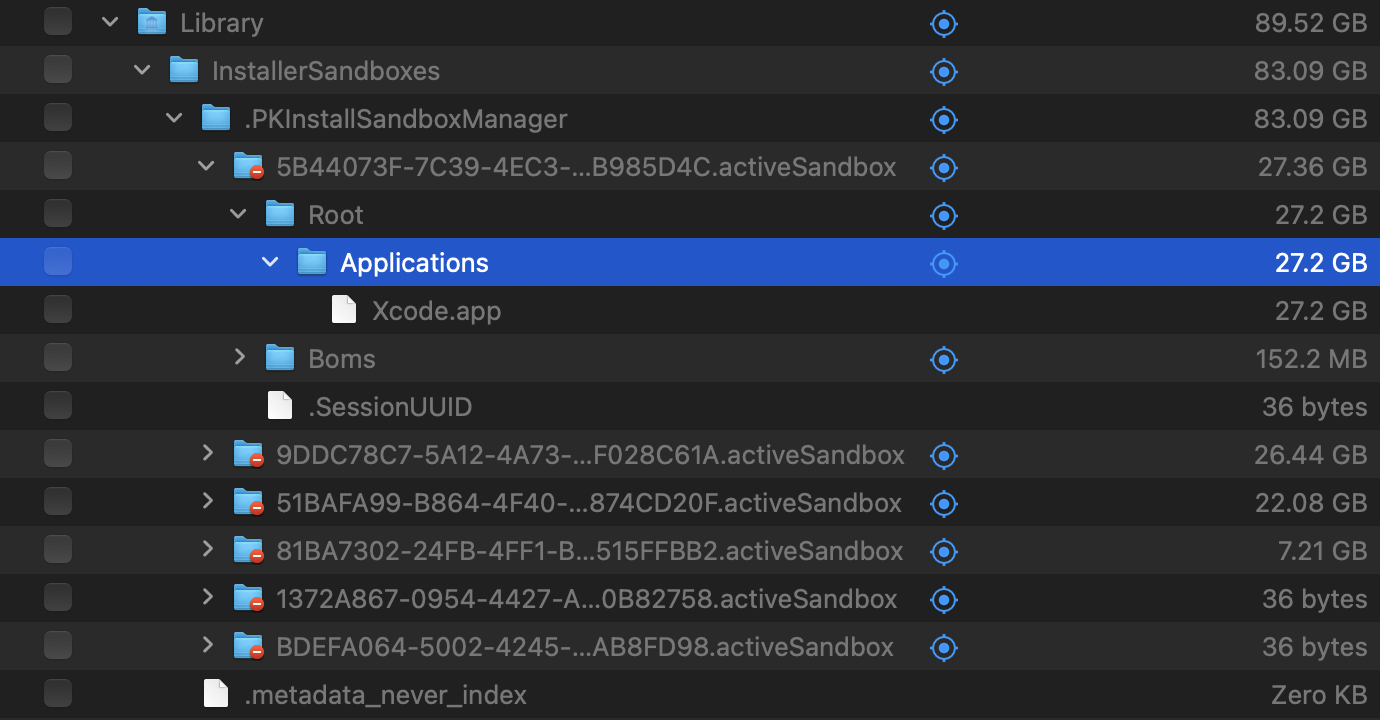 I tried restarting in safe mode to clear the caches, however storage still is showing 100Gb+ in other, and disk drill shows the same image, however now when I navigate to the folder in finder, none of the folders within \.PKInstallSandboxManager\ are visible, and the folder itself, along with the other file in \InstallerSandboxes\ are greyed out.

I've made sure that hidden files / folders are visible, and have found various other threads about folders being inaccessible, and have tried to amend the folder date as this seems to be a recurring issue using SetFile -d ..., but get the following error:

From here I tried changing permissions in the various folders in the path but that's not fixed it. I've also tried moving the folder in terminal to a Temp folder using mv /Library/Apple/System/Library/InstallerSandboxes/* /Users/<username>/Desktop/Temp, however that gives the error zsh: no matches found: /Library/Apple/System/Library/InstallerSandboxes/*

I'm at a total loss as to where to go from here and can't deal with 80+Gb being lost.

What seemed to finally do the trick was dragging the .PKInstallSandboxManage folder into a new note in apple notes, waiting a couple of seconds and then double clicking on the hyperlink that appeared.

.PKInstallSandboxManage is still greyed out, but the internal folders became accessible and I could then delete them from my system.

Not the answer you're looking for? Browse other questions tagged macos xcode file .

2
"The iTunes library file cannot be saved. A folder was specified instead of a file." ...what?
0
I created a 'Image from Folder" using Disk Utility, with Encryption and Files are Invisible
1
Selecting files with one extensions that have the same name as files with a different extension
2
OSX Server 10.9 File Sharing - not working properly
1
WD My Passport 0820 USB HFS+ data disk drive partition problem following accidental use of Recovery Assistant
0
How is Disk Usage Determined?
1
MacOS default folders missing
2
iCloud folders visible in Finder but not in 'file upload' dialog in Safari, how to enable this?