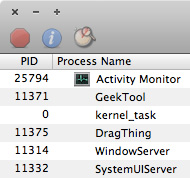 1
How can I kill a process from Terminal using the visible window name?

2
Kill processes automatically that get over x % CPU
35
How do I kill a process that won't die?
2
How do I kill a nameless process that won't die?
4
Process named after website executing?
4
Finding name of a process?
4
Cannot kill Bitdefender process after uninstalling it, no launch daemons found
3
Cannot break running process in Terminal
0
Monitor & restart SecurityAgent Process
1
How can I kill a process from Terminal using the visible window name?