What is the fastest external storage supported on Intel 2020 27" iMac?

I know modern Macs all have USB3 support, but now there's USB 3.1, USB 3.2, NVMe and of course thunderbolt (presumably multiple versions) and I am lost.

What does the 2020 Intel iMac 27" support? What does that mean for data transfer speeds? When buying an external drive what do I need to look out for to make sure it will be compatible with the fastest option?

There are three things which effect compatibility and performance when connecting external storage:

The 5 Gbit/s USB 3.1 gen1 and 3.2 gen1x1 standards are similar to USB 3.0 and storage devices specifying these are generally compatible with USB 3.0 via the USB-A ports.

For an overview of USB standards read Wikipedia.

Thunderbolt is a different connection standard developed by Intel (in collaboration with Apple) when Apple saw a need for a faster connection than that provided by USB 3. The first two iterations of the standard used the Mini DisplayPort physical connector on iMacs, whereas Thunderbolt 3 uses USB-C.

Note that physical USB-C ports which support Thunderbolt 3 have a thunderbolt like symbol next to them.

To further confuse matters (but out of scope for this question) USB-C ports also support connecting monitors using, for examples, Display Port and HDMI standards.

What should you be looking for:

For maximum speed (and cost) you should be looking for a Thunderbolt 3 SSD storage device. These can have performance similar to the internal SSD (~2000 MByte/s). Example: Samsung X5.

And for a slightly more modest cost there are SSDs which use USB 3.1 Gen 2, but internally use SATA SSDs and deliver only ~500 Mbyte/s. Example: Samsung T5. These devices can connect to either USB-C or USB-A ports using USB 3.0, 3.1 Gen1/2 or 3.2 Gen1/2 - the differences in speed are minor as the SATA SSD becomes the bottleneck.

Unless you have a professional need for highest speed, devices like the Samsung T7 (or T5) provide fast secondary storage.

I have just used Samsung as examples. There are other equally good (and some not quite so good) brands.

I have a 2018 Mac mini which has the same USB and Thunderbolt 3 capabilities as your Mac. I also have a Thunderbolt 3 Samsung X5 SSD and a 10 Gb/s USB Samsung T7 SSD. I will base my answers on what I know about this hardware.

When the Thunderbolt 3 Samsung X5 is connected to the Mac through a USB Type-C receptacle (jack), System Information displays the following under NVMExpress. 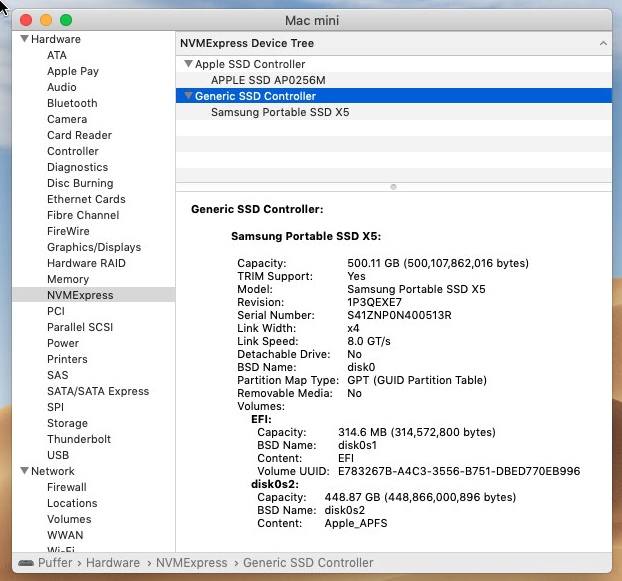 Like the internal drive, the Thunderbolt 3 Samsung X5 appears as a NVMExpress drive, except the drive is external. Note that TRIM is supported. 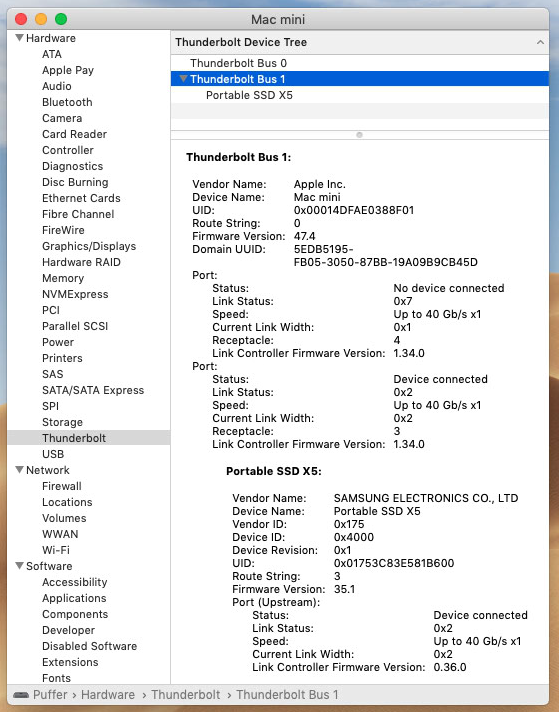 When the USB Samsung T7 is connected to the Mac through a USB Type-C receptacle, System Information displays the following under USB. 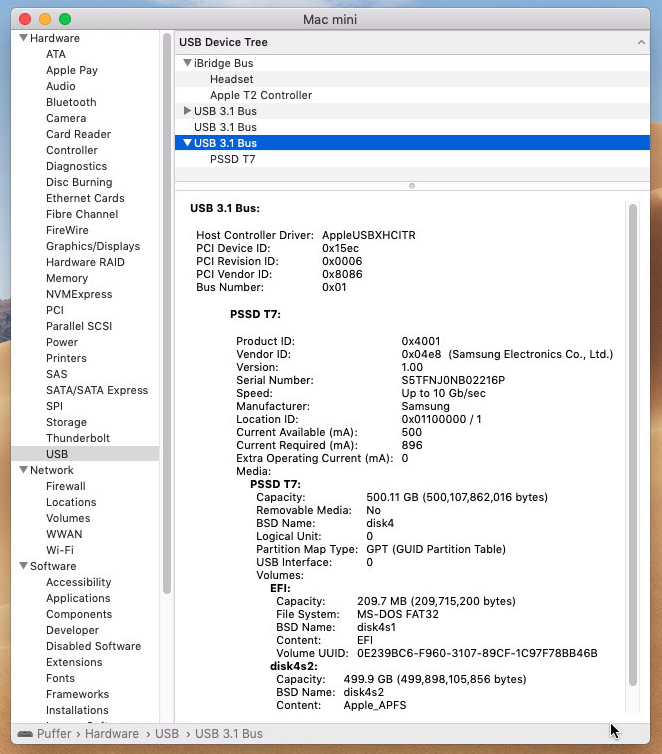 The data transfer speed is unto 10 Gb/s. This is the maximum speed for USB devices connected a USB Type-C receptacle on both of our Macs. There is no indication of TRIM support, which may not be necessary if the embedded PCIe NVMe technology is sufficiently fast.

When the USB Samsung T7 is plugged in a USB Type-A receptacle on the Mac, System Information displays the following under USB. 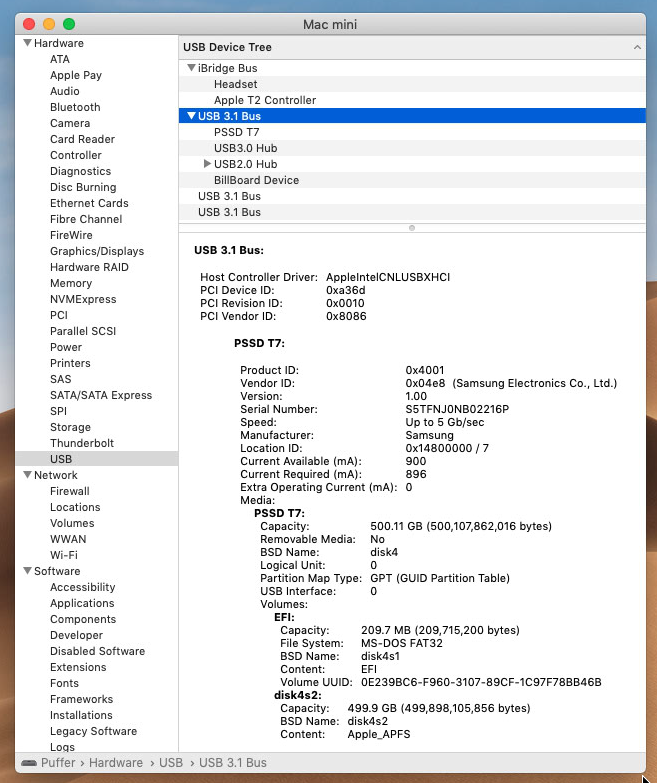 The data transfer speed is unto 5 Gb/s. This is the maximum speed for USB devices connected a USB Type-A receptacle on both of our Macs. Again, there is no indication of TRIM support.

So it's the fastest on your Mac. The externals enclosures SSD Thunderbolt 3 have inside a NVME SSD. For exemple you have the Samsung X5.

The fastest port on your iMac is the Thunderbolt port. It can support data rates as high as 40Gbit/s, which is 5GB/s.

Now most consumer SSDs are pretty fast but won't exceed that theoretical limit of 5GB/s. The fastet you can usually get is about 3GB/s, which you could do with this enclosure and basically any NVME SSD that fits that criteria mentioned in the product page.

About the confusion of Thunderbolt:

Thunderbolt and Thunderbolt 2 was primarily used on Macs and most Windows Computers "only" had USB. Thunderbolt is more versatile than the older USB 2 and USB 1 standard. It is able to support e.g. display connections through the DisplayPort standard which was integrated in the Thunderbolt specs, which normal USB 1 and 2 did not include. Older USB and Thunderbolt ports did not share the same connector so distinction was easy.

If money is no object, an enterprise-grade PCIe SSD via Thunderbolt for >3.5GB/s sequential read or write, and over 1 million IOPS* (IO ops / sec).

Most likely a recent Intel Optane SSD using 3D XPoint memory, not flash, although there are fast enterprise SSDs from other vendors. Numbers in the title are a rough guesstimate of what you might get from an Optane SSD DC P5800X PCIe4.0 drive bottlenecked by PCIe3.0. Or some flash SSD from another vendor that can push up to the limits of PCIe3.0 x4. Or even a bunch of DRAM in a PCIe card, if they still make those.

You said "fastest", not "fastest that might be worth buying for consumer/personal use", so that's the point of this answer: ways in which SSDs can be fast, and how to spend thousands of dollars on a terabyte or more of SSD space that could keep up with many cores on a big Xeon for many workloads.

That machine has a Thunderbolt 3 port, so that gives you a PCIe3.0 x4 connection to work with, much more bandwidth and lower latency / less overhead than USB3.1 or even 3.2, even with UASP (USB-attached-SCSI that bypasses some of the USB protocol overhead and limitations). With the right adapter, that should let you connect an M.2 SSD (like modern laptops and desktops use for high-performance SSDs). Or with something designed as an external GPU enclosure, should give you a PCIe x16 card slot (electrically only x4 from Thunderbolt) with cooling fan, letting you use enterprise SSDs with serious heat-sinks designed to go in motherboard PCIe slots. e.g. like this one that came up in a search result.

(Sustained SSD performance typically involves some serious heat in the controller, e.g. 21W for a high-end Intel Optane DC like P5800X, so a heat sink is required to allow continuous operation without having to throttle to avoid overheating. M.2 consumer drives often will need to throttle if you run them hard, but usually that only happens during artificial benchmarks; real use is typically bursty like copying a few tens of GB for a few seconds and then going back to idle.)

The NVMe driver interface standard for computers to talk to SSDs means that you wouldn't (AFAIK) need a special driver to use enterprise-grade SSDs with a Mac. (The very fastest non-volatile storage memory is probably Optane DC PM that comes in DIMMs that you plug into memory slots (like this), for use with Cascade Lake and later server CPU, letting user-space processes truly map the storage into their own address space, bypassing the kernel and letting drivers control access via virtual memory page permissions. It's pretty neat, but you couldn't use it with an iMac).

SSDs that use 3D XPoint instead of Flash can be very fast, especially for small writes and for mixed read+write workloads, so that's what you'd want to go for in this hypothetical scenario. SSDs built around 3D XPoint instead of flash are definitely optimized for speed over capacity and price.

PCIe is backwards compatible: a drive capable of PCIe4.0 plugged into a slot / cable / adapter only capable of PCIe3.0 will negotiate the fastest speed both sides are capable of, so a super high-end drive like an Intel Optane SSD P5800X (2.5" NVMe PCIE4.0 x4) (review) can still run at PCIe3.0 speed.

Thunderbolt 3's PCIe3.0 x4 interface (32.4Gbit/s i.e. ~4GByte/s raw interface bandwidth) will be a bottleneck for sequential transfers, instead of the drive's native capability of up to 7.4GB/s read or write. You might still be able to get close to the 2 million IOPS mixed read+write operations this drive claims to be capable of, for small mixed read+write, though. (up to 1.55 million random 4k read IOPS, up to 1.6 million random 4k write IOPS). Also, the low latency guarantees should fully apply, like <6 us for 99% of small requests, and <66 us for 99.999% of small requests.

(I'm not sure if Thunderbolt adds any meaningful amount of extra latency to PCIe transactions beyond the few nanoseconds of light-speed delay from cable length and a few gate delays from muxing. wikichip shows some details of Thunderbolt 3 in Ice Lake, but doesn't go into detail about if/how Thunderbolt encapsulates PCIe packets.)

That drive comes in U.2 and E1.S form factors. U.2 is like a 2.5" laptop / server drive, but with PCIe connectors instead of SATA, intended to slide into a bay in a storage server. Lets just say that in theory you could connect it to Thunderbolt. See also https://nvmexpress.org/new-pcie-form-factor-enables-greater-pcie-ssd-adoption/ re: form factors.

Something you definitely could use with a Thunderbolt -> PCIe slot enclosure is a DapuStor H3100 which comes in HHHL card slot form factor (Half Height Half Length), PCIe3.0 x4. So the numbers you see on this review are using the same interface speed you could get via Thunderbolt. 3528 MB/s read, 2603 MB/s write, 803 kIOPS random read, 250 kIOPS random write.
This is an eTLC NAND flash device, so obviously it's much slower at random write than the Optane using 3D XPoint. And the latency is worse. MacOS isn't on the supported OS list, but it is an NVMe SSD.

Note that sequential bandwidth isn't the only criterion for storage speed. NVMe has some inherent protocol / driver advantages for low latency and high number of small IO operations per second (IOPS), important if you want to use this storage for a database server for example.

Some storage hardware-review sites do benchmarks that test drives in both low and high "queue depth" situations, i.e. number of outstanding requests in parallel. In a single-user desktop situation, it's common that a program won't do other reads until after the data comes back from the current read. (e.g. loading an executable, it can't run and make open system calls until it itself is loaded). So desktop responsiveness is often more correlated with low queue depth IOPS and latency, like QD 1 to 4.

Im keeping this fairly non-technical, so I'm sure someone will be along to quibble with the details. ;-)

Thunderbolt is "lots of different things". It includes PCIe, which is the standard for connecting devices to computers' motherboards. So instead of having a slot on the board, you now have a cable. It also includes DisplayPort video signals, and power.

This is why you can use Thunderbolt to connect to a 'hub' that provides more USB ports, video ports, SD card readers, and Ethernet. It's a motorway for different vehicles.

Thunderbolt devices will generally be slightly faster than USB ones. And by faster, I mean expensive.

NVMe is a property of the device itself, rather than a 'transport'.

Not the answer you're looking for? Browse other questions tagged imac usb external-disk thunderbolt .

18
Is it possible to install and boot Windows on a Thunderbolt drive?
1
Implications of using a USB SSD drive to run VM images off
0
Maximum external monitors supported by A1418?
2
Connection protocols to enable external drives to connect to late 2015 27-inch iMac
2
USB-C cable for MacBook Pro 2019 16" - fully supported charging cables?
0
External NVMe Sabrent SSD not recognised by Catalina Macbook Pro 16" over USB-C, only USB-A
2
What type of cable can give the highest data transfer rate for an iPhone 5s?