It is really irritating to have to one at a time delete hundreds of cookies/caches from websites I have never visited. (Would that Apple would allow us to block third-party cookies).

Is there an API that would allow me to build my own app in Xcode to handle it in a better way? Or something like Cookie 6 (macOS) for iOS? Or someone else’s open source that I can compile?

I’m not willing to jailbreak, nor to install something with source code not vetted by me or Apple.

For example, clearing all website data and then logging in to Facebook.com adds five third-party cookies. Three of them are from domains owned by Facebook, but do not end in Facebook.com. The other two are obviously from advertising services. 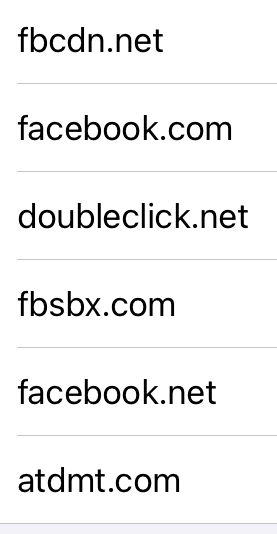 This is why I use DuckDuckGo for almost everything, and Safari only occasionally. DuckDuckGo lets me clear everything after a session. I use Safari for a few domains where I’d like to keep their cookies only, but the cost of that is consumption of storage space that doesn’t benefit me and prevents syncing all the music I’d like.

The cookies are less irritating than the consumption of limited storage space. But if third-party cookies are accepted, cross-site tracking is implied. Since I cleared all website data (recently), I have not visited any site with “math” in the name. Only Facebook, UniGen.us, and three SE subdomains. Yet I have a cookie from mathoverflow.com And Safari says it’s size is zero bytes. Obviously, it is at least one byte. But more of an issue are the megabytes of third-party local storage resulting in updates and Music syncs failing for insufficient space.

There are no APIs for interacting with data from the Safari app, only for web views within the app itself. Therefore there’s nothing third party apps can do without jailbreaking.

Yes, as a user it is very infuriating that Apple does not allow other browsers on ios / iPadOS with better privacy features (all browsers on ios have to use Safari's Webkit rendering engine, and thus all of them suffer from similar limitations).

To better safeguard your privacy on ios / iPadOS, I recommend the following -

Pros of this approach:

I find this approach as a good compromise on convenience vs privacy on the ios platform.

If you want build and customise your own browser for ios, Firefox Focus is a decent open source browser you can use for your project - source code for Firefox Focus for iOS is available on Github.

Not the answer you're looking for? Browse other questions tagged ios safari cookies .

6
Precisely what does "Allow app to track your activity across other companies' apps and websites" mean?

0
iPad Safari Delete Website Data
1
In iOS Safari, why aren't the Facebook social plugin cookies blocked, in spite of the "from visited" option?
0
Safari not prompting for basic authentication
3
How do I right-click in iOS Safari to access website specific functionality?
1
How can I delete cookies for one site in Safari, without deleting local data?
2
Safari on IOS doesn’t save cookies