Will Homebrew installations, root password, hidden users, etc. carry over with Migration Assistant? or with a Time Machine backup? or something else?

The reason I'm asking again now is because this question was asked TEN YEARS AND FIVE MONTHS ago, which was before back when Mac OS X 10.7 Lion was released! Since then, there have been 10 updates to macOS, so I'm pretty sure the information is quite outdated.

I'm using macOS Mojave 10.14.6, and I've made several changes to the operating system such as setting a Root User passcode, creating a hidden super-user account, overriding Gatekeeper to allow installation of all apps, executing countless commands in Terminal, manually deep-cleaning all traces of a bugged antivirus that would never fully uninstall, installing a boatload of Homebrew, and even keeping all remnants of the fabled Macromedia Flash Player. My Early-2015 Macbook Pro 13" with Retina display runs surprisingly fast, but it was a base model with weak hardware. I recently got myself a Mid-2019 Macbook Pro 15" with Touchbar and the best hardware (except the hard drive is 1TB instead of 4TB, but that's way better than the 256GB I've struggled with for the past 6 years– but it runs Mojave, so I'm happy keeping my 32-bit apps that are not longer supported).

I need to migrate everything, but I don't have time to be picky. Would Migration Assistant do everything I need? Should I install from a Time Machine backup? or is there another way that's not tedious but will be effective and not compromise the newer Macbook's performance? 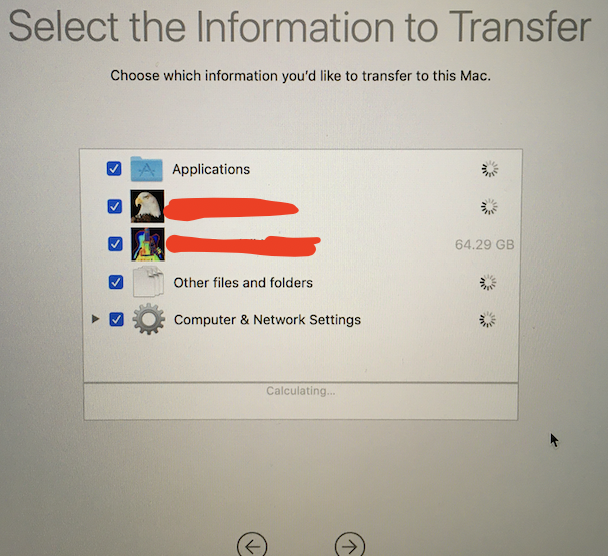 Unfortunately, it does not necessarily not transfer what you tell it not to transfer, nor does it for what you do tell it to transfer for that matter. I told it to exclude one of the users, and that was honored. However, I told it not to transfer certain folders, but it did that anyway. I told it not to import printer settings, but it did that anyway. I told it to import network settings, but it did not regardless. I did have to reconfigure the Root User, but the rest went well… except that a bunch of things went wrong toward the end but I wasn't around to see what they were at the time, so when I noticed the alerts that disappeared the moment I saw them, I became worried. Not a big deal, really. All seems to be operational.

How do I know that all my system tweaks transferred as well? I'm not entirely certain (Gatekeeper will need to be tweaked again, brightness settings are different per the device, and… well, practically everything under the Security & Privacy settings did not transfer [successfully?]), but I had no trouble finding what migrated successfully… at least, I had less trouble when Spotlight finished caching the entire hard drive because apparently it didn't transfer that useful data.

Ironically, it even brought over the broken stuff. Two remnants from my time trying to get Avid Media Composer to work (question mark icons in my Dock, which is still pinned to the right side of the screen like it was on the other device). Probably the most hilarious and frustrating flaw it inherited is my DNS-VPN-Proxy-WiFi-internet-related problem– on which I shall seek answers next.

If you want it to be entirely the same, then you should make a clone of the entire disk using SuperDuper! or CarbonCopyCloner.

Not the answer you're looking for? Browse other questions tagged macbook-pro time-machine mojave homebrew migration-assistant .

12
Migrating to new iMac, what does Migration Assistant actually migrate?
0
How can I repair my DNS so that it doesn't require a VPN or proxy to use the internet? (Anomalous problem)