I recently got issued a Macbook Air M1, 2020 running macOS Big Sur 11.2.3. I rely on Google Drive file stream for my work and I have so far managed to successfully install the program. However, it seems I am having problems indexing the drive with Spotlight. Spotlight does not automatically index the drive, and I need to run: sudo mdutil -i on /Volumes/GoogleDrive/ every time I boot the machine up. It takes a while to index the 80 gigabyte drive and then it works as I like it. The only problem is that when I restart the machine it appears the index is gone and when I run sudo mdutil -s /Volumes/GoogleDrive/ it indicates that indexing is disabled. I'm hoping there's a workaround where the index will stick around so I don't have to enable it and wait everytime I boot the machine up.

There are separate instructions for installing GDFS on an M1 Mac, but since my install worked pretty seamlessly I didn't boot into recovery mode or anything like it suggests in there. I'm wondering if allowing user management of kernel extensions will help this problem, as I'd rather not tamper too much with this work computer.

Here's a step by step workaround for Google Drive v49 (might not work in future versions):

If my script happens to break Google Drive or if you want to reset this change, all you need to do is remove core_feature_config from ~/Library/Application Support/Google/DriveFS/<ACCOUNT_NUM> and restart Google Drive.

EDIT: This isn't as permanent as I thought. It looks like Google can remotely push changes to the "feature_config" file, which they've been doing once a day by the looks of it. When they push out changes, it ends up overwriting the changes my script made to core_feature_config...

At a minimum, you can always rerun the script and restart Google Drive (chain it together with pkill "Google Drive" && sleep 5 && echo "yes\n[PORT_NUM]" | python3 change_gdrive_smb_port.py && open /Applications/Google\ Drive.app). It's not great, but it preserves the Spotlight index database so you don't have to wait / waste CPU cycles on reindexing everytime.

I'll update this again if I find a workaround!

Google Drive used to use a custom FUSE implementation called DriveFS on macOS which appears to have had Spotlight indexing support built in. It appears -- and this is all speculation on my part as I'm not a Google employee -- they had a lot of trouble bringing this over to the new M1 Macs based on this article. Even without that, FUSE implementations tend to be really hairy to maintain, so I wouldn't blame them for wanting to move off of it.

I assume that as part of their Google Drive streaming for everyone roll-out, they wanted to ensure everyone could run Google Drive without mucking with kernel extensions, so they appear to have migrated the Google Drive filesystem to a Samba server implementation, then mount that with macOS's built in Samba client (hence why you now see 'localhost' mounted in Network). Kind of clever if you ask me!

Now, the problem with this for Spotlight is two-fold. First, Apple now defaults to disabling Spotlight on network drives (likely with good reason), thus you now have to manually enable Spotlight on Google Drive.

Second, Google Drive sets the Samba server's port binding to -1, which means the OS picks a random available port for you. I'm not sure when this changed, but Spotlight no longer places its index in the root folder with the name Spotlight-V100. All Spotlight indexes are now stored in /var/db/Spotlight-V100; further, for network drives, that index is named something like smb%3A%2F%2FDRIVE@localhost%3A59999%2FGoogle%2520Drive. If you look closely, the port number of the network drive is part of the Spotlight index name. This is why Spotlight indexing seems to disable itself after some time. When Google Drive remounts the FS (sometimes randomly, sometimes on network disconnects), it's likely it got a new port from the OS to bind to. So to Spotlight, this looks like an entirely different network drive you haven't enabled Spotlight indexing on, thus you have to not only reenable indexing, but also wait for Spotlight to index everything all over again.

I dug around the logs (in ~/Library/Application Support/Google/DriveFS/Logs) and noticed this in the start up section:

so it seems changing the SMB port to a static port is a preference, just got to figure out where. It took me a little bit to find this as it doesn't appear to be a plist setting, but using strings, I was able to deduce it was in core_feature_config which I discovered to be a binary file in the protobuf format. So just had to find the right field and replace the mac_smb_port value with what I wanted (with the right protobuf encoding). Once I figured that out with the right script, Spotlight has been stable for me since!

Don't anticipate this will be an issue for much longer though, so if you aren't comfortable using my script and are willing to wait, I think you can sit tight. Either the Google Drive folks will add a static port number (or setting) to fix this issue or they'll migrate to using the built-in File Provider API (which I discovered you can enable right now by changing a different flag in core_feature_config), which will likely have better Spotlight support built in.

I know that most of you are interested in solving the problem when streaming Google Drive's content ("Stream Files" option on in 'Settings', see @kortina's screenshot).

But for those of you (like me) who ended up reading this post because Spotlight won't index your Drive folder despite using the "Mirror Files" option, the solution is simple: follow these directions and reboot.

Go to System Preferences/ Spotlight. Click the Privacy tab. Drag the Google Drive folder to the list of locations that Spotlight is prevented from searching. Wait a moment and then click the remove button (–) to remove it from the list. Quit System Preferences. Spotlight will now start indexing the folder, which you can verify looking at the active processes in Activity Monitor. When it's done, give your Mac a nice reboot.

Worked for me, will work for you!

This was driving me insane as well, and I was prepared to try setting up a cron to run the workaround python script from @emersonford (which looks great and thank you btw), but I think I may have found a better solution for my needs.

I noticed in GoogleDrive preferences under Google Drive > My Drive syncing options if you change from Stream to Mirror, and then choose a local folder (I did ~/gd), spotlight appears to index all the files! 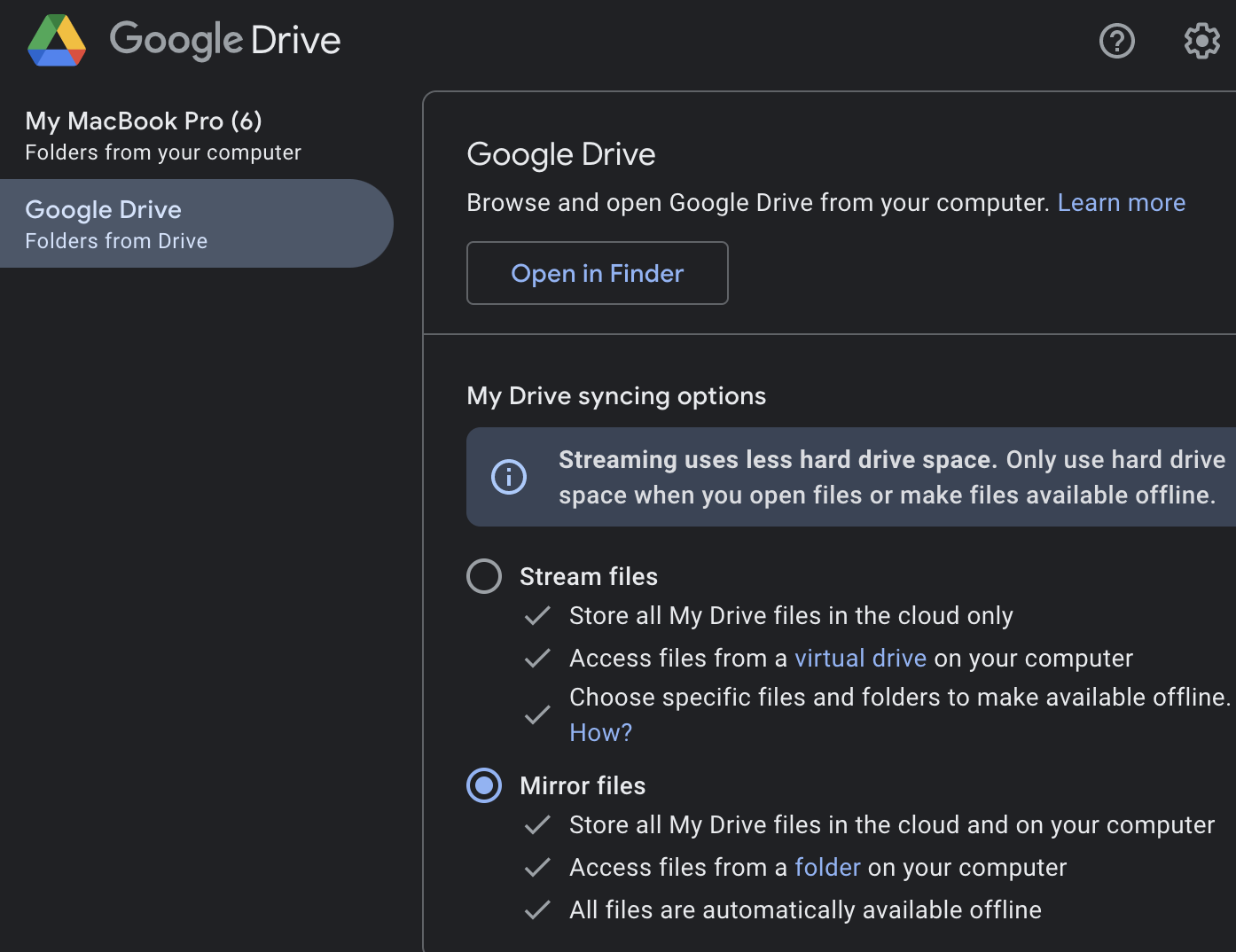 I just now turned this on and it appears to work so far, fingers crossed it continues.

Not the answer you're looking for? Browse other questions tagged big-sur m1 google-drive .